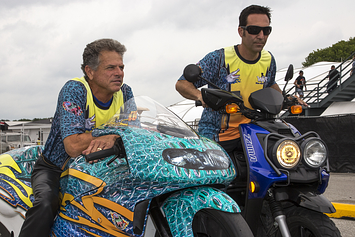 Jerry Savoie finally sealed the deal on his White Alligator Racing Suzuki, earning his first NHRA Wally with a final round victory over Andrew Hines at the NHRA AAA Midwest Nationals in St Louis.  The event also saw S&S racer Hector Arana Jr. move back in to third place in the Mello Yello points with a semifinal finish.

Savoie, an alligator farmer from Louisiana, is popular among the other racers and it seemed like the rest of the Pro Stock Motorcycle riders and team members were behind him as he turned on the win light.

“Drag racing is a family,” said Savoie. “Its amazing that the whole Pro Stock Motorcycle pits were so happy for me.”

There was a time when Suzuki motors dominated Pro Stock Motorcycle racing.  But since the advent of the modern V-Twin Pro Stock motors by S&S and Harley-Davidson, Suzuki’s have been relegated to second-class status.  Of the last ten NHRA PSM championships, only one has been won by a Suzuki (LE Tonglet, 2010).

2014 seems to be the year when they are mounting a comeback.  Steve Johnson opened the year with a win on his Suzuki at Gainesville and for the month before the next event, he let everyone know he was the points leader.

That was the first win by a Suzuki in a while.  You have to go back to 2011 to find the last time a Suzuki won an NHRA PSM event before this year.

Savoie struggled in the beginning of the season losing in the first round at 6 of the first seven races.  Savoie and crew chief Tim Kulungian kept at it and improved until they qualified third at Norwalk.

Savoie was forced to withdraw from the next event on the schedule, Denver, to fly back to Louisiana to tend to his alligator farm, which was under threat of a major storm.

Sadly, his withdraw from the Denver race cost him a shot at the Mello Yello championship as he missed the Countdown field by two points.

At St Louis Savoie qualified second to Krawiec at 6.838 seconds and made the fifth final of his career when he beat Arana Jr. in the semifinals.

Arana Jr. is still the best hope to win the NHRA championship with an S&S motor. He passed Steve Johnson to re-take the third position in the points.  Still, he lost a little ground to points leader Hines who made the final against Savoie. 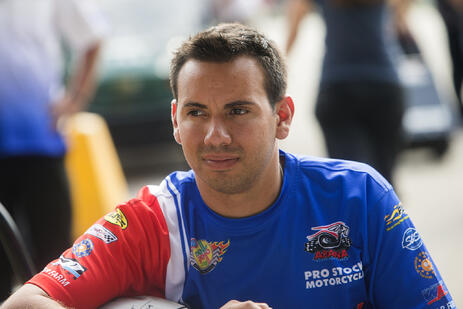 “I’ve been out here for four years and I always said if I win one I’m retiring,” Savoie said afterward.  “Well, I lied…”

As for any regrets on missing the Countdown, there are none for Savoie.

“Hey we got the fastest [PSM] Suzuki on the planet earth,” he said. “And that is a great thing!”

The next event on the NHRA tour is the NHRA Nationals at Maple Grove, PA, Oct 2-5.