The NHRA AAA Fall Nationals in Dallas was a double-dip for racers challenging for the Mello Yello championship.  The race also held the complete elimination rounds for the Charlotte event postponed due to rain.   The Harley-Davidson® team of Eddie Krawiec and Andrew Hines were the big winners with each earning an event win. 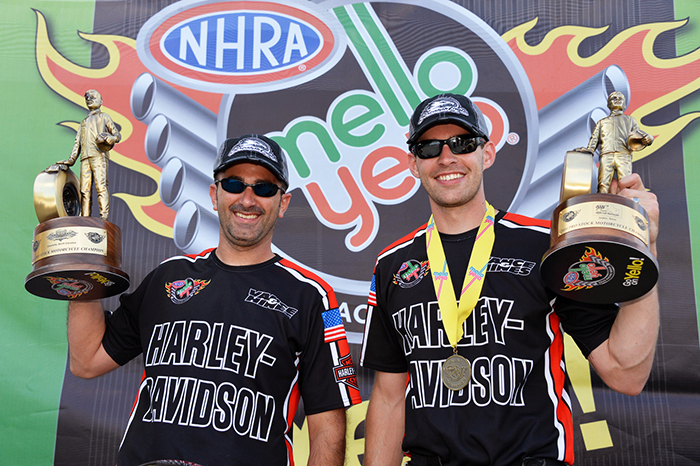 The format for getting two races to compete in one weekend was pressure-packed for the competitors.  After one shot at the track during the first round of qualifying on Friday, each qualifying lap would serve as an elimination round for the competitors still in competition.  The finalists would run the final as a non-qualifying pass late Saturday afternoon.  The Dallas event would be run as scheduled on Sunday.

The event saw the much-anticipated return of 3-time NHRA PSM champion Angelle Sampey who last raced in 2008.  It was a reunion for Sampey and George Bryce of Star Racing who was instrumental in bringing the S&S-powered Kosman Buells into NHRA competition in 2003.

Her return was anti-climatic as she qualified 12th at 6.988 and lost in round one to John Hall. Still, Sampey has never failed to qualify for an NHRA event and her streak of Sunday starts now extends to 184 races.

The semifinals of the Charlotte event, run on Saturday, saw the two Harleys facing off against each other with Krawiec advancing to his third final in a row.  The other side of the ladder was a heartbreaker.  Chaz Kennedy, a rookie riding the Star Racing Buell, had made his first semifinal appearance of his career, but he had a razor-thin -.003 redlight as the Suzuki of Steve Johnson broke in the other lane but still took the win light.

Krawiec took his fourth win of the year in a good race, getting by Johnson 6.88 to 6.91. He also earned the top qualifying position for the Dallas event in the process.

On Sunday, Krawiec spun the tire hard in the first round of Dallas eliminations giving Freddie Camarena his first round win in 11 years of racing on his Danny Griego-backed Suzuki.

The Dallas semifinals saw two Matt Smith Racing teammates get taken out with Scotty Pollacheck getting beat by Andrew Hines and Smith himself losing to Johnson, who made his second-straight final in forever.

Johnson broke a motor and couldn’t make the call in the final giving Hines a single for his fifth win of the season.

Incidentally, Krawiec’s win on Saturday moved him ahead of teammate Hines for the points lead but it only lasted one day as Hines took back the lead with his win on Sunday.

The top S&S-powered Buell riding in contention for the championship is Hector Arana Jr.   Arana Jr. had a good day on Friday, taking the early lead in qualifying with a 6.855 and winning the first round of the Charlotte event but things went downhill from there. On Saturday he lost the second round of Charlotte competition to rookie Kennedy on a holeshot and then lost the Dallas pole position to Krawiec who turned in a 6.841.  It got worse on Sunday when he lost in round one to Shawn Gann, putting a serious dent in his championship hopes.

With his two-straight final round appearances, Johnson and his Suzuki moved to third in the points.  Arana Jr. slipped to fourth. 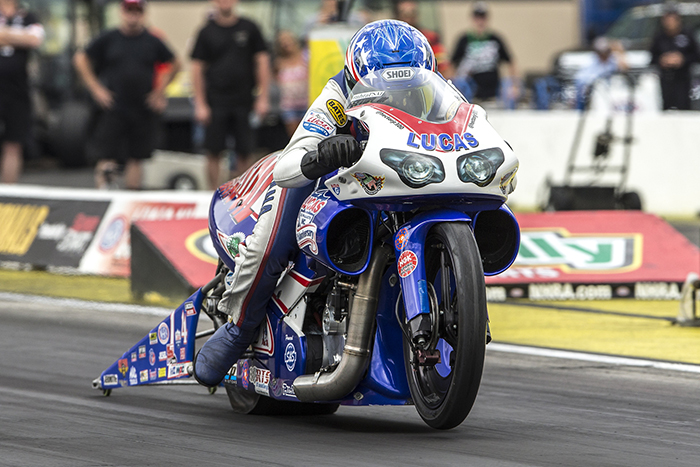 The NHRA Pro Stock Motorcycle racers are currently in a four-week stretch of consecutive races.  The next event on the calendar is the AAA Gateway Nationals in St. Louis on Sept. 26-28.