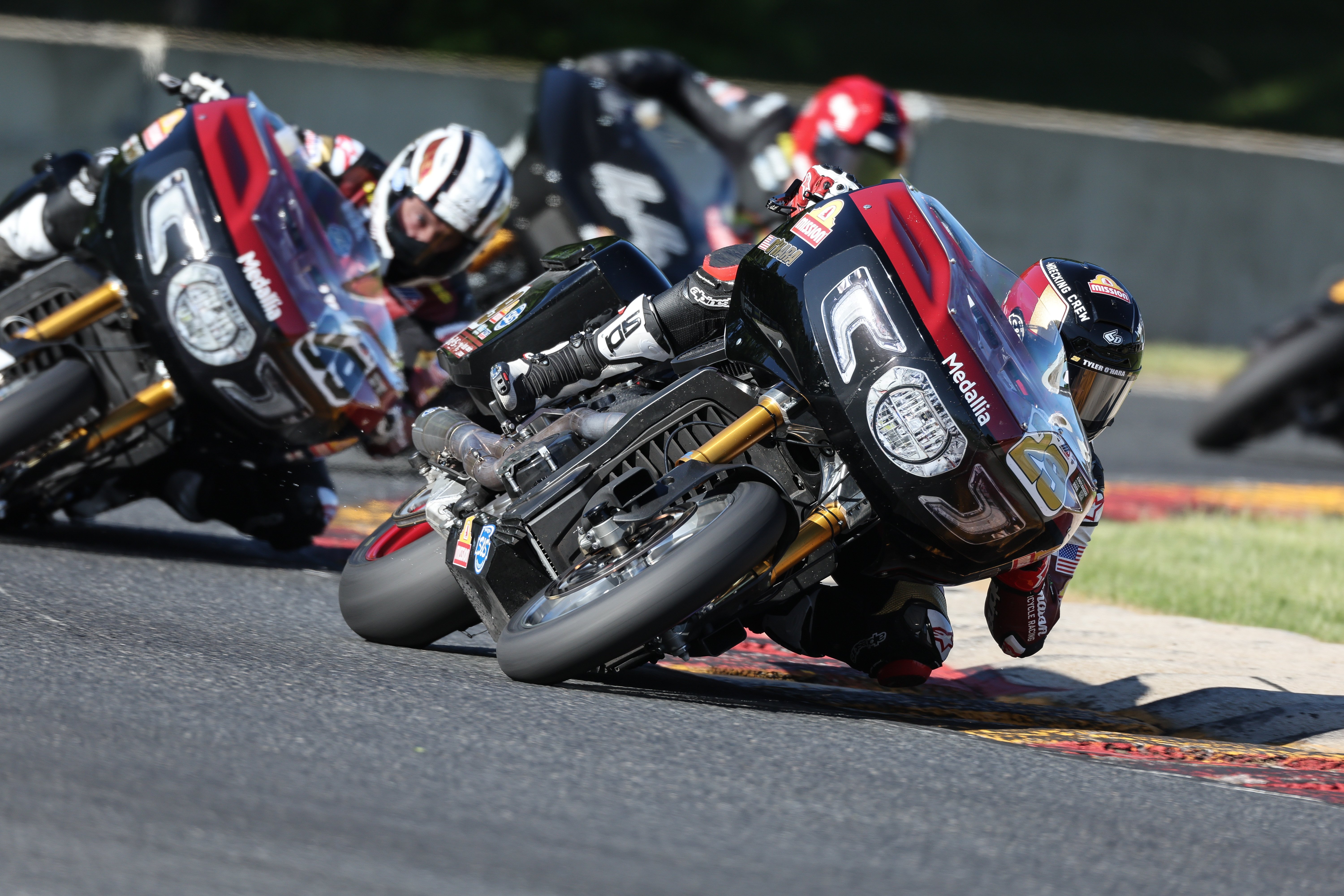 American Road Racing has a unique vibe, a very specific soundtrack, and until recently, a fairly purist approach to motorcycle competition. Across the last few decades, US-made V-Twins have come and gone from this upper echelon of two-wheeled racing, rarely drawing significant attention and generally fading away in favor of Japanese-made parallel two and four-cylinder machines spinning in excess of 15000 RPM. That was until recently, when MotoAmerica added the King of the Baggers class to their world-class racing program.

The purists were offended, the sound morphed into a thundering boom, and the crowds got, well, bigger. In fact, this past weekend's race at the storied Road America facility in Eastern Wisconsin set a new record for both fan and racer count!

First off, props to the MotoAmerica team. Led by the legendary Wayne Rainey and Chuck Aksland, their series is absolutely top-shelf. From the moment you enter one of these races, the experience is excellent. Signage, bathrooms, schedules, communication, and announcers are all very well sorted. Add that to the park-like setting of the 640-acre Road America Facility, and you can't help but have a good time.

Although the teams had already spent several days at the track testing, the program officially kicked off on Friday with practice and qualifying. To keep it interesting, the KOTB class was the biggest it had ever been. The competition was looking fierce, with times many seconds quicker than 2021 and multiple two-rider teams. The S&S-powered Indian Challengers ridden by Tyler O'Hara and Jeremy McWilliams looked good and ran up front the entire day. Our team was pretty happy with the results but knew we would have some work to do to beat a pair of very competitive factory Harleys. The weather report was also weighing heavy as Saturday and Sunday were definitely looking to be wet. The bagger class had never run in the rain, and we're not sure if anyone had ever even spooned a rain tire onto one of these beasts. 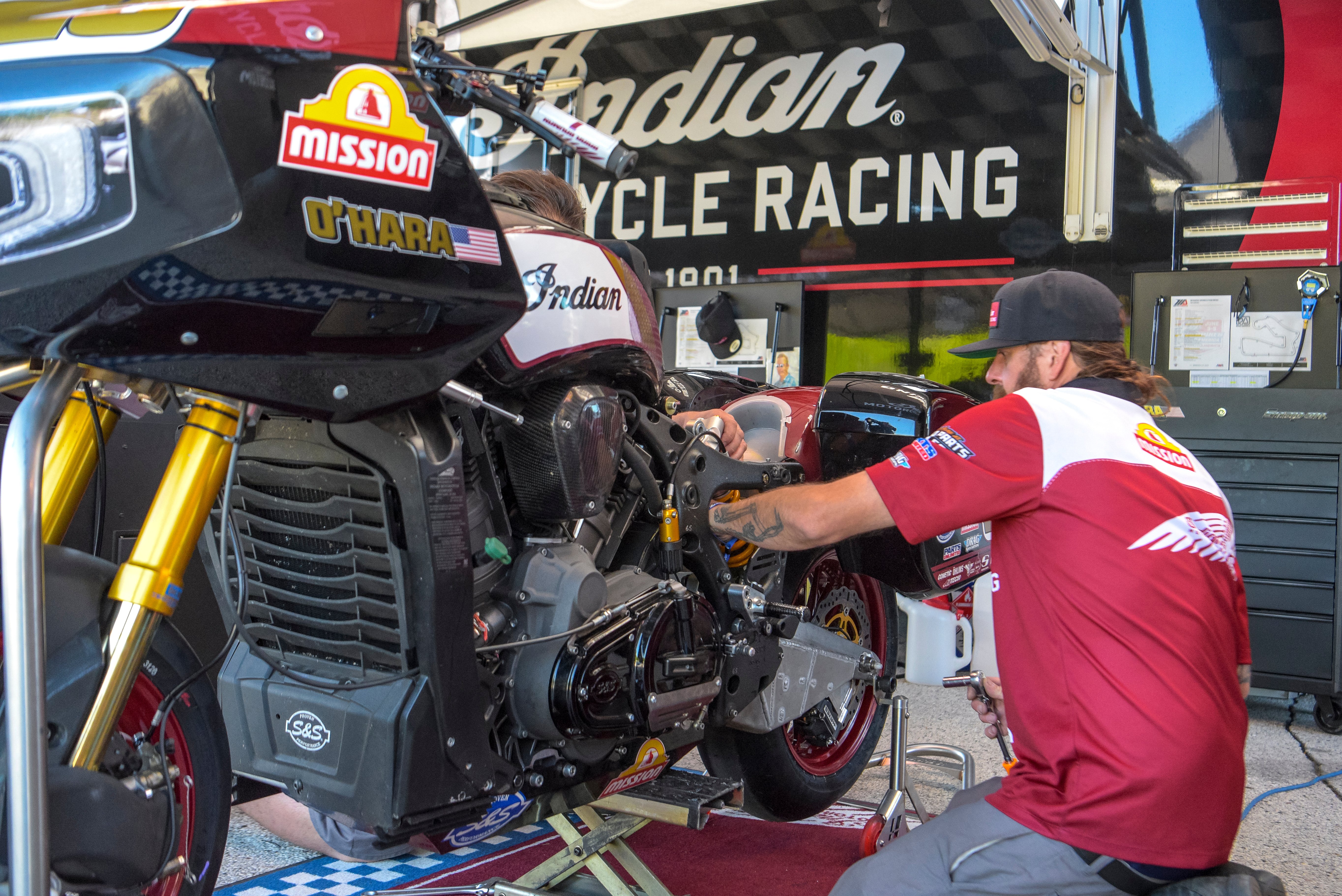 Saturday was a qualifier for the King of the Baggers class, followed immediately by the Mission Foods King of the Baggers Challenge. This two-lap dash for cash took the top six out of the qualifier, put them back on the track, and offered $5,000 for the winner. Needless to say, everyone in the facility could feel the desire to win emanating from each rider.

Off the line, our Indian Challengers moved straight to the front. Turn one saw McWilliams leading and Tyler close behind. Harley factory rider Kyle Wyman dipped into the bend only to discover McWilliams was already there. The two appeared to touch bikes before Wyman went veering off to the left. That put the #1 Harley at the back and seeing red. O'Hara stayed on the gas and fought off an attack in the last corner from the factory bike that nearly put both of them off the track. Tyler went on to win the drag race to the checkered flag and the $5,000. At this point, lap times were beating the supersport class and coming up on the 1000cc machines while many purists looked on with disapproving scowls. 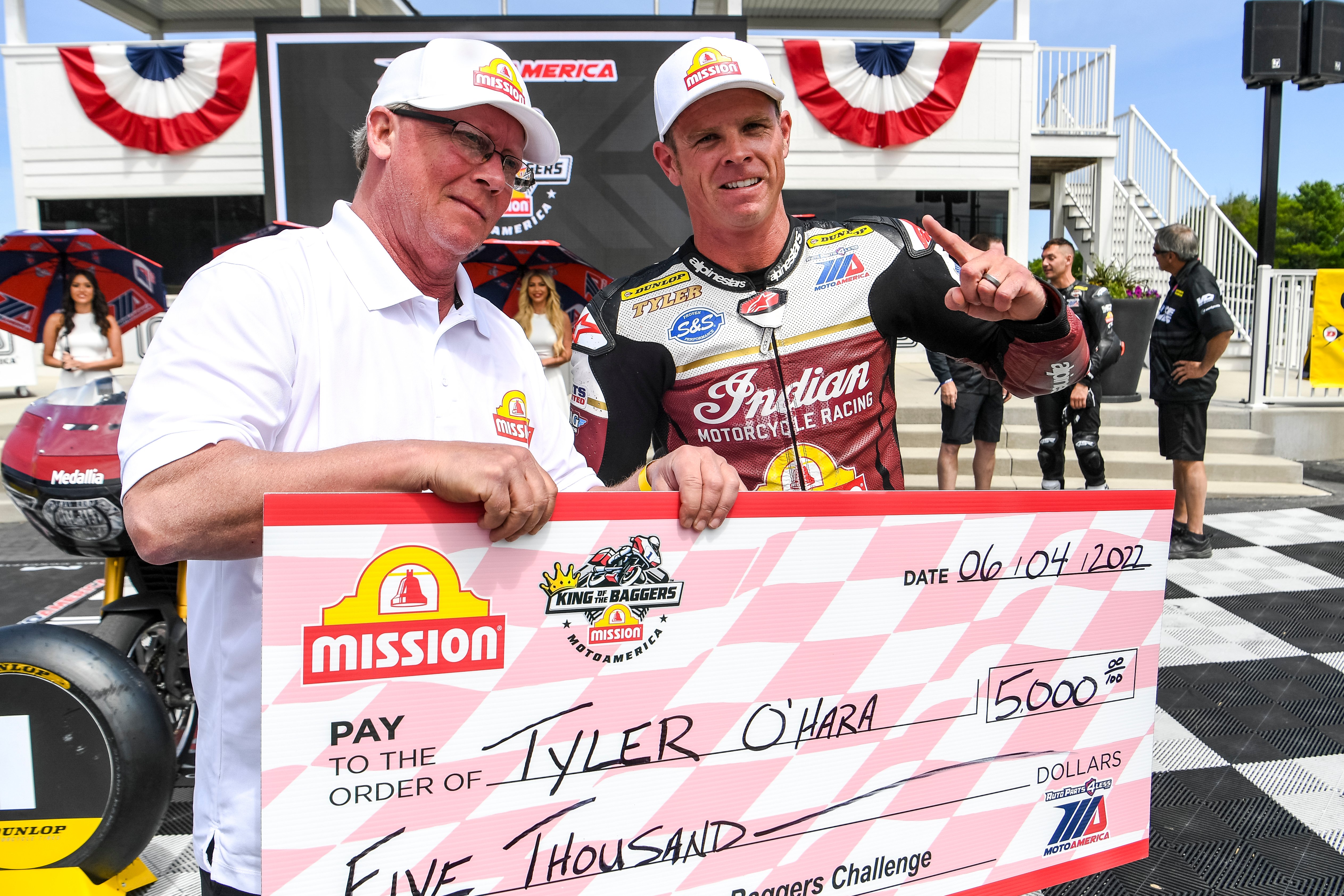 Sunday did nearly exactly what the weatherman had predicted, and we woke up to a very wet track. The bulk of the paddock was accustomed to racing in the rain and, while not thrilled, had long accepted this was part of racing. The KOTB crew, on the other hand, had never ridden these beasts outside of a dry track, and the teams quietly cursed the dark skies. Dunlop had supplied the best of their wet weather tires and was confident all would be well, so off we went.

The Baggers were on track before 9 am, which meant a cold track in addition to the rain. Our team held their collective breath. Well, except for our riders. They were nonplussed by the rain, particularly Jeremy McWilliams, who hails from Ireland and has spent a fair amount of his career in the damp. They both pulled out in front and led the warm-up by a significant margin until flags went out after Wyman and Barnes dropped oil on the track. McWilliams managed a 154 mph run in the rain, proving that baggers could indeed safely race in inclement weather. Now it was a waiting game as the track had to get cleaned up, and the forecast vacillated between rain and sun. It would be 4:00 on Sunday before we'd get back on the course, and by then, there was a dry line throughout the four miles of undulating pavement and barely a drop falling from the still cloudy sky. Would it rain? The teams were betting it would not, and while the promoter recommended rain tires, the riders all decided on slicks.

We heard one team was disqualified, and others were starting from the back, including Factory HDs Kyle Wyman. This is MotoAmerica's punishment for oiling down their track. The grid was now down to thirteen bikes, but these were the absolute fastest and most aggressive of the class and promised to bring the action despite the weather. 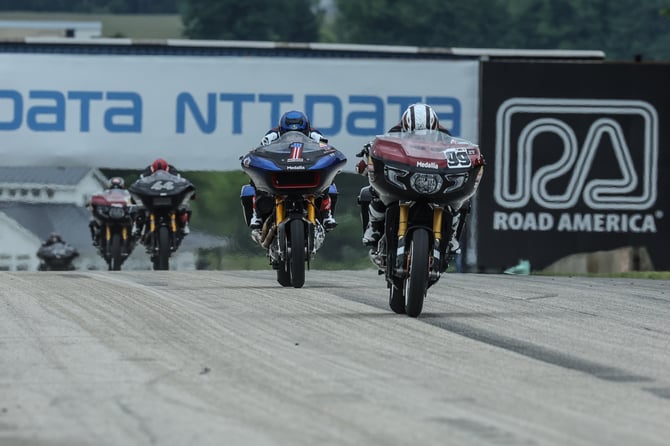 Off the start, our own Tyler O'Hara pulled out front and held it for the first of the four laps. The HD Factory boys were riding angry and diced back and forth with McWilliams in each of the track's fourteen corners.

Lap two had McWilliams putting his Indian Challenger up front. Still, both the Factory HD's were charging hard, and Kyle Wyman had worked his way up from the back. His brother Travis pulled in front in lap two and seemed to have found some extra power. The race was an abbreviated four lapper, so there would be little time to make big moves.

Both HD factory bikes had pulled ahead by the final lap, putting Jeremy and Tyler on P3 and P4, respectively, at the flag. Good for the points chase, but not likely where they wanted to be at the end of a very long weekend.

The rain stayed away for the main, both our guys kept it upright all weekend, and the bikes performed well. We learned these monsters are rideable in the rain and stayed in the points lead, so we'll call it a success. Up next is Laguna, Tyler's home track and the origin of bagger racing. We anticipate a full grid and likely the most competitive collection of bikes to date. Maybe a few angry purists as well. See you there! 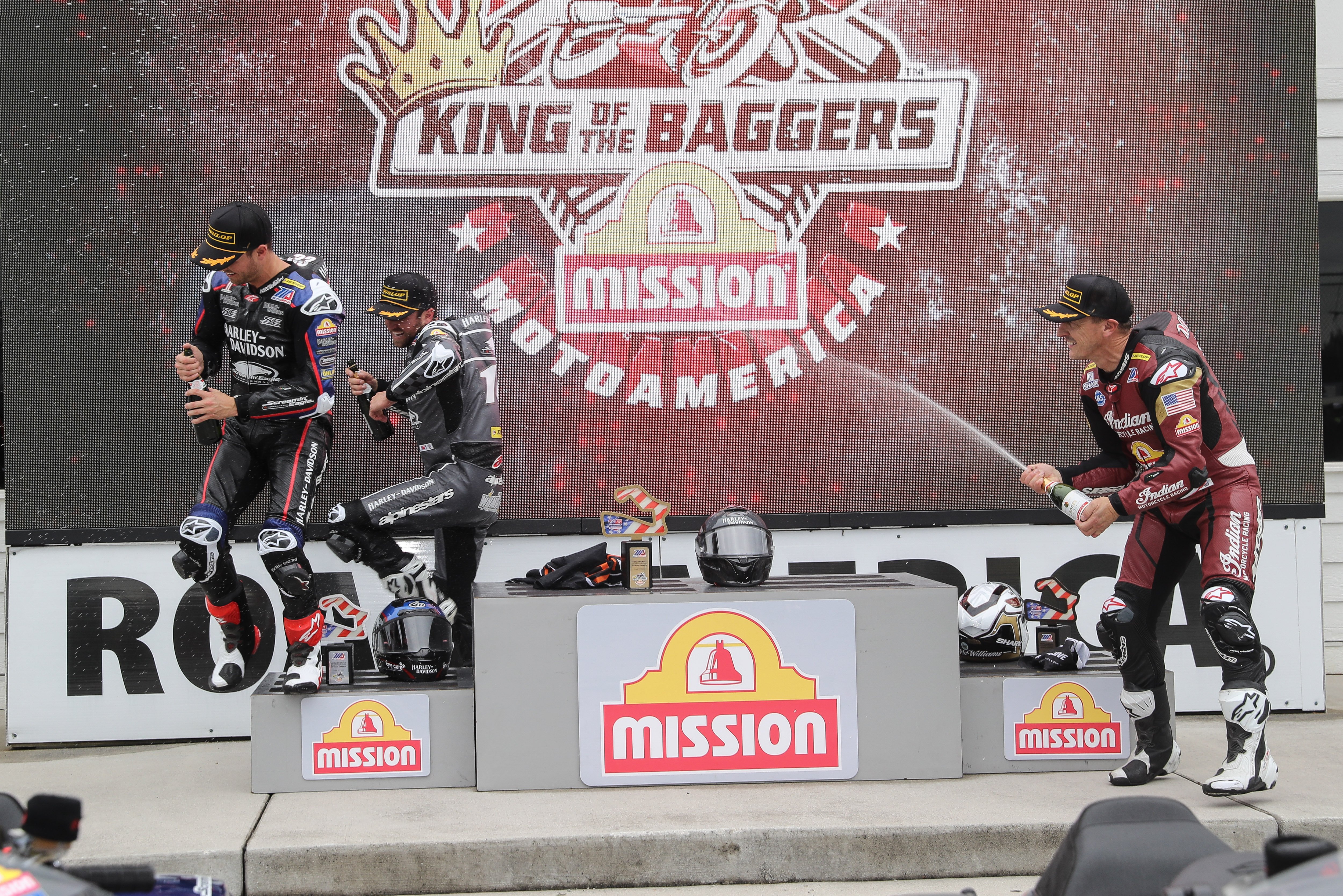 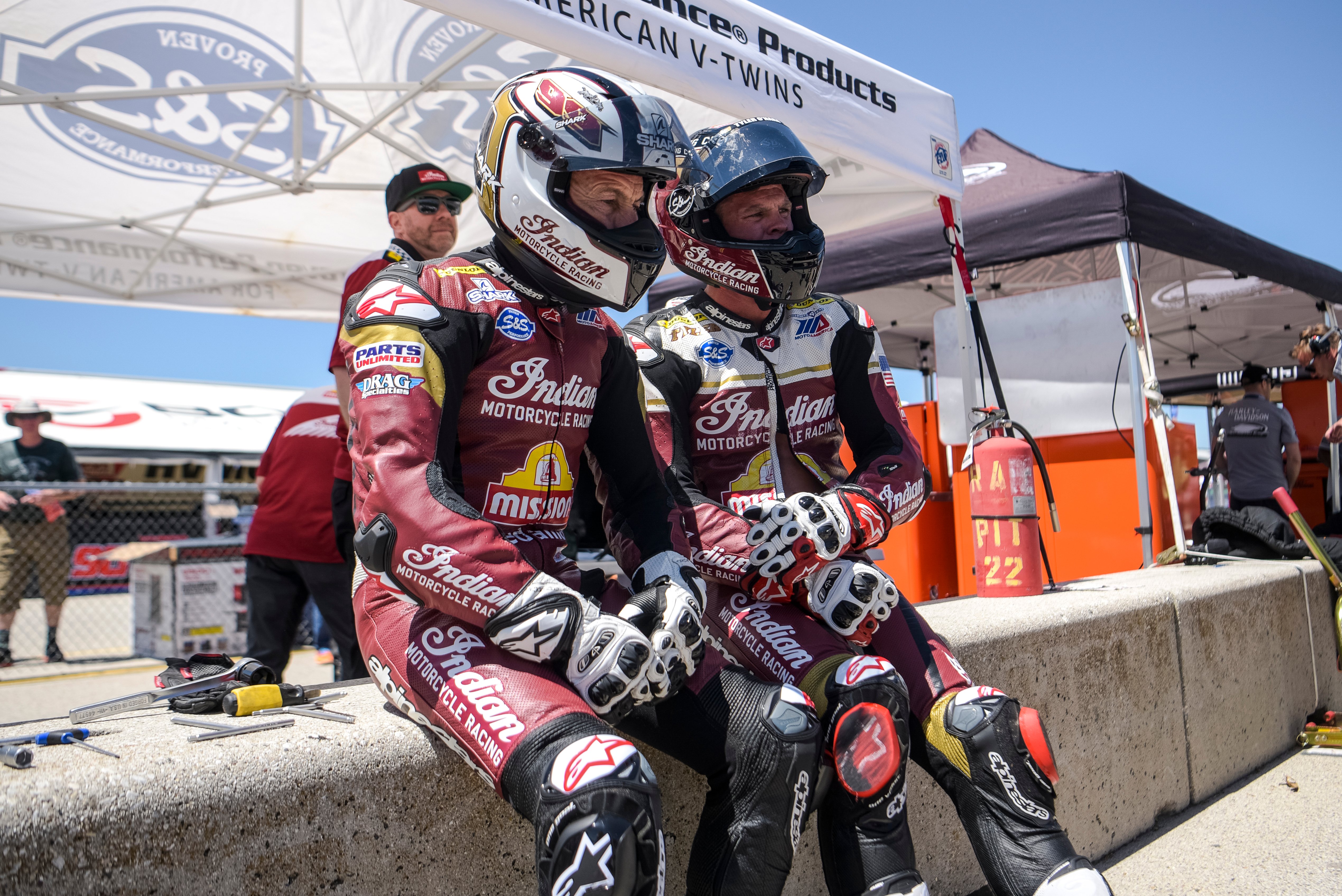