Brainerd International Raceway in Northern Minnesota is no stranger to top-level racing, with a drag strip, two road courses, and even a jet ski lake tucked into the facility. What is new to BIR this year was King of the Baggers, arguably the biggest, wildest, two-wheeled race series in recent history, and it delivered exactly that.

The MotoAmerica three-day race events typically take on a festival feel, with countless fans touring the track and adjacent campgrounds on bikes ranging from Kawi Triples to a JDM Motocompo. Booths, food trucks, and as of late, stunt shows help create something of a motorhead mecca all wrapped around some of the best motorcycle racing in the country. BIR’s program seems to run a little looser than other tracks and even dubs their open camping area “The Zoo.”

Friday activities are generally a practice round and a lot of setup activities. The S&S-powered Indian Challengers ridden by Tyler O’Hara and Jeremy McWilliams put down 1:37 and 1:38 lap times as they became accustomed to the track. 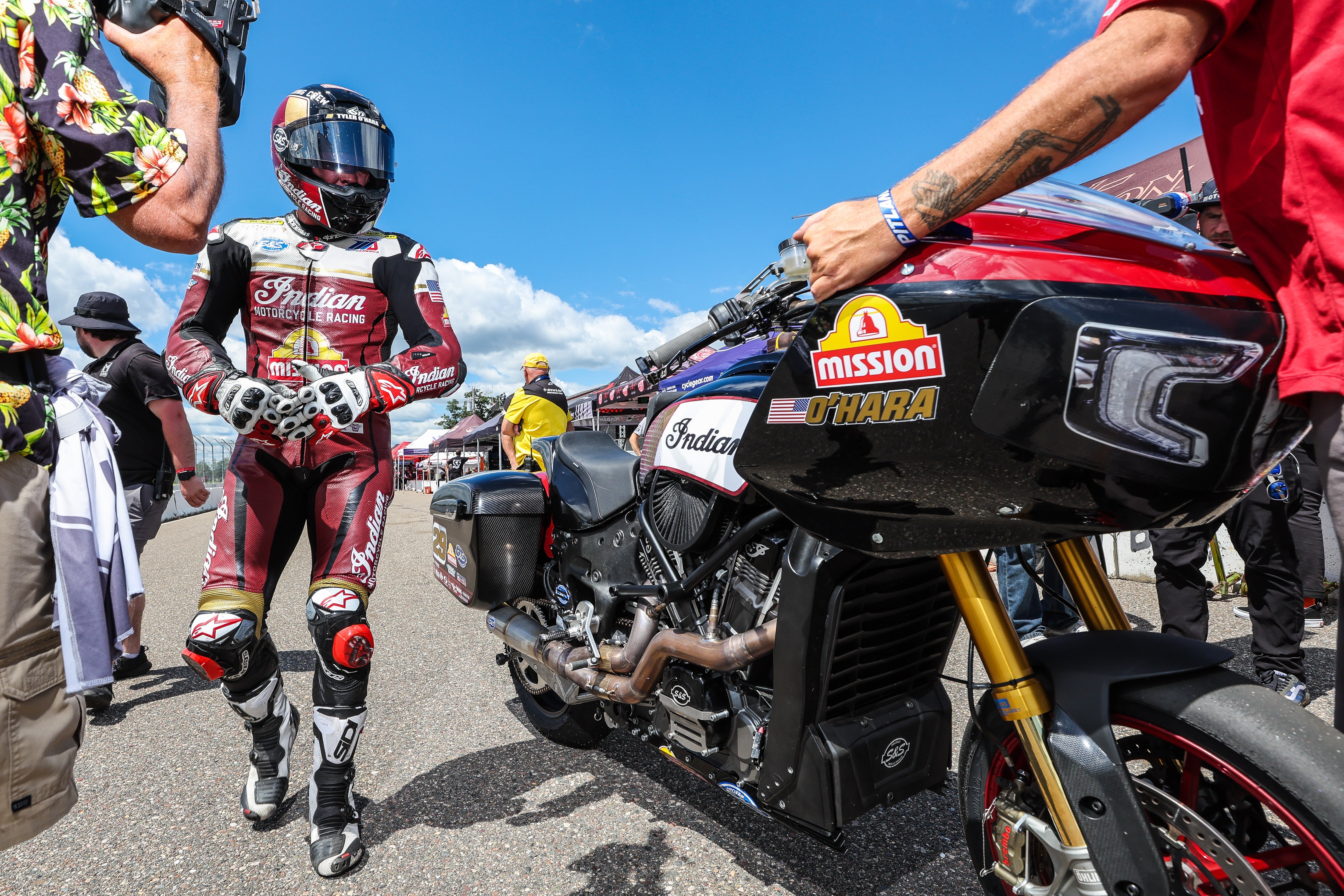 Saturday morning would see Tyler setting the fastest time in the class with a 1:35.792. To give you some perspective, that would have qualified him mid-pack in the Supersport class and towards the back of the fastest class in the series, the 1000cc Superbikes. Yes, a six-hundred-pound bagger would still have passed a few of the Superbikes!

The second qualifier later in the day had Tyler on top again with a low 1:35 as he appeared to push the chassis to its very limits. The factory Harleys were close behind, as was Indian mounted Bobby Fong.

Next up was the KOTB Dash for Cash, with the top 6 from the qualifier racing for $5,000 on the line. Tyler started on the pole, and he and Wyman battled for the first lap before O’Hara tucked a front wheel in turn 12 and put the bike on its lid. O’Hara popped right back up, but the machine came to a stop, fully inverted. Not realizing Tyler was no longer pushing for a pass, Wyman overcooked his bike a few corners later with similar results. That left Jeremy McWilliams in the lead, followed by Travis Wyman and Bobby Fong with only a lap left. The three stayed in tight formation until Fong made a series of seemingly impossible outside passes to put himself out front for the final win and the big check.

O’Hara would be on the pole for the main, and the team scrambled to get the bike put back together. At one point, it was just a backbone with forks. While we didn’t see it, we suspect that the Factory HD guys were doing the same. 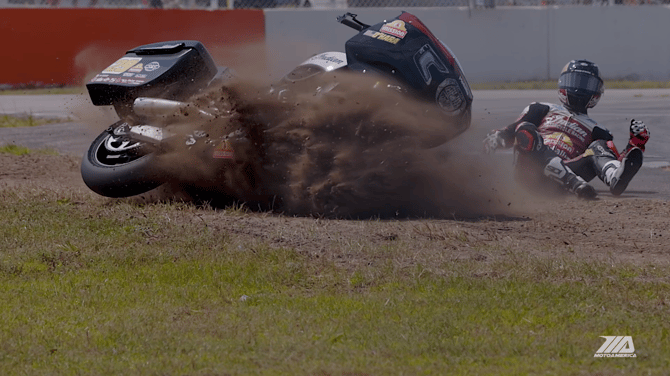 Above Photo Courtesy of SuperLex

Sunday morning we woke to a few brief showers, they did not last, but the facility was now wet enough to impact the already tight schedule. MotoAmerica immediately shared a status bulletin. Damp track be damned, the baggers would be heading out for the 9:00 am warmup.

None of them did. Well, except for our own Jeremy McWilliams, whose extensive race history in wet conditions puts him in a unique position in a dry-focused US racing series. Jeremy ran the clock out, pushing the bike and gauging reaction on a wet track. He even came in at one point, the team was relieved he had stayed upright until he told them he wanted a change in a suspension setting so he could go back out. The crowd went nuts! 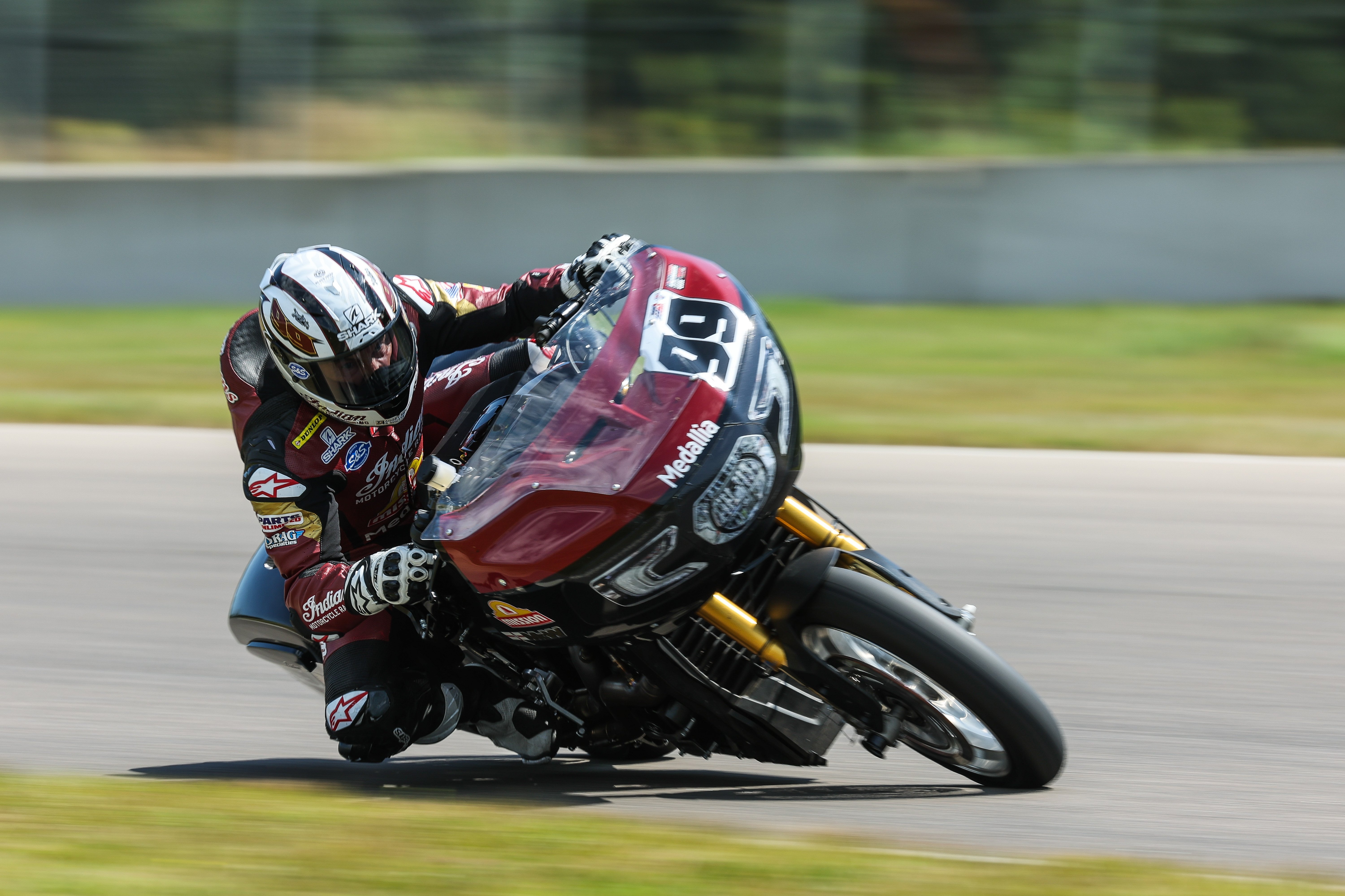 Will baggers ever run in the rain? We suspect they will, and McWilliams will now be leaps and bounds ahead of the grid.

The day progressed with no more showers in sight, and the track eventually dried out enough for the rest of the class to feel confident in getting out there. With a solid grid, the baggers roared off the line. O’Hara, on pole, had the advantage and kept it. Bobby Fong made an aggressive move to stay towards the front, and the pack pulled hard through the first few corners. With a fourth-row start, Patricia Fernandez had moved up a few bikes only to hit oil on the track, go down and cartwheel the bike. She bounced right up, but the race was now red-flagged, and her day was over.

The oil turned out to be pouring from Kyle Wymans factory Harley, although not clear from where on the bike. This would be the second race his machine has polluted the track; in Road America, he started at the back of the pack, and this time would be DQ’d. In the chaos, the KOTB class was unexplainably pushed to the end of the day, which would put it right up against an incoming rain storm, and the 9-lap main was now reduced to 5. Not a great outcome.

The main would still see a ten-rider grid and a very clean start, but that would not last as the V&H-powered HD ridden by Taylor Knapp began billowing smoke. An already nervous grid tried to signal him down, but it took a black flag to get him off the track. With Rispolli already on the sidelines from a crash, that would put both V&H bikes on the trailer. We suspect they’ll be back to fight in the next race. 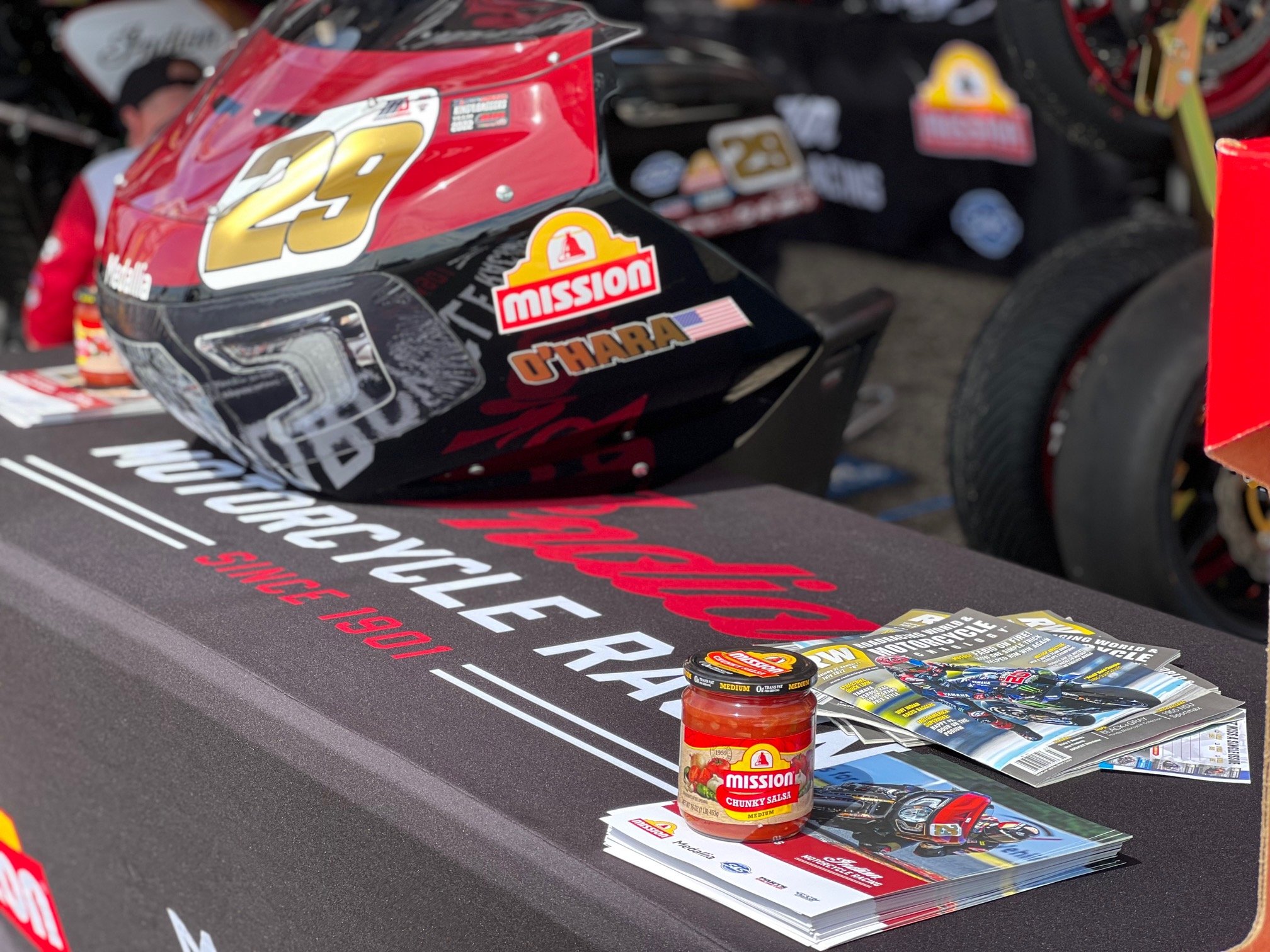 Lots of action and we are barely one lap in! Tyler, Wyman, Fong, and McWilliams rode up front, pulling away from the pack as the looming clouds threw out a few warning sprinkles. Bobby Fong, now running an S&S-built engine, was on fire (figuratively) and clearly willing to hang it out. By the second lap Tyler was out in front, but Fong had gotten around Wyman on an outside pass and was showing Tyler a wheel.

Rain droplets were now evident, but that did not seem to slow down the top three. In a daring slingshot move, Fong got around O’Hara on his Indian Challenger and took Wyman with him.  The three were still running wheel to wheel, barely into lap three when a red flag came out and shut it down. We assumed it was a crash, but it soon became clear the race was flagged for rain. Yet another unfortunate outcome in a day that felt like it was full of them. There is still one more race left in the series and only three points separating Wyman and O’Hara. See you in Millville at the New Jersey Motorsports Park for the King of the Baggers Throwdown!