S&S Cycle was built on racing. Back in 1958, company founder George J. Smith already had years of racing experience, with drag racing championships and a Bonneville land speed record to his credit. So it isn’t too surprising that S&S still supports a number of racing efforts around the world to this day.

There are a number of ways S&S supports racing. One, of course is to manufacture superior quality Proven Performance® products that help win races and set records. The other ways are more financial in nature and can take the form of sponsorships or contingency prizes. In the NHRA, S&S pays out contingency prizes in the Pro Stock Motorcycle class.
A product contingency is a pat on the back (and in the wallet) for racers who use S&S parts to win races. S&S racing manager Justin Bramstedt puts it this way. “We get tons of requests for sponsorship. Way more than we could possibly honor. So rather than pay out to all comers ahead of time, we prefer to reward the guys who are making it happen using our parts.” Justin went on to comment about last year’s season. “S&S billet Pro Stock engines dominated the field last season, what with Matt Smith taking first place, and seven of the top ten bikes powered by S&S. We paid out over $27,000 in contingencies.”

The requirements for S&S contingency prizes are pretty simple: take first or second place in the Pro Stock Motorcycle class at an NHRA event on a bike with “S&S supplied engine cases”. As you would expect the first place prize is more than the prize for a runner up, but it takes a lot to achieve either placement in this fiercely competitive class.

S&S Cycle does do some limited sponsorship for other types of racing and other sanctions. Bonneville land speed racing is a good example, but that’s a subject for another story. The point here is that S&S continues to support racing. It’s what we do!

The 2014 NHRA Pro Stock Motorcycle series kicks off with the Amalie Oil Gatornationals in Gainesville, FL, with the competition in the class looking to be as tight as it ever has.
The NHRA further tweaked the rules in the off-season to gain even greater parity between makes. The new rule is a benefit to the Suzuki bikes, allowing them to increase their displacement from 107 cubic inches to 113 c.i. The rule change is welcome as the Suzukis looked to be at a disadvantage, with only one Suzuki rider, former champ LE Tonglet, placing in the top ten in 2013.
Prior to the 2013 season the NHRA announced a major rule change, leveling the playing field for all V-Twin bikes.

In 2012, Harley-Davidsons dominated the season. A lopsided rule allowed H-D V-twins to have 4-valve, overhead cam cylinder heads while S&S motors were kept to pushrod-initiated 2-valve cylinder heads. The Harley team of Eddie Krawiec and Andrew Hines won all but one event in 2012, with Krawiec earning his third NHRA Championship.
The rules were adjusted between the 2012 and 2013 seasons. Now all V-twin motors are mandated to have 2-valve, pushrod valve train configurations. The pushrod length was also set to a minimum of 8 inches.
The S&S racers responded, winning 13 of the 16 events with Matt Smith hoisting the coveted “Big Wally” championship trophy for the second time in his career.

The 2013 season started with a three-race win streak by second-generation racer Hector Arana Jr. Through Indy, where the playoff “Countdown” is finalized, five different racers took event wins. Smith staged a stunning, late-season surge that allowed him to clinch the championship in Las Vegas with one race to be contested.
The S&S-powered Buells led the performance charge all the way. Of the 16 number one qualifiers, 15 were riding S&S power. Buell riders accounted for eight of the top 10 ranked riders. 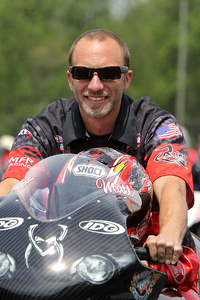 Matt Smith is the renaissance man of Pro Stock Motorcycle racing. He builds his own bikes and motors, tunes and rides, all while overseeing and managing a 3-bike team he owns. He can perform every aspect of running a Pro Stock Motorcycle and does it all with astonishing success.
Smith, the 2007 series champ, looked strong at the opening event of 2013, taking the pole at Gainesville with a 6.804 elapsed time – a performance that would remain the quick lap for the class until the end of September.
But while Smith always came with a competitive bike, an intermittent transmission problem would repeatedly take him out of competition in the early part of the season.
Mid-season he rectified his issues. In the five-race swing between Chicago and Indy he went to four final rounds and took his first win of the season at Norwalk. He entered the playoff “Countdown” in the second spot behind Hector Arana Jr.
Smith yielded no ground to Arana Jr. in the first two races of the Countdown and then went on a tear – winning three straight at St Louis, Reading, PA, and Las Vegas to earn his second championship.
Smith’s championship was especially sweet for Smith as his father, Rickie Smith, won the NHRA Pro Mod championship, making them the first father and son duo to win NHRA national championships in the same season.

Michael Ray, one of the rising stars of the series, broke up the possible undefeated 2012 season by the Harley-Davidson team by winning the Dallas event on the Viper Motorcycle Buell of Matt Smith Racing. Ray switched teams before the 2013 season and signed on with the Sovereign/Star Racing team owned by George Bryce.
Ray, who has won championships in the S&S Challenge and V-Rod Destroyer classes in AHDRA competition, continued his winning ways on the NHRA tour in 2013, making the winners circle at both Englishtown and Chicago. He also qualified in the number one position at Epping, Norwalk and Reading.

2011 NHRA Rookie of the Year Hector Arana Jr. charged out of the gate in 2013, winning the first three races of the season to earn a commanding points lead and become the early-season favorite to win the championship.
Arana Jr. would not win another event until Sonoma but went into the Countdown with his points lead intact. He struggled in the final four events of the year, failing to advance out the second round of eliminations at each race, despite qualifying on the pole in Pomona. The late-season slide dropped him from first to fourth in the points.

No. 5 Hector Arana – Lucas Oil Buell
Hector Arana is one of the most popular riders on NHRA tour. His two sons, Hector Jr. and Adam, are now competitive racers in the series.
Arana is also one of the true veterans of the class, racing in the NHRA Pro Stock Motorcycle series since 1990. He is the 2009 series champion.
Arana has not won an event since his championship season but held performance marks in 2013. His 6.796 elapsed time at St Louis was the quickest run of the season for the class. He also ran 198 mph which was the fastest ever recorded for an S&S-powered motorcycle in NHRA competition.

No. 6 Scotty Pollacheck – Viper Motorcycle Buell
Second year rider Scotty Pollacheck made headlines in 2013 when he left the Star Racing team in the middle of the championship playoff Countdown to finish the season with Viper sponsorship on the MSR team.

Pollacheck actually paid for his seat on the Star Racing team and cited personal, irreconcilable differences with team owner George Bryce as the reason for his departure.
While with Star Racing, Pollacheck made the final at three events. He joined the Viper Motorcycle team in St Louis where he made the semifinal. He again made the final at Pomona, improving on his seventh place finish in 2012.

2013 was a breakout year for John Hall, the former standout in the AMA Dragbike SuperSport sportbike drag racing class. Hall switched teams for his sophomore season of NHRA PSM competition, moving from the Star Racing camp to the Viper Motorcycle team of Matt Smith Racing.
Hall scored his first NHRA win at Epping, New Hampshire, at the inaugural New England Nationals and then took the biggest race of them all – the US Nationals at Indy. Coming out of the 15th qualifying position at Indy, Hall took out former champions Eddie Krawiec and LE Tonglet before beating team owner Matt Smith in the final.

His youthful demeanor hides the fact that Shawn Gann is one of the veterans of the Pro Stock Motorcycle class, racing in NHRA competition since 2000. His father Blake prepares the bike and is well regarded in the community, producing state-of-the-art components for drag bikes.
Gann won his first race in nine years in 2013, taking the win in the tricky, high-altitude air of Bandimere Raceway in Morrison, Colorado where he beat Hector Arana, Jr. in the final round.

Rookie Racer Adam Arana joined his brother and father on the Lucas Oil team – one of the most formidable teams in NHRA Pro Stock Motorcycle racing. Adam had an admirable rookie season, going to the final in Epping, NH and being the top qualifier in Denver.
His placement in the Countdown and his top 10 finish is impressive considering that veterans like Andrew Hines and Steve Johnson did not make the cut.