Matt Smith’s third straight win was one of the biggest of his career as it allowed him to cinch his second NHRA Pro Stock Motorcycle championship.  Smith rode his Viper Motorcycle S&S-powered Buell to the win at The Strip at Las Vegas Motor Speedway and in doing so locked up the 2013 Mello Yello championship with one race remaining on the schedule.  Smith beat the Suzuki Jerry Savoie in the final round.  Smith became only the seventh rider in NHRA history to win multiple Pro Stock Motorcycle championships. 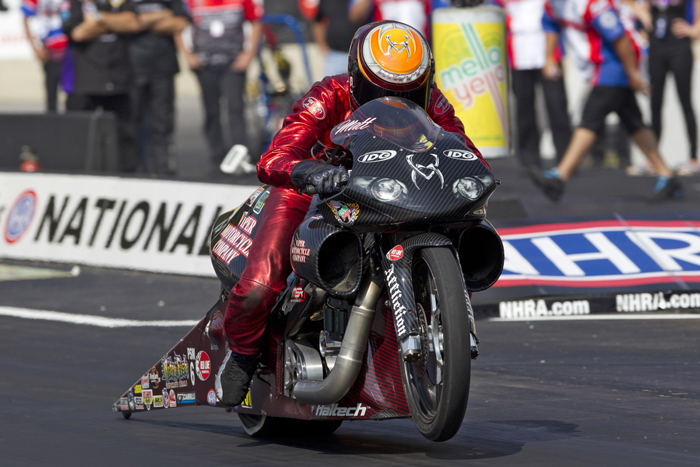 Smith has had a fast bike for most of the year but he got hot at just the right time.  Since the championship “Countdown” has started in Charlotte, he has been to four finals and qualified no worse that 4th. This, as his major competition has stumbled down the stretch.

“I don’t want to sound too confident, but we’ve almost been unstoppable,” said Smith. “We’ve been to 10 finals since Epping and have six wins. Those are amazing numbers for our team.”

Smith came into Vegas with a 125-point lead over the rest of the field.  That equated to over six eliminations rounds of competition with only eight rounds left to race over the final two races.  Going to the winner’s circle by winning the four rounds at Vegas, Smith now has a 165-point lead over the next ranked rider, former teammate Michael Ray on the Sovereign/Star Racing Buell. With a maximum 150 points available at any event including qualifying bonus points and national record points, it is mathematically impossible for any racer to catch Smith.

Hector Arana led qualifying at Vegas on his Lucas Oil Buell with a final session 6.930 second elapsed time to move the Suzuki of Steve Johnson down to the second spot.  Following Johnson were the Buells of Adam Arana, Smith, Hector Arana Jr. and Michael Ray.  Savoie was seventh on his White Alligator Racing Suzuki.

Smith got by former champions Andrew Hines and LE Tonglet before taking out Shawn Gann in the semifinals to make his eighth final of the year.  Savoie beat Michael Ray in the semifinals, which essentially created the opportunity for Smith to lock up the championship.  Smith took full advantage, getting the holeshot over Savoie and pulling away, 6.99 to 7.05 for this fourth win of the season.

The championship is the third for S&S-powered machines in NHRA competition.  Smith brought S&S it’s first championship in 2007 and Hector Arana won the big trophy in 2009 on his Lucas Oil Buell. In the last seven years S&S-powered bikes have won as many championships as the once-dominant Harley-Davidson® motorcycles.

The 2013 NHRA season concludes at the Auto Club Nationals in Pomona, CA, November 7-10.