Matt Smith took his second win in a row on the Viper Motorcycle S&S® powered Buell to extend his points lead in the NHRA Mello Yello Pro Stock Motorcycle championship battle.  Smith took out the resurgent Harley-Davidson® of defending series champ Eddie Krawiec at the Auto Plus NHRA Nationals at Maple Grove Raceway near Reading, PA. 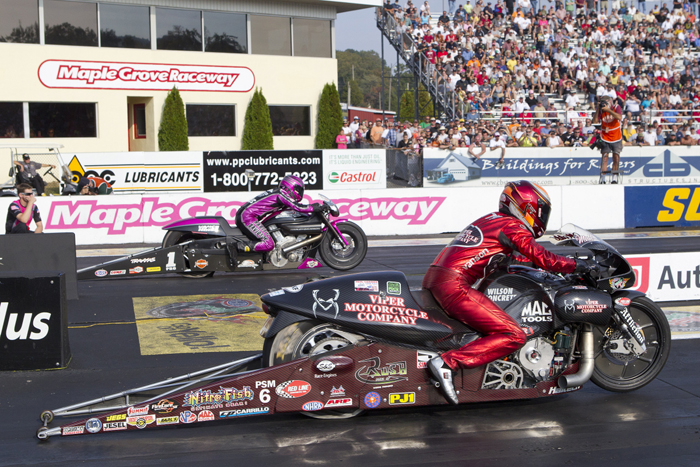 “It was a pretty good day for the Viper Motorsports team,” said Smith.  “We hurt the motor in the last qualifier and were up all night making repairs.  It feels good when the work pays off.”

Michael Ray took his third number one qualifying performance of the year with a 6.857 elapsed time at 193 mph on the Sovereign/Star Racing Buell.  S&S power accounted for the top six qualifying positions and nine bikes in the short field of 15.

Smith caught a major break in round one of eliminations when first time NHRA PSM rider Chaz Kennedy - who was making his NHRA debut on the #2 Sovereign/Star Racing Buell left open when Scotty Pollacheck moved to the Viper Motorsports team - red lit in round one.  Smith had a -.009 reaction time but Kennedy was worse at -.010 and turned on the red light, giving Smith the win.

“We got lucky and they say you have to get lucky for one round,” said Smith.  “We had a pressure leak which meant I couldn’t play the games I usually do.  I had to get in the [staging] beams fast. I rolled in a little too deep.”

In round two, Smith got by teammate John Hall.  The same round saw two of the top contenders for the points, Hector Arana Jr. and Hector Arana Sr., also go out.

The loss marked a tremendous fall for Arana Jr. who stared the season with a three-race with streak.  He led the points all the way until his first-round loss at St. Louis the previous week.

The semifinals at Maple Grove saw an epic face-off between Smith and Michael Ray.  Ray ran the quick lap of eliminations in round one at 6.88 seconds but slowed to a 7.00 against Smith, who turned in a 6.99 to make the final.

The final saw Smith cut a devastating .004 reaction time against Krawiec who was appearing in his second final in the last three races. Smith pulled away for the win, 6.93 to 6.96.

It is said that champions get hot as the season playoffs get started.  That is exactly what is happening with Smith.  In the last six races he has made five finals, two wins and two number one qualifying performances.

His lead is now 125 points over Arana Jr.  That equates to over six elimination rounds with only eight rounds of competition to go over the final two races of the season.  The tight pack following Smith - Arana Jr., Ray and Arana Sr. - are separated by just four points.  Krawiec is 145 points back.

Even with an almost insurmountable points lead, Smith has no plans on letting up.

“It’s not over until they give you the trophy, the big check and the jacket,” he said.  “Right now we just look at every round as 20 points and that is 20 points we need for the championship. We are going to work as hard as we ever have.”

The NHRA Countdown to the Championship resumes in Las Vegas Oct 24-27.