What's With The Red Hat?

We've gotten a number of emails asking what the red hat is all about.  Odd that nobody has commented about it on the blog.  Be that as it may, here's the deal. 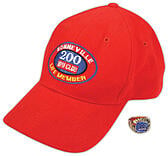 The red hat that Jay and Wink were striving for is not the one your mother in law wears with her purple pants suit to her Red Hat Society meetings.  The only people who get to wear this hat belong to the prestigious 200 MPH Club.  The 200 MPH Club is a very exclusive organization open only to people who have set a record of over 200 MPH in any of a number of land speed racing sanctions. Check out their website for more details.

So all Wink and Jay need to do is to beat their current records and go over 200 mph to get in the club, right?

How can Jay Allen hold an SCTA record in APS-PF 3000 if Dave Campos holds a higher one?  The answer is that it's complicated; involving several different racing sanctions and 200 MPH Club rules.  When the smoke clears, it's tough to fight city hall, and if you want to join the club, you have to play by their rules!

What do all the numbers and letters in the class names mean?

The number is the maximum displacement in cubic centimeters.  The first A stands for Altered or special construction.  The PS stands for Partially Streamlined.  The PG stands for Pushrod Gasoline, and the PF stands of Pushrod Fuel.  So APS-PF3000 means that the bike is altered, partially streamlined, with a pushrod engine of less than 3000cc displacement, and running on fuel (nitromethane). So why are these guys going after a fuel record on a bike that's powered by gasoline?  Well, there's no rule that says that you have to run nitro, it just says that you can.  So if you can beat a fuel record on gas, more power to you.  It's been done before.

Meanwhile back at Wink's shop in Orange, CA . . . Wink is modifying the new bodywork to fit Jay's FXR.  The problem is that this fairing was built for a different type of motorcycle.  When you stick it on a Harley-Davidson® big twin the cutout for the riders left foot is right over the big hump in the Harley® primary case.  The solution is to move the cutout back about eight inches so the rider's foot can slide in behind the primary and out of the air stream.  That's a time consuming bit of fiberglass work, but it has to be done.

The aerodynamics of the bodywork is critical to the success of this project.  In fact it's just as important as the additional horsepower.  Keep in mind that the salt at Bonneville does not offer exceptional traction, so it's not that hard to make the tire slip and spin.  Also, at speeds of over 200 mph wind resistance becomes a major factor.  At some point wind resistance will overcome the traction available, and the tire will start to slip.  The easier the bike can slide through the air the higher the speed at which that will occur.  That's what it's going to take to get that red hat!

Haste Makes Waste... And Who Wanted To Get Wasted? 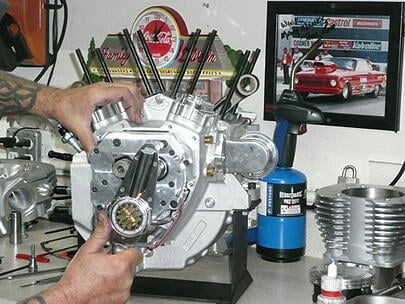 A couple of days ago Wink contacted us here at S&S to tell us that they weren't going to make it to the World Finals at Bonneville, and now it looks like the meet may not happen due to rain.  The reason Wink and Jay decided to give it a miss was that there was just too much to get done and not enough time to do it right.  In addition to the fiberglass bodywork, one of the key problems was that the engine hadn't been given the Wink Eller treatment, and he needed to go through it to make sure everything was perfect.  According to Wink "You have to be prepared, and everything has to be done right when you go to Bonneville."  He went on to explain that just going 200 mph is dangerous enough, and that rushing to get ready and possibly making mistakes or cutting corners increases the danger unnecessarily.  "Besides, if you work 24/7 to get ready the week before the race, you show up at the salt all worn out.  That's no good!  And I hate workin' on my bike out on the salt!"

These guys are no quitters, so what's the plan?  The plan is that they will skip the World Finals at Bonneville, but will instead focus on a November race at El Mirage in southern California.  That will give them more time to prepare the bike and get everything dialed in before the race.  We intend to update this blog to follow Wink and Jay's progress, so check back to the S&S Performance Times Blog often to see what happens.