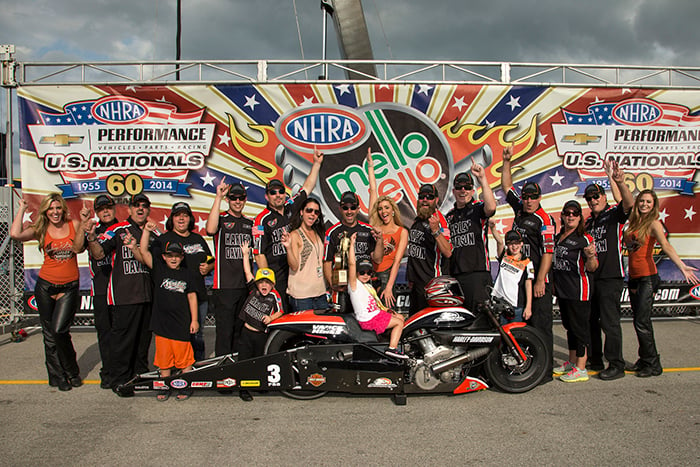 Eddie Krawiec took out the Suzuki of Jerry Savoie for the second race in a row as the Countdown to the Championship field was set at the NHRA Chevy Performance US Nationals in Indianapolis.

The US Nationals, held every year in Indy over Labor Day weekend, is the most prestigious event on the NHRA Mello Yello championship tour.  It is also the last event racers have to place themselves in the Countdown playoff. This year was the 60th running of the event.

Krawiec and Savoie knocked each other out of the top spot as qualifying progressed.  Krawiec led on Friday with a 6.930 elapsed time.  Savoie led after Saturday’s runs with a 6.878 but Krawiec came back on Sunday and took the pole with a 6.829 at 196.56 mph. 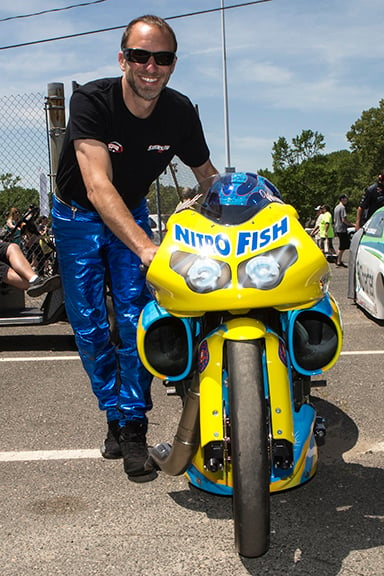 S&S powered Buells were well-represented in the field, holding the next five positions led by Matt Smith at 6.888, Michael Ray with a 6.890 and Hector Arana Jr. at 6.906.  In all, there were 10 S&S powered Buells in the qualified field of 16 bikes.

The race was run under the constant threat of rain and Monday’s eliminations were no exception.  And while rain never became a factor, the race was held under grey skies and in humid air.

Hector Arana Jr. came out swinging, setting the low elapsed time of the first round with a 6.896 time slip.  Krawiec set the pace with a 6.986 in round two which saw a couple of teams facing each other: Matt Smith took out wife Angie and Krawiec beat teammate Andrew Hines.

The semifinals perfectly represented the elite of the class: Krawiec from Harley-Davidson; Matt Smith from the MSR team on his Buell; Hector Arana Jr. representing his family’s team on his Buell and Savoie, currently the quickest Suzuki in the class.

The final had even bigger implications for Savoie, as he needed to win the event to make it into the Countdown.

Having redlit to Krawiec in the Sonoma final, Savoie went easy on the tree and the result was a disastrous, .143 reaction time.  Krawiec had a solid .026 light and took the win with a 6.941 to Savoie’s 6.987. Savoie missed the Countdown by 3 points.

The win was special for Krawiec.  The three-time champ has won everything there is to win in the class but has never won Indy.

“It’s so awesome to get a win here at Indy,” said Krawiec, who now has 25 career wins “There’s so much tradition at this race, a win here is sort of on a different level. My professional goals have always been to get a win at my home track in Englishtown, to win the championship, and to get a win at Indy. Now I’ve done all three.”

The Countdown format takes the top 10 riders and tightens up the points between them to ensure anyone in the Countdown has a legitimate shot at earning the championship.  The number 10 rider is reset to 2000 points, effectively eliminating any rider not in the top 10. Each place up from the tenth position is given an addition 10 points, half of the value of an elimination round win of 20 points.  The top rider is given a 30-point advantage.

The field for the Countdown is as follows:

Most impressive on the list is that the Matt Smith Racing camp has all four of it’s S&S powered Buells in the top 10: Matt Smith, his wife Angie, John Hall and Scotty Pollacheck.  Of note is that both Hall and Pollacheck announced sponsorship extensions throughout the season, Hall with Nitro Fish and Pollacheck with Petrohead Apparel.  It can be said that MSR accounts for 40% of the Countdown field.

The Countdown to the Championship kicks off with the Carolina Nationals at zMAX Dragway near Charlotte, NC, September 12-14 and continues for four consecutive weeks including stops in Dallas, St Louis and Maple Grove, PA.