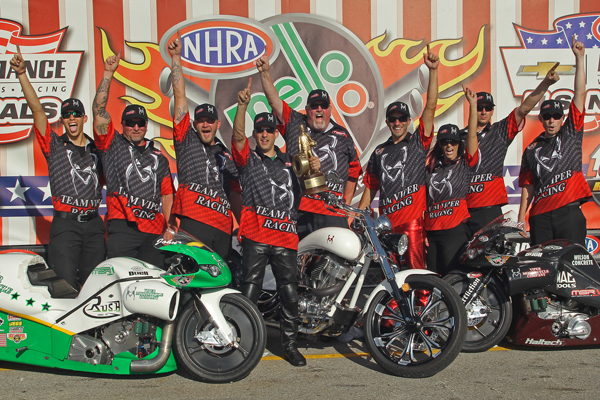 John Hall took his second NHRA Pro Stock Motorcycle event win of his career in stunning fashion: coming from the 15th position to beat three former champs including his teammate, crew chief and team owner Matt Smith in the final at the biggest drag race of them all, the Chevrolet Performance US Nationals at Indy.

“This team gives me the opportunity to win,” said Hall. “I never thought I would get a Wally. To have two in one season and to win Indy is something special.”

Hector Arana looked like he had the hot bike at Indy, qualifying his Lucas Oil Buell on the pole with a 6.938 elapsed time at 193.88 mph.

S&S powered Buells have dominated qualifying this year but at Indy other makes challenged the stranglehold with Eddie Krawiec (H-D) and LE Tonglet (Suzuki) claiming the number 2 and 3 spots. Still, S&S-powered bikes accounted for over half  (ten) of the 16 qualified entries.

Hall put himself in a difficult spot.  Qualifying in the back of the pack with a 7.022, he would have to face defending series champ Krawiec in round one.

“I was responsible for my poor qualifying performance,” said Hall, who has been qualifying consistently in the top half of the field. “I left before the tree was activated in what was the best conditions of the weekend so I got no time on the run.”

Hall’s bike came alive in eliminations as he put up a 6.97 to turn back Krawiec’s 7.01. Hall then scored a huge holeshot win over Michael Ray on the Sovereign/Star Racing Buell in round two before advancing to the final with a semifinal victory over Tonglet, the only non-Buell in the round of four.

On the other side of the ladder Smith took out Arana – who had set low elapsed time and top speed of eliminations in round one at 6.948 seconds, 194.16 mph – with a massive holeshot before winning a 7.018-7.019 squeaker over Scotty Pollacheck in the semifinals

Smith, also looking for his second win of the season, put a holeshot on Hall in the final but his bike was off-pace and Hall took the win 7.03 to 7.06.

“My bike was hurting itself in the semis,” said Smith. “We didn’t have time to change the motor and there was no pressure to because our team had already won the race.”

The US Nationals was the last chance for racers to earn a spot in the “Countdown” to the NHRA championship.  Now only the top ten riders have a chance to win the big Wally championship trophy at the end of the season.  S&S-powered bikes dominate the top 10 rankings, holding the top six spots and eight of the 10 positions.

Leading the way is Hector Arana Jr. on the second Lucas Oil Buell.  After winning the first three races of the season, Arana Jr. has never relinquished the points lead and with the most event wins of any racer this season (four), he is the favorite to win the championship in only his second year of racing.  Following Arana Jr. in the points is Smith (one win), Michael Ray (two wins), Hall (two wins), Arana Sr. (no wins), and Scott Pollacheck (no wins).

The NHRA Countdown to the championship begins at zMAX Dragway in Charlotte NC.