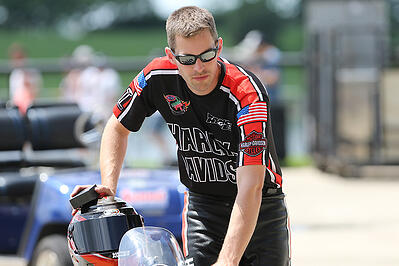 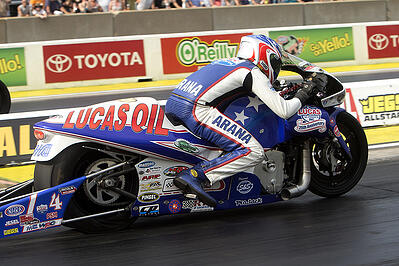 Hector Arana Jr. set both ends of the track record in the tricky, high-mountain air as Andrew Hines took his fourth win of the season at the NHRA Mopar Mile-High Nationals at Bandimere Raceway in Denver, CO.

Hines, riding for Harley-Davidson, scored his second-straight win in the Mello Yello Pro Stock Motorcycle championship with a final round victory over the S&S-powered Star Racing Buell of Michael Ray.

It was Hines’ fifth final round appearance in the last seven races.  He now has four wins on the season – no other racer has more than one. He also has a commanding lead in the Mello Yello points and was the first in the class to lock into a spot in the championship playoff “Countdown”.

The win was his third at the facility he once called his home track having lived in Trinidad, CO, for ten years.

“Coming back to this track is very special,” said Hines.  “I made my first career passes here back in 2002. Bandimere Speedway holds a very special place in my heart.”

The Mile-High Nationals is an outlier on the NHRA tour. The thin, high-altitude air starves race motors and crew chiefs have to throw out their tried-and-true tuning combinations.  Elapsed times are typically off by three tenths of a second.

The Arana family and their S&S power has had the best hold of the track in recent times.  In the three previous years each member of the racing family, Hector, Hector Jr. and Adam, has been a number one qualifier.

At the 2014 edition it was Hector Jr.’s time again. His S&S powered Lucas Oil Buell made the quickest lap in the field for the first three qualifying sessions. He took the pole and set both ends of the track record at 7.178 seconds and 186.72 mph with his runs recorded on Friday, the first day of qualifying.

“It’s a great accomplishment,” said Arana. “It’s nice to know you have a good setup on the mountain. It’s a big deal, even though it’s a one-off race, but it’s pretty awesome to be good at this race.”

Arana Jr.’s performance snapped the five-race streak of number one qualifiers by Harley’s Eddie Krawiec.  Arana Jr. was the number two qualifier at four of those events.

Arana Jr. set low elapsed time of eliminations on Sunday at 7.201 seconds with a first round win over the Suzuki of Charlie Sullivan.

The big surprise of the race came a round later when both Arana Jr. and Krawiec lost to slower opponents on holeshots.   Arana Jr. lost to his father as Krawiec lost to the Power Sports Institute Suzuki of Steve Johnson.

Hines took out Johnson in the semifinals while Ray, who placed second in the Mello Yello standings last season, advanced to his first final since his victory in Chicago last year by getting around the elder Arana.

It is the first time in three races that Arana Sr. has not made the final.

In the Denver final Ray got the holeshot with a telepathic .005 reaction time but his Buell would not shift into second gear allowing Hines to cruise to the win with a 7.246 elapsed time.

In the end, Hines was able to best survive “The Mountain”.

“Every single move you make on the motorcycle is compounded up here because the motorcycle doesn’t have the horsepower to recover from it,” he said. “The straighter a run you can make up here the better. Your shift points are all timed differently on the race track the motor is revving at a totally different rate than at any other race track.”

The next event on the NHRA Mello Yello tour is the Sonoma Nationals at Sonoma Raceway in California, July 25-27.  The event will host the MiraMonte Records Pro Bike Battle, a special event featuring the elite eight racers in the series, which will be held on Saturday during the event. 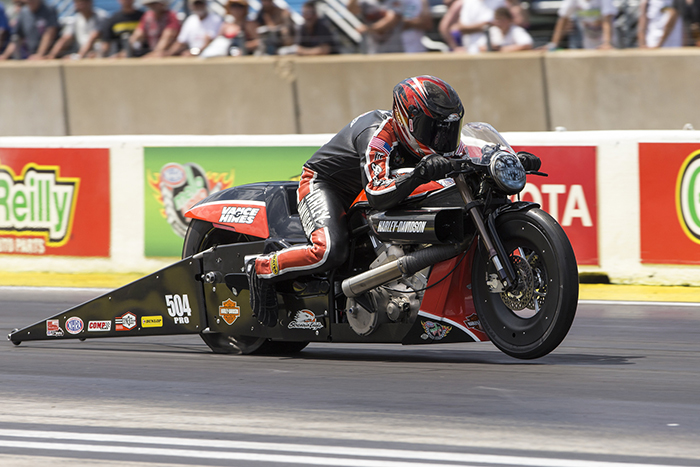