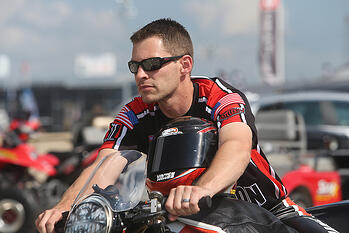 After a two-race slump, Mello Yello points leader and Harley-Davidson factory rider Andrew Hines found the winner’s circle at the NHRA Summit Racing Nationals in Norwalk, OH.  The win came at the expense of Hector Arana, who, after making his second straight final on his S&S-powered Lucas Oil Buell, saw his winless streak extend to 75 races.

While Hines has led the points since early in the season and has more wins than any other rider in the Pro Stock Motorcycle series, for the past few races his bike has been not as fast as the one ridden by teammate Eddie Krawiec.

Following early-round losses a week earlier in Chicago, the team decided a new V-Rod was in order for Hines.

“We’ve been working on the new chassis for a while just to have a spare bike,” said Hines. “After the struggles we have had, we figured it was time to put it in service.”

The bike was fitted with all mechanical and electrical components in the turnaround between Chicago and Norwalk.  Its first lap down the track came at the first qualifying session in Norwalk where Hines recorded a 6.94 second elapsed time to place third for the session.  He ran 6.91 in the second session but slipped to fourth place – seven-hundredths behind teammate Krawiec who set the track record at 6.844 seconds.

Hines couldn’t improve on his number during Saturday’s qualifying session and most of the field got around him.  He fell to the tenth qualifying position as Krawiec went on to claim his fifth-straight number one qualifier.

The Vance & Hines V-Rod Pro Stock chassis are comprised of two separate components to facilitate easy engine swaps.  The rear section holds the rear wheel and most of the electronics and the front holds the motor and the front fork.  The front half of both team bike chassis were replaced last year after the mandated engine configuration change.  The rear halves were constructed in 2009.

Hines stated that the age of the rear half will affect the bike’s handling leading to a cascade of issues.

“The rear cradle takes all the stress of the launch,” he said.  “Since is it so old the bike has become a little ‘darty’ – like it has a mind of it’s own.  It makes it hard to ride and be consistent.  When it is not consistent it is hard to tune.”

The new bike was so different he had to change his riding approach.

“This one is easier to ride,” he said.  “It is way more drivable. I found myself overcorrecting it.  I started to finess it a little more and responded well.”

It all came together on Sunday where Hines scored the low elapsed time of the first two rounds of eliminations with a pair of 6.89s.  Krawiec’s bike deloped a bog and he went out in round two.

The team missed the tune-up on Hines’ bike in the semifinals but it was no matter as he still outran the Power Sports Institute Suzuki of Gainesville winner Steve Johnson to make his fourth final of the year.

Norwalk is a special place for Arana, Sr. He won his first NHRA National event at Summit Motorsports Park in 2008, which was the precursor to his championship season in 2009.  Hines has his own strong memories of Norwalk, winning the race three times including the inaugural event in 2007.

Arana had not won an event since his championship season in 2009 and would have to wait at least another race as Hines got a slight jump off the line and won his third win of the year, 6.90 to 6.92.

“When the bike is running hard it is more consistent,” said Hines when asked how his performance picked up on Sunday.  “When it is consistent we can tune it better.  If it is going straight I can focus on my shift points.  My confidence goes up and that has a big effect on how the bike runs.”

The 2014 season has been a dramatic turnaround for Hines.  Last year at this point in the season he had only two elimination round wins.  This year he has 19.  Last year he was out of the top 10 for the first time since his rookie half-season in 2002. Now he’s leading the points.

The Harley team maintained their one-and-two spot in the points, followed by Hector Arana Jr. and Sr. and the MSR team of John Hall, Matt Smith, Scotty Pollacheck and Angie Smith.

“It’s nice to be in the number one spot again,” said Hines.  “It’s even better with Eddie right behind me.” 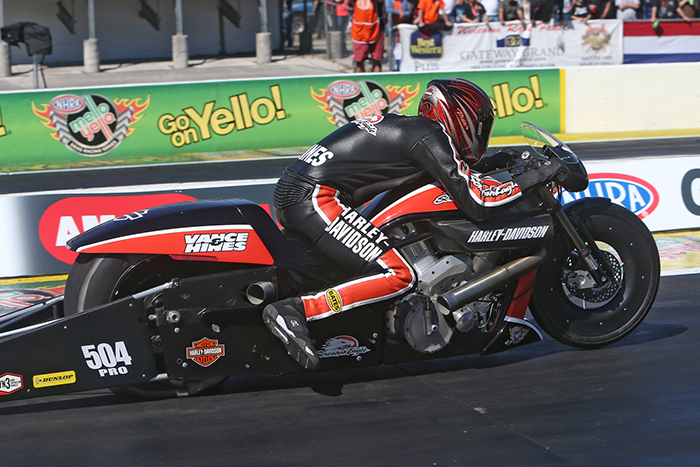