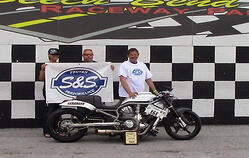 Despite challenging conditions and several new untested combinations, The S&S® Outlaw Street contingent put up a great show for all those attending the AMRA Spring Rally and Races at Beech Bend Raceway Park in Bowling Green, Kentucky. The Field consisted of no less that six different engine/chassis/cylinder head combinations with all but two eclipsing the 150 mph mark. Mike Roberts of Clinton, Ohio paced the group with a 8.86@157.14mph  on his Bob Pettit owned and tuned V-Rod entry. He was followed by myself with a 8.94@156.28 mph with my GMS Racing Engines / S&S 144 cu in 45˚ Pro Stock/big twin hybrid engine, Nick Gonatas (8.98@150.93)  on the Warren Harley Davidson V-Rod, Greg Baugh on his Arch MFG. 143 cu in S&S B1 Evo Combo,  Tim Grindle with a B2-S&S SA Sportster @ 143 cu in turning in a 9.10@153.84, Ken Miller, (Ken Miller Customs) 136 S&S Special Application Pro Stock Headed Twin Cam, Charlie Douglass with his Douglass Racing/Energy one 136 S&S 45˚  Pro Stock sportster at 9.33@152.87, and finally Robert Shuback piloting Grindle’s 140 cu in Evo/B1 machine. Despite valiant efforts by the Beech Bend staff, Mother Nature did her best to challenge the class. Pollen gave the track a yellow tint requiring frequent cleanings and dragging as well as a low pressure area and looming storm front harassing us on Sunday. More than half of the machines were being put down the 1/4 mile for the first time this season, thus keeping wrenches and tuning devices on call throughout the weekend.

The First round of eliminations saw Roberts, Baugh, Douglass, and Gonatas advance to the semifinal round. In the semis, Roberts defeated Baugh 8.89 to 9.15 and Gonatas finished ahead of Douglass 8.816 to 8.914. In the all V-rod final, Roberts took the stripe with a 8.849 to Nick Gonatas’ tire spinning 9.067. It may have been a good day for the overhead cam machines but it was the pushrod bikes that continue to set and hold the ET and speed records. Charlie Douglass reset his 1/4 mile MPH record to 157.17 and I was able to set the 1/8 mile mark to 130.04.

S&S Cycle Inc., Outlaw Street is shaping up to be highly competitive and continues to peak the interest of fans and other racers alike. The next event will be at Rockingham Dragway May 31 to June 1.  Info is available at the Rockingham Dragway, AMRA, and S&S Cycle.