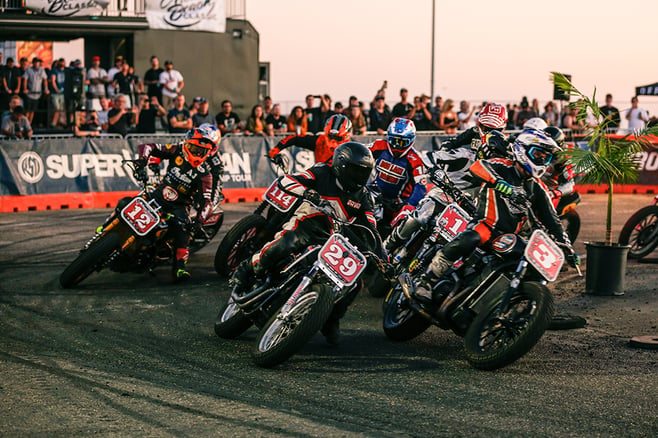 We recently embarked back to the motherland of tacos for the third annual Roland Sands Design Moto Beach Classic at Bolsa Chica State Beach, California.

In a nutshell, this event prides itself on the commingling of surf, rock’n’roll, and motorcycle culture. There is a surf competition held by West Coast Board Riders, a vendor village, live music at SeaLegs at the beach, a Moto classic bike show featuring some very cool customs, the Architects of Inspiration Art show featuring local artists hand picked by Roland himself, and the big highlights are the Bell Brawl stunt show, the Division Super ramp BMX show going throughout the day and of course last but not least, lots of bar banging action on the racetrack for the Super Hooligan National Championship Presented by Progressive and Powered by Indian Motorcycle.

The stunt show was a big attraction for the crowds as they watched riders throw around their 600+lb Harleys and Indians with ease. The insane burnout and wheelie action ended only when rear tires ran out of rubber in an explosive finale! This would also be the finals to this year’s SHNC season, so the pressure was on for the Super Hooligans. Although not as brutal, the Super 73 and STACYC Electric Kids Race before the mains was equally fun to watch. One of the standouts for us was seeing UK based Leah Tokelove rip around the track on the S&S built Indian FTR1200!

Whether you’re a racer, a bike builder, looking to pick up some gear, or just enjoy a cold one and some music by the beach there Is something for everyone so be sure to checkout next year’s Moto Beach Classic!