King of the Baggers - The Build 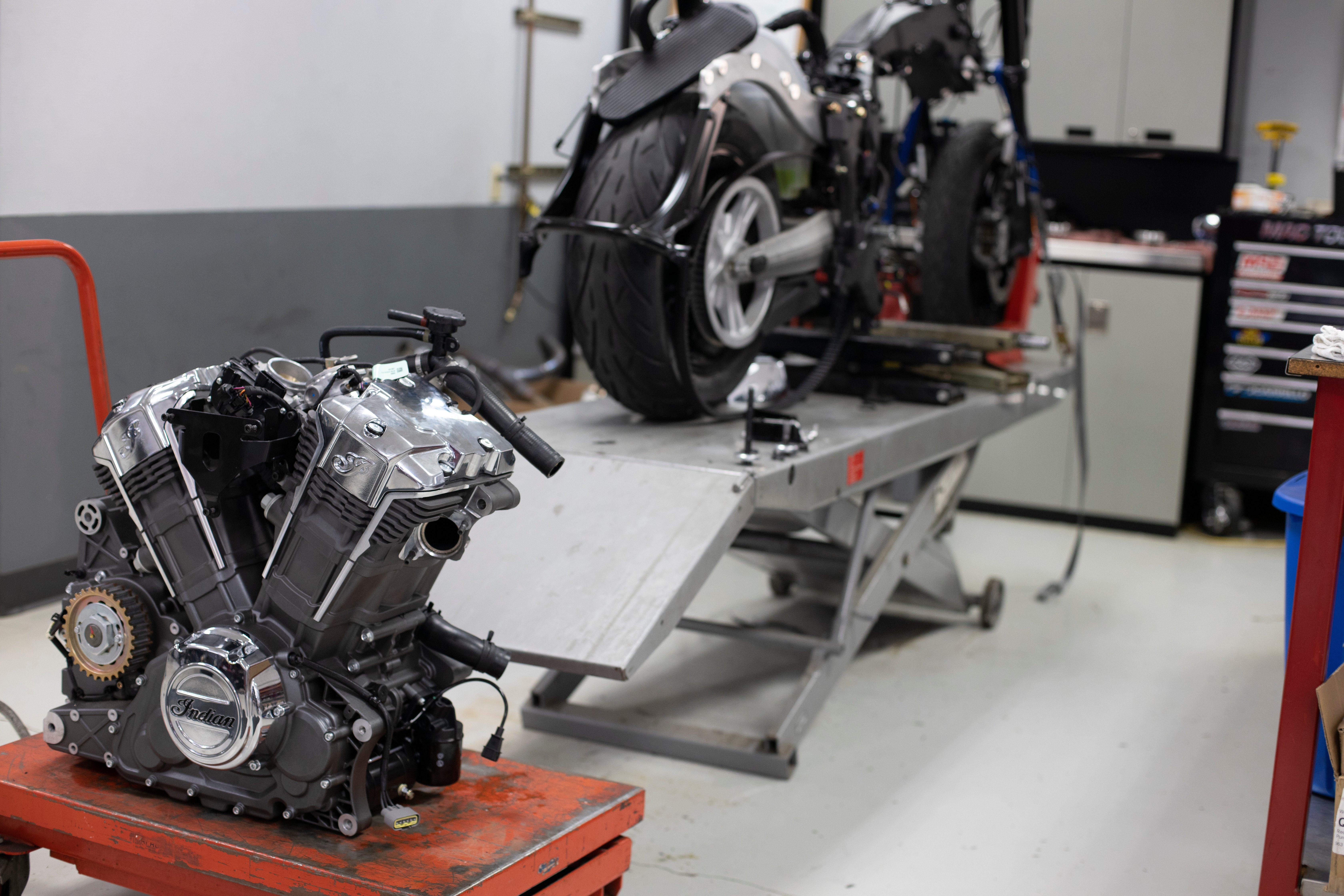 Baggers at Laguna Seca? Monster touring machines lumbering through the hallowed curves of California’s most famous race track? The pundits would dub it as blasphemy and the purists took to their keyboards to express their utter dismay. If there had been an internet in the early days of NASCAR, would the F1 guys have chimed in? Probably, and many years later they’d be caught defecting from open wheel cars to the fan favorite Stock Car circuit. Fun fact; the touring machines did pretty well in Laguna, were damned exciting to watch and the bagger segment of the weekend's events was enjoyed by millions worldwide (don’t tell the sportbike guys)! 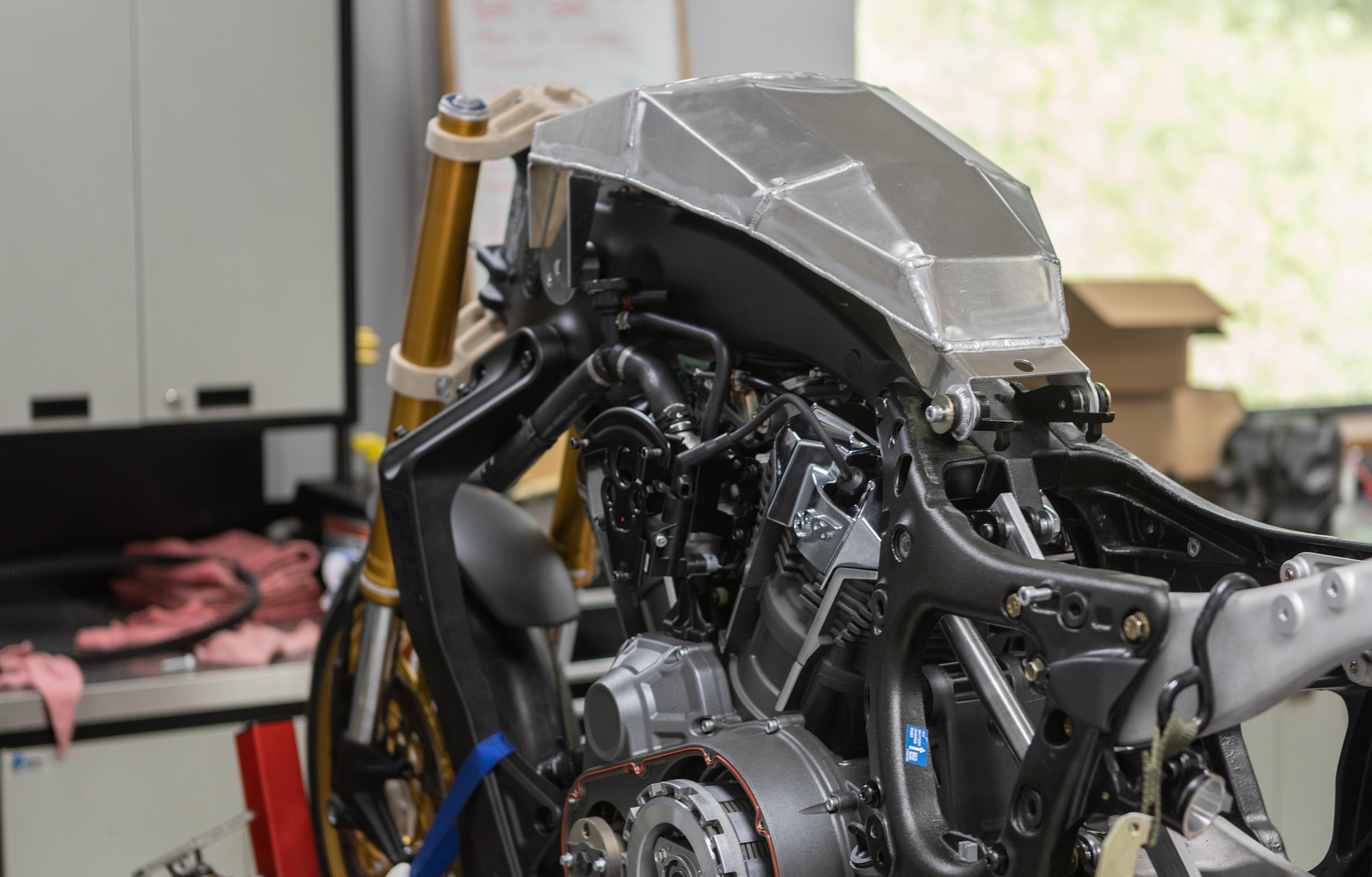 The Drag Specialties King of the Baggers event was conceived as an opportunity for the Big Twin performance aftermarket to give road racing a go and naturally we chose baggers because of the depth and breadth of product in the space (they have also been the number one selling motorcycle in the US since 2007!). Not surprisingly many of the big players jumped in and bike builds were roughed out within days of our initial meeting. At S&S, we’re always up for racing and spent some time pontificating on an appropriate platform for this event. S&S currently manages the Indian Flat Track program, so it wasn’t much of a stretch to extend that relationship and campaign Indian’s latest touring machine. That decision was absolutely fortified once we dug into the Challengers construction. The motor is a stressed member of the chassis and would provide the stiffness a road race bike required, the engine was also tight and efficient (overhead cams and water cooled) and the best part for us, is no one had ever attempted anything like it!

First thing we did? Lay the bike on its side and take a hard look at cornering clearance. Roadracing is rarely about the straights and we knew very well this race would be won or lost in the bends. Once we had a sense of what was going to touch down, we weighed the bike and blew it all apart. This gave us a chance to get familiar with all the components and decide what we could eliminate to reduce weight. We learned a lot! The Challenger PowerPlus 108” drivetrain is really solid, but we knew it would need to live at higher RPMs for this sort of racing. Naturally the more air in and more air out philosophy came into play and we did a mild port job on the heads as well as stage 2 cams to better the performance. A high flow air cleaner from K&N took care of the intake (factory throttle body flowed pretty well!) and we designed a number of stepped 2:1 exhaust systems to get the air out (ground clearance would later decide which one we used!). The primary cover on the left side would be a real challenge that was eventually solved with a giant block of aluminum. The S&S engineering team designed a cover with a massive clearance cut and carved it out of billet aluminum. The right side received a similar treatment to allow the exhaust to tuck in and engine mods did not go much beyond that. 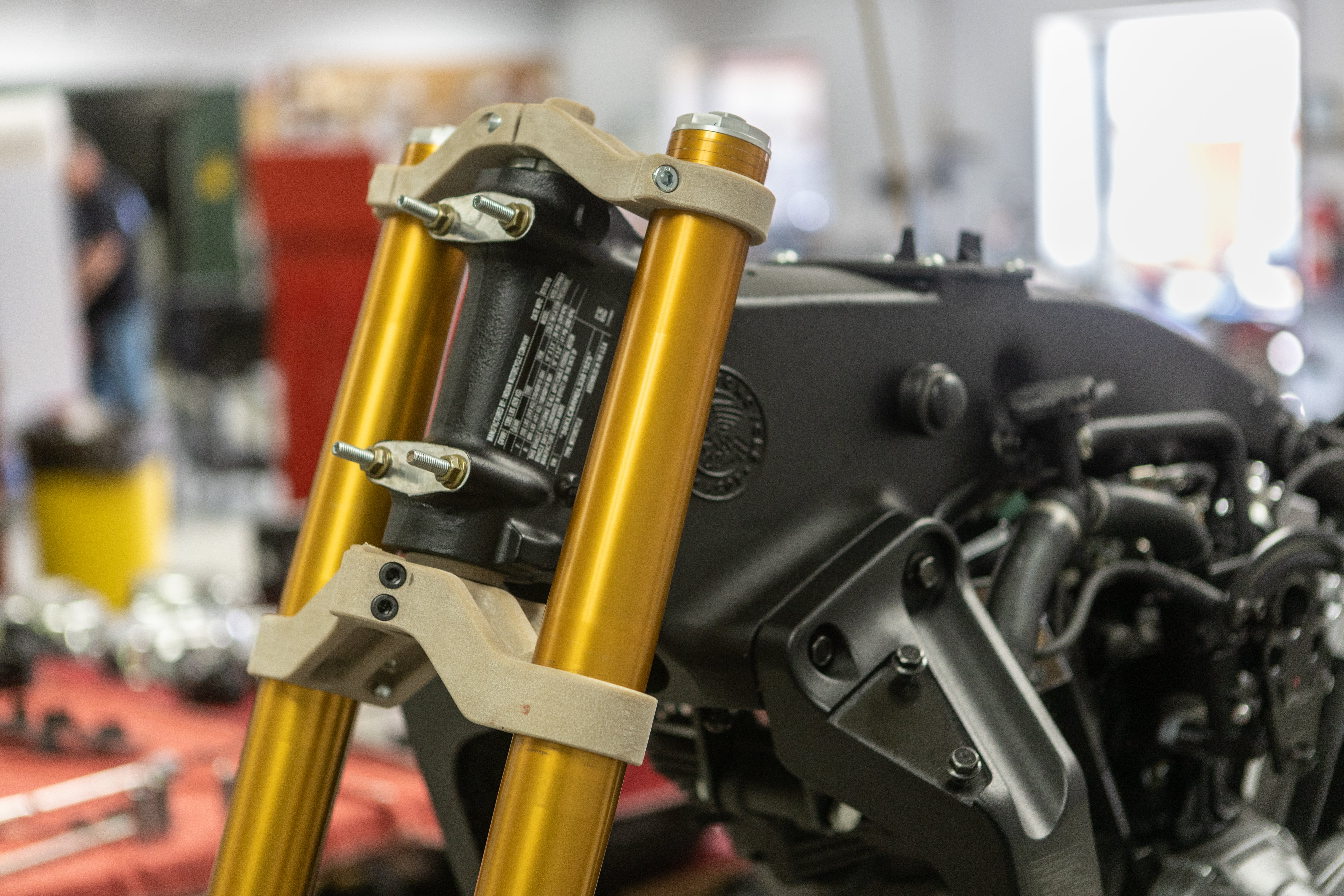 The bike was coming together in early June when we heard the news, the race would be another COVID casualty and was delayed until October. Just as well, we had a number of other projects in play and were in the midst of Flat Track season (spoiler alert, The S&S prep’d Indian Wrecking Crew won the championship again!). Progress slowed a bit, but we did sort out most of the suspension. Having several Indian FTR1200’s in our R&D department proved to be handy as we grafted a set of forks from one of them to the Challenger. Our engineering team designed a set of trees to adapt the FTR forks, initially fitted with a printed part and then machined aluminum for the final. This also helped tune rake and trail to better match the specs of a proper road race bike. Wheels were a set of PM units that we created hubs for to adapt to the Challenger. We also converted the bike to chain using a Vortex unit in the rear with a custom made gear for the front.

Next up was a revalve and spring of the factory Fox shock as well as raising up the rear end to balance out the front and provide the turning clearance that would be required as the bike laid into high speed corners. Once again the machine was on its side and we liked what we were seeing. Rear sets (foot controls) would be the next challenge. They had to be high enough to not touch down (hampered by the wide chassis of a touring machine), but still keep the rider in a position to control the bike with his body. Both sides were designed from scratch to be adjustable and machined by S&S. Now that we had the first set of rider touch points sorted, the bars and seat would be next. The seat was based on a Saddleman pan and built up to hit the perfect position, bars are heavily modified KlockWerks Klip Hangers that allowed us to easily change height and pullback. At this point we had 45 days before the race, the bike was pretty close to rideable, but was shy a fair number of parts and was completely untested. Stay tuned for part 2 where we put on the track!