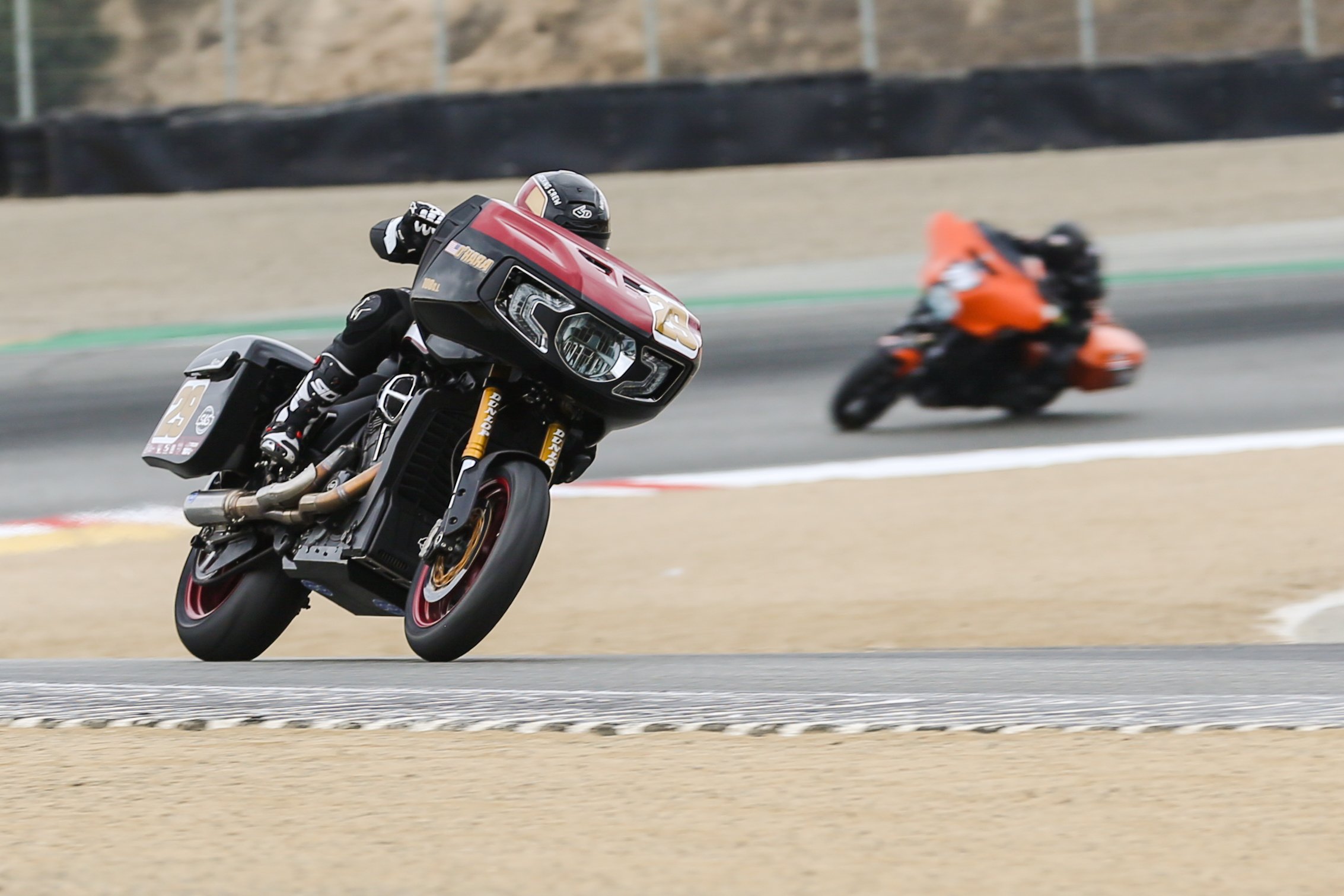 Did you catch the King of the Baggers build and test segments of the blog? If not, give them a read, it’ll help this crazy moto journey make a little more sense. If you have read along, you’ve made it through the bike build, a few track days and some and we now have our intrepid crew on the road heading to the West coast mecca of twisties that is WeatherTech Raceway Laguna Seca.

Located in lovely Monterey California, Laguna Seca is a 2.2 miles track with 180 feet of elevation change, including the downhill plunging Corkscrew that it’s famous for. All of this is a painful 2200 miles from S&S Cycle with the added bonus of winter setting in! MotoAmerica is responsible for this event and requested we keep the crew to a minimum (grandstands would also be empty) so we were also relegated to a tight little team and a well worn Sprinter van in our quest to be king. Luckily weather heading West was in our favor (no such luck on the way back!) so we made it in on time and with minimal drama. 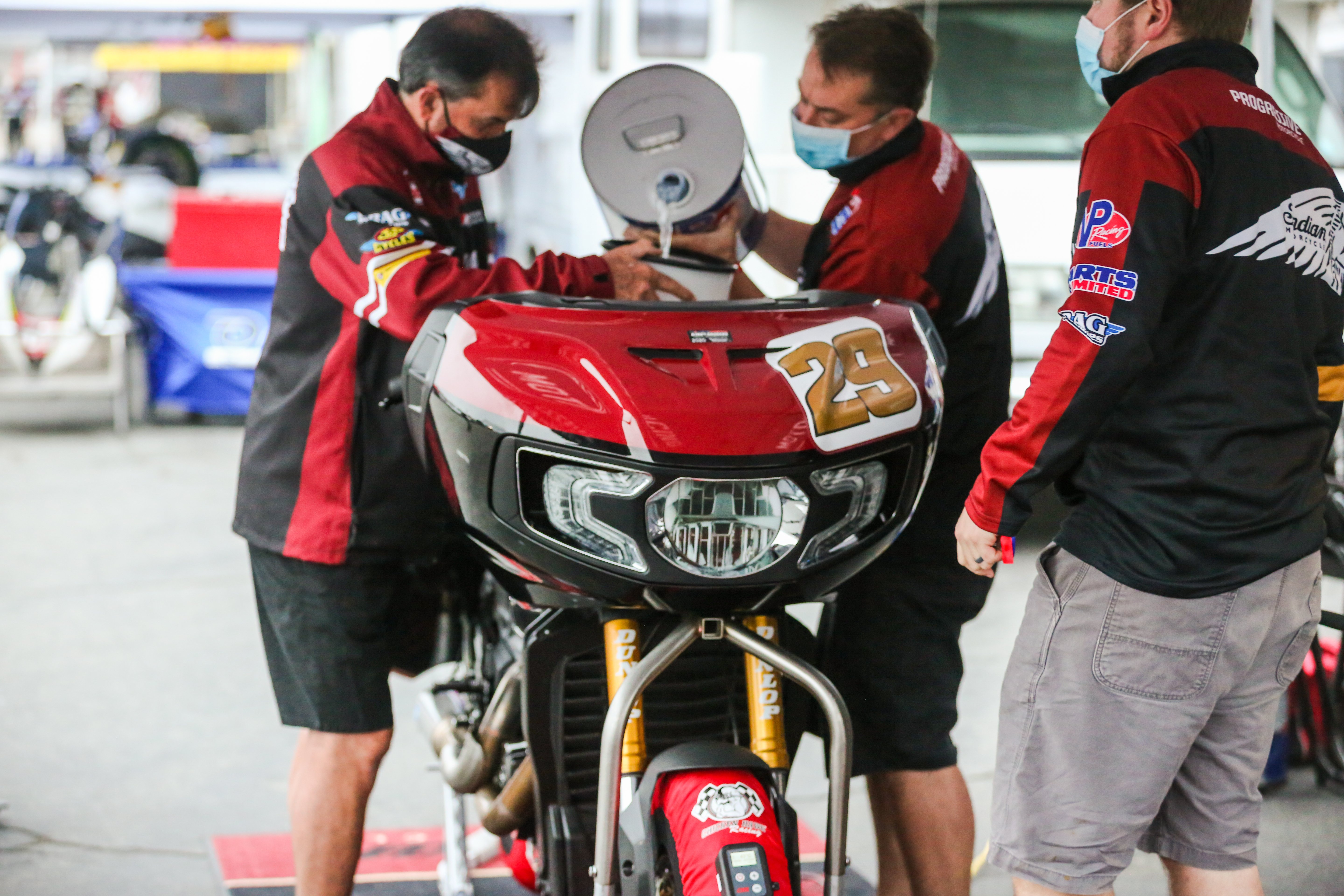 The S&S team set up on Thursday before the race and had a chance to get a few laps in on the eleven turn course. The King of the Baggers was actually held as part of the larger Superbike Speedfest, so there were seemingly endless rows of high end race machines in attendance. The baggers were all pitted together and when it finally came time for our first practice session we piled onto the track. The roar of the v-twins emptied the pits as the purist Gixxer and R1 types flocked to the wall. Guestimates of lap times amongst them had us in the high 2 minute range. Superbikes were lapping at 1:28, so it’s safe to say that was not a compliment. By lap three the bagger times were mid 1:40s and dropping, but not as fast as the disgruntled purists (live and on the internet). Speaking of internet, this was about the time the track images and lap results spread across the web faster than a cat meme. Could it be, baggers were doing respectable times at Laguna? Was it possible to drop a knee on Rainey Curve with saddlebags? The final nail in the haters coffin was watching Tyler and a few others back their bikes into turn two. Suddenly racing baggers was the coolest thing to happen to two wheel competition in 2020 (at least according to the internet)! By the third practice session the S&S Indian Challenger had nearly four seconds on the next bike (also a Challenger!) and triple that over the mid pack guys. To say we were excited would be a gross understatement. Race day could not come soon enough. 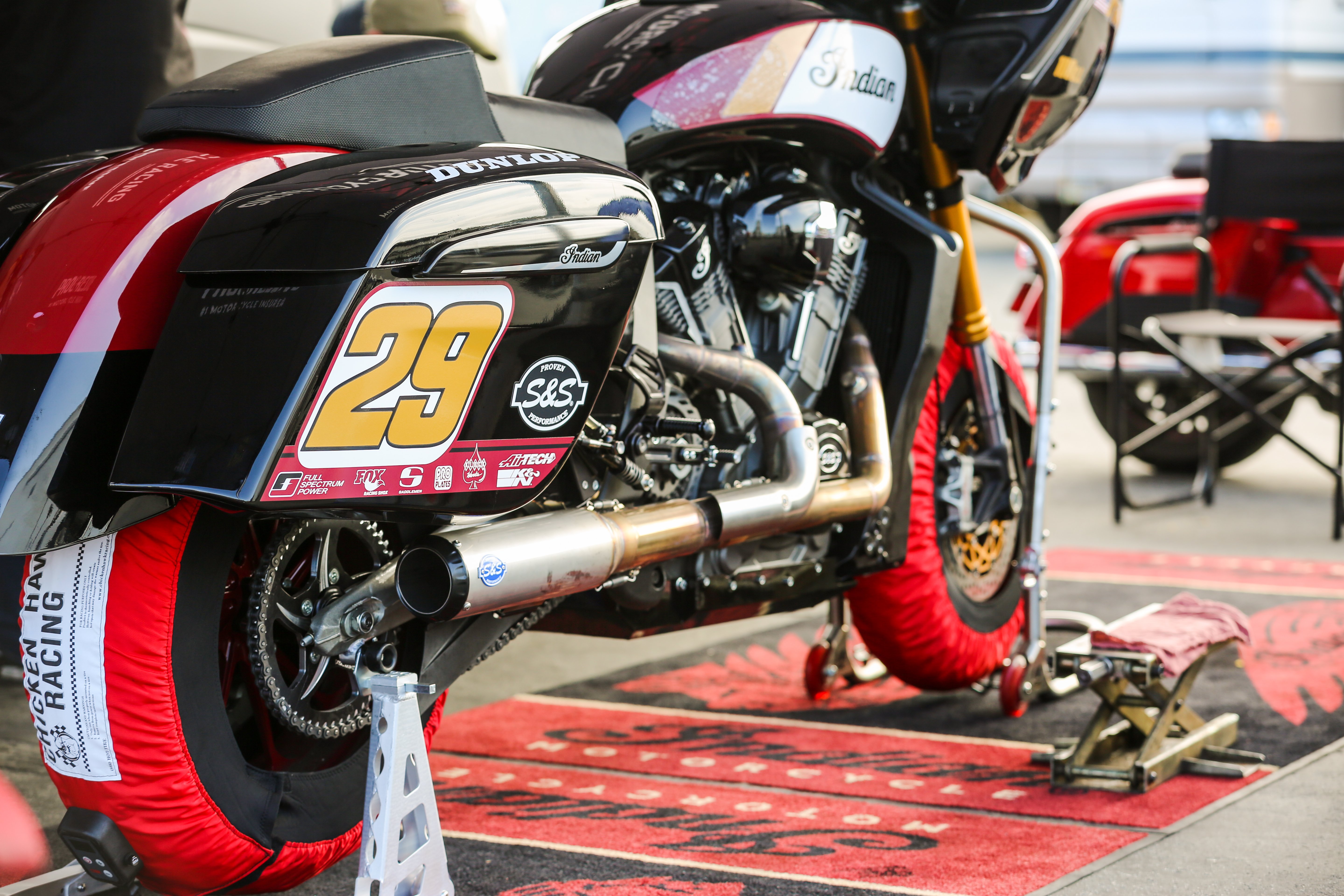 Saturday morning the crew was at the track bright and early prepping the bike, although the baggers were slated as the last race, there was still work to be done. The 4:45pm start would be the first time these monster machines had dove into a corner at the same time and the wall was soon lined with sportbike racers and team members. MotoAmerica’s live broadcast had hit a new record and the internet trolls had all returned to arguing which oil is better. The flag dropped with RSD’s Challenger mounted Frankie Garcia getting the holeshot and the V&H machine soon passing him. The S&S team members held our collective breath as the bikes left our view.  The race would only be 8 laps, so an early lead would be mission critical. By the next time we saw our Challenger it was out front, although closely trailed by Garcia and Gillim who were riding hard and backing it into every corner they could. A handful of bikes had dropped out, but the top three remained only a few seconds apart. 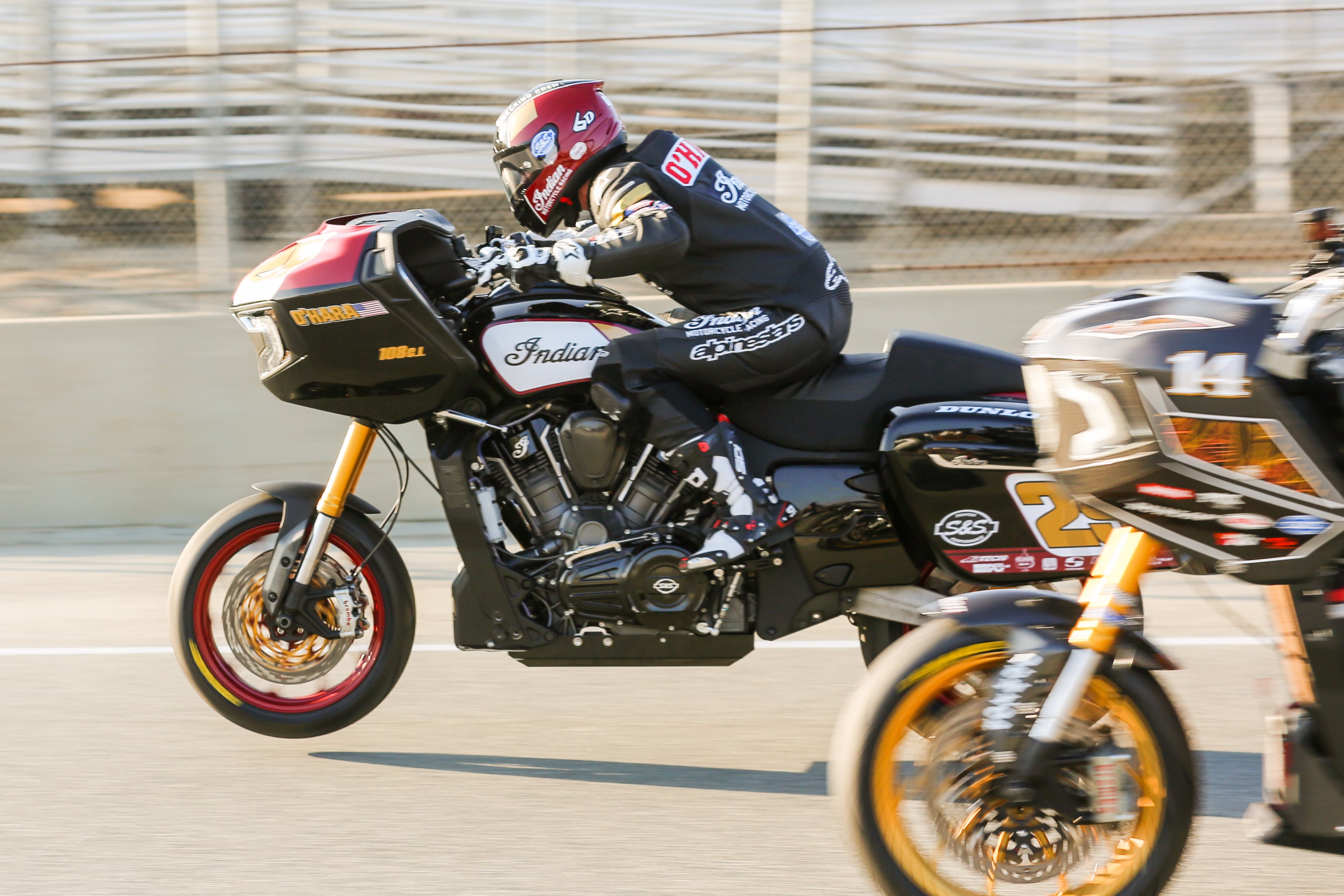 Then the unthinkable happened, mid lap three Tyler came in hot and the bike slid into the sand that surrounds the track. The nearly 600lb machine bucked and weaved and made every effort to throw itself to the ground like a bratty six year old deprived of ice cream. Tyler was having none of it and muscled the angry bike back onto the track, losing two spots in the process. Within a half of a lap he was back on pace, but now in third spot This would be the point where enthusiasts around the globe began yelling at their computers. In short order the Challenger made it around the RSD Indian and went after the race leading Harley. Only a handful of laps left and both bikes were running full noise, dicing through the corners and using up most of the track in the process. Getting around the orange bike was looking like it may not happen and then it did. 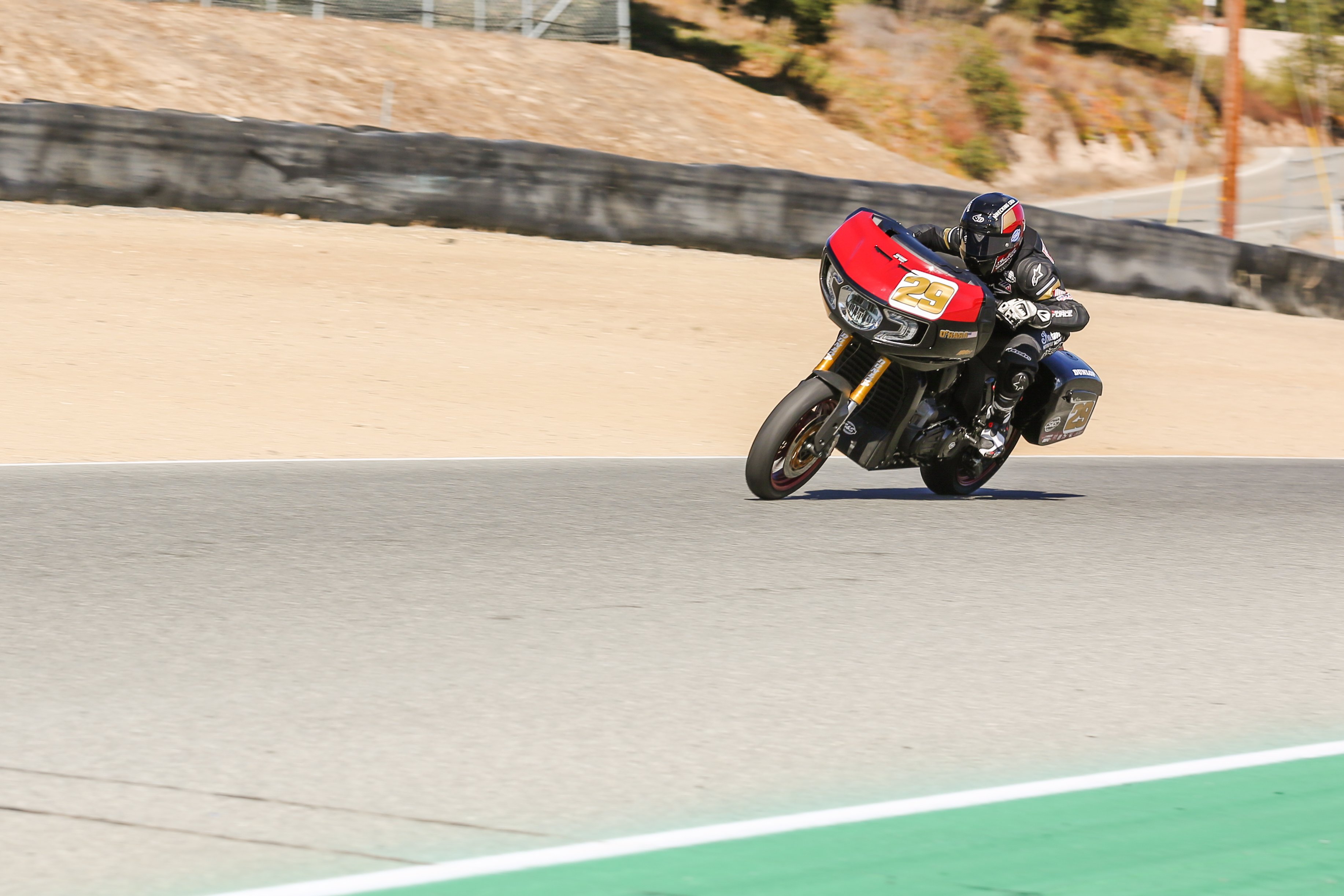 Tyler came into the infamous Corkscrew hard on the brakes and made it under Gillim in what was easily the most epic pass of the race, possibly the entire weekend. The S&S team lost it in the pits, the crew back home in Wisconsin was screaming just as loud. A pass in the Corkscrew is a bold move, even more so on a massive bagger and required moves that had not been invented yet.. O’Hara kept the lead, pulling away in most corners and made it to the checkered flag, cementing S&S Cycle as the absolute King of the Baggers! 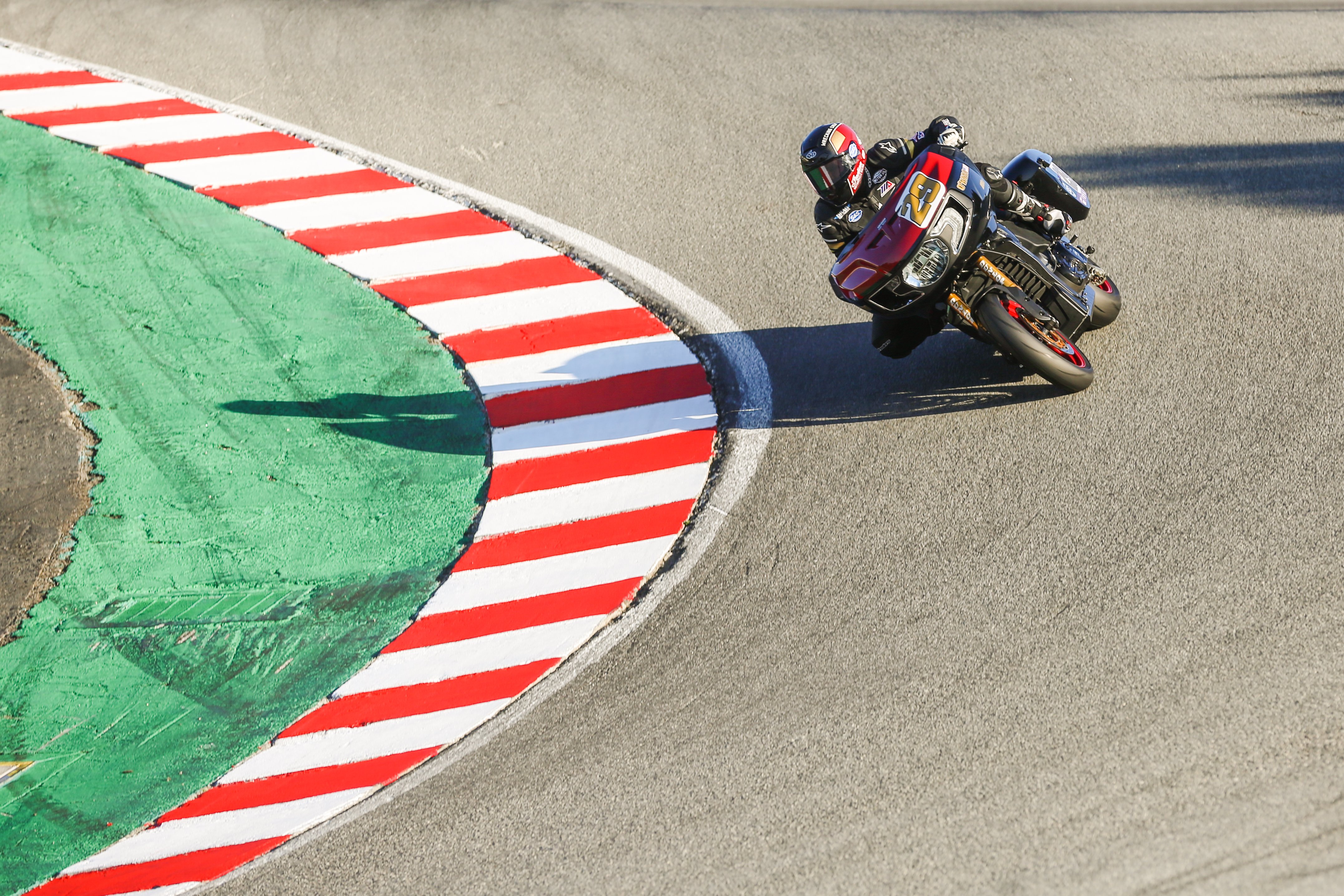 Since then, the moto side of the internet has been on fire, we’ve done countless media interviews and the KOTB is slated for a three round series in 2021. We’re grateful for the invite as well as for the S&S team that devoted a huge amount of time to make this happen. Special thank you to the very talented Tyler O’Hara for taking our bike and showing the world how damned amazing bagger racing can be.