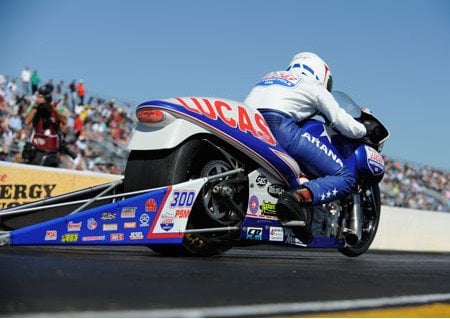 Another exciting weekend of NHRA racing concluded at the Arizona Nationals in Chandler, AZ near Phoenix.  Here at S&S we are particularly excited about the performance of Hector Arana and his son Hector Arana Jr. on their S&S Powered Buell® drag bikes.

The big news is that Hector Jr. won the event in the Pro Stock Motorcycle class.  This is the second win in a row for Hector Jr. and the third this season.  Jr. has been on a hot streak, reaching the finals in four of the last five races.  Son and father qualified one and two for this event.  Hector Jr.’s number 1 qualifier was his third in a row and sixth of the season, giving him the track record for the Pro Stock Motorcycle class.

In the final Hector Jr. cut a perfect light with a 0.000 reaction time and ran a 6.884 ET at 194.30 mph, beating national points leader Eddie Krewiek and his Vance and Hines V-Rod®.  As a result of his performance at this event Hector Jr. now trails Krewiek by only 10 points.  Hector Sr. is 9th in the points standings.  Because this is Hector Jr.’s first year of competition, his performance at the Arizona Nationals is a positive step towards winning the Auto Club Road to the Future Award given to NHRA's top rookie.

The remaining two NHRA events, Las Vegas and the finals in Pomona, will determine the national championship.  Hector Jr. is in the thick of the race and could walk away with the title this year.  Stay tuned for some very exciting drag racing!