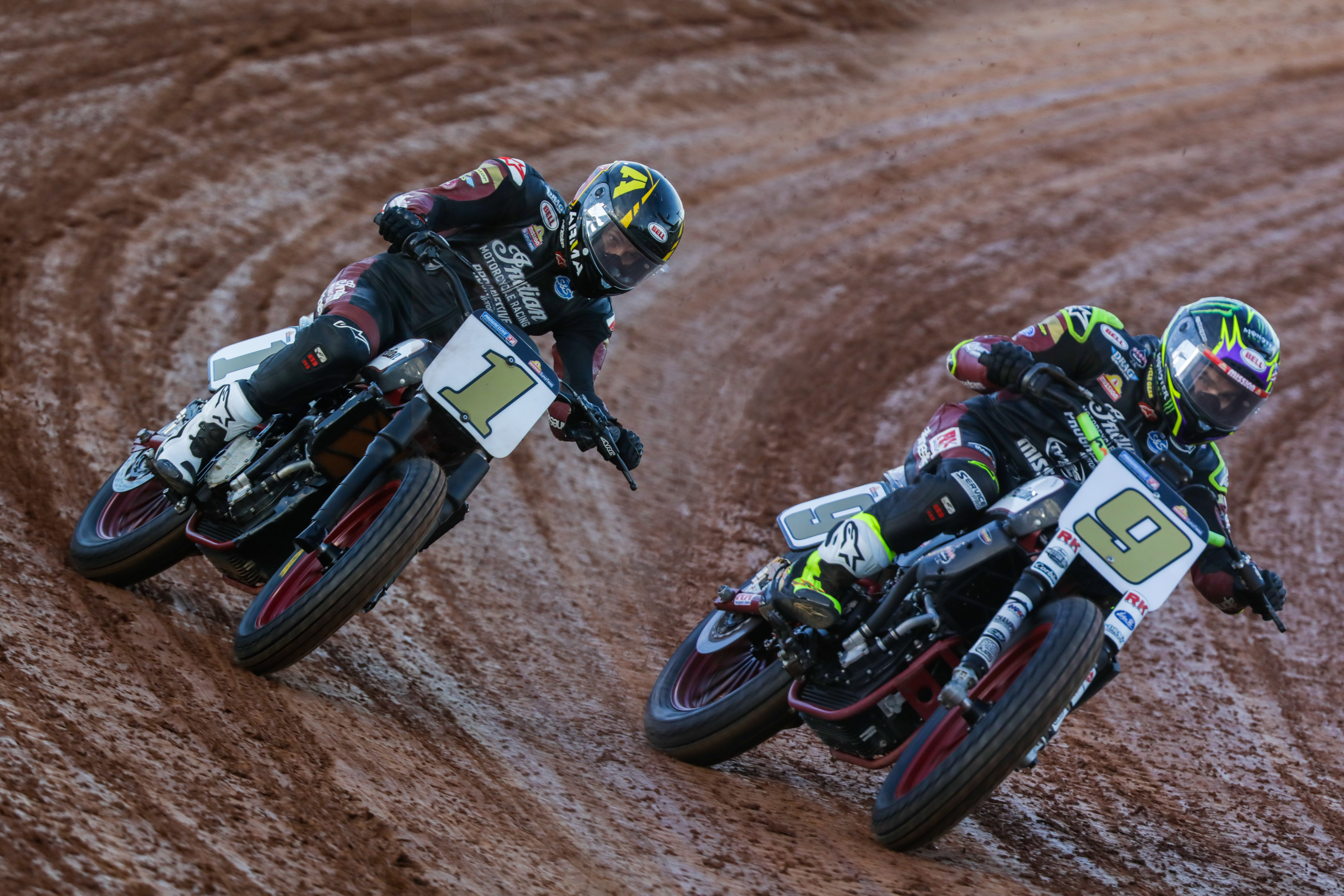 The 2021 American Flat Track season has been one for the books! Combining rainouts, injuries, mid-season rule changes, and unexpected lead swaps with a final do-or-die showdown at The Dirt Track at Charlotte. After eighteen races, only four points separated the Indian Wrecking Crew's Jared Mees and Briar Bauman. Neither of them had shown up in the Tar Heel State for a number two spot.

Dead center in the heartland of racing, Charlotte's clay surfaced half-mile is a fan favorite. This Friday, it waited patiently under gloomy skies as teams watched the prep crew work furiously to push out rain-induced moisture only to have a new storm unwind their hard efforts. Racers watched dark clouds from underneath their branded canopies, and mechanics tidied up pit areas that didn't really need it.

It was clear we would not be racing by late afternoon, and AFT called it for the day. The new plan was an evening start on Saturday that would allow for a solid day of track prep. The crews left for the night, a little dejected and a little hopeful we'd be back in twenty-four hours.

Saturday dawned with a bit of sun and a light breeze, both crucial for pulling moisture out of the dirt. By five o'clock, the track was actually showing dusty spots, and the roar of bikes filled a hopeful paddock. The looming flat track battle royale was finally here, and the excitement was unmistakable. Jared is a multi-year champ with the focus, training, and dedication that rivals an Olympic contender. Briar is the young gun with pure natural talent and a few recent championships. Who would come out on top tonight? It was anyone's guess.

The first Qualifying session went in favor of Mees, with only fractions of a second separating the two. Fresh rubber and race faces filled the Wrecking Crew pits as they prepped for Q2. Bikes were examined with a fine-tooth comb as mechanics looked for even the slightest advantage, and dark skies loomed.

Abbreviated sessions had the riders back on the track fairly quickly and would see Mees out in front for most of the second qualifier. Still in good spirits, Briar and his crew came back to the pits and doubled down on bike prep. The tension was thick enough to cut with a proverbial knife, although Briar seemed oddly chipper. Was he sandbagging? Low key tactical moves may have escaped the average viewer, but we could tell he had something up his sleeve. The semi would see Briar pull a decisive lead and never look back with nearly a second on Mees and well ahead of the rest of the pack. He also seemed to be using parts of the track the others had not, running high in the corner and dropping down through ungroomed soil. It was still either racers night, with both Briar and Jared looking blisteringly fast on the rapidly changing clay surface.

Next up was the SuperTwins Mission Challenge, the flat track version of the "dash for cash" and worth a cool $5,000 for the winner with the top four guys running only four laps. Briar jumped the gun and was forced to start on the third row, which killed his chances at the money, but gave him the opportunity to run the bottom line he'd been testing all night. It didn't get him what he needed, and Mees walked away with the cash. Special shout out from the flat track community to Mission Foods for jumping in with one of the coolest Powersports sponsorship programs to date!

Now for the big show, the race we'd all been waiting for, the race that would determine the 2021 SuperTwins championship. The crowd grew silent as the green light flashed. Briar would spin on the slippery clay and drop back several spots into turn one before gaining momentum and running side by side with Mees through several corners. They advanced through the pack, both laser-focused on the top spot on tonight's podium. Not even three laps in Kolby Carlile went into the hay bails and shut the race down. They'd now have to restart, and none of us would be breathing until the riders were back on the track.

The restart would see Jared and Briar swap the lead for a few laps until Bauman made a decisive move and pulled away. Mees trailed for three more laps as Briar tested the very edge of traction to stay ahead. It certainly looked like his exploration of fresh lines had paid off as Mees was unable to gain on Briar, and an AFT threepeat looked to be in the cards for Bauman.

Briar would ride high and then drop through the soft stuff to grab traction and rocket into the straight, a tactic that came with a certain amount of risk but one that also kept him well ahead of a high-speed pack. Midway into the ten-minute main, Briar crossed over that razor's edge of traction that had kept him up front. He got loose in turn four and tagged the last few bails coming out of the corner. The result put him hard into the unforgiving Carolina clay and sent his bike back onto the track, with Mees and a few others just missing it. 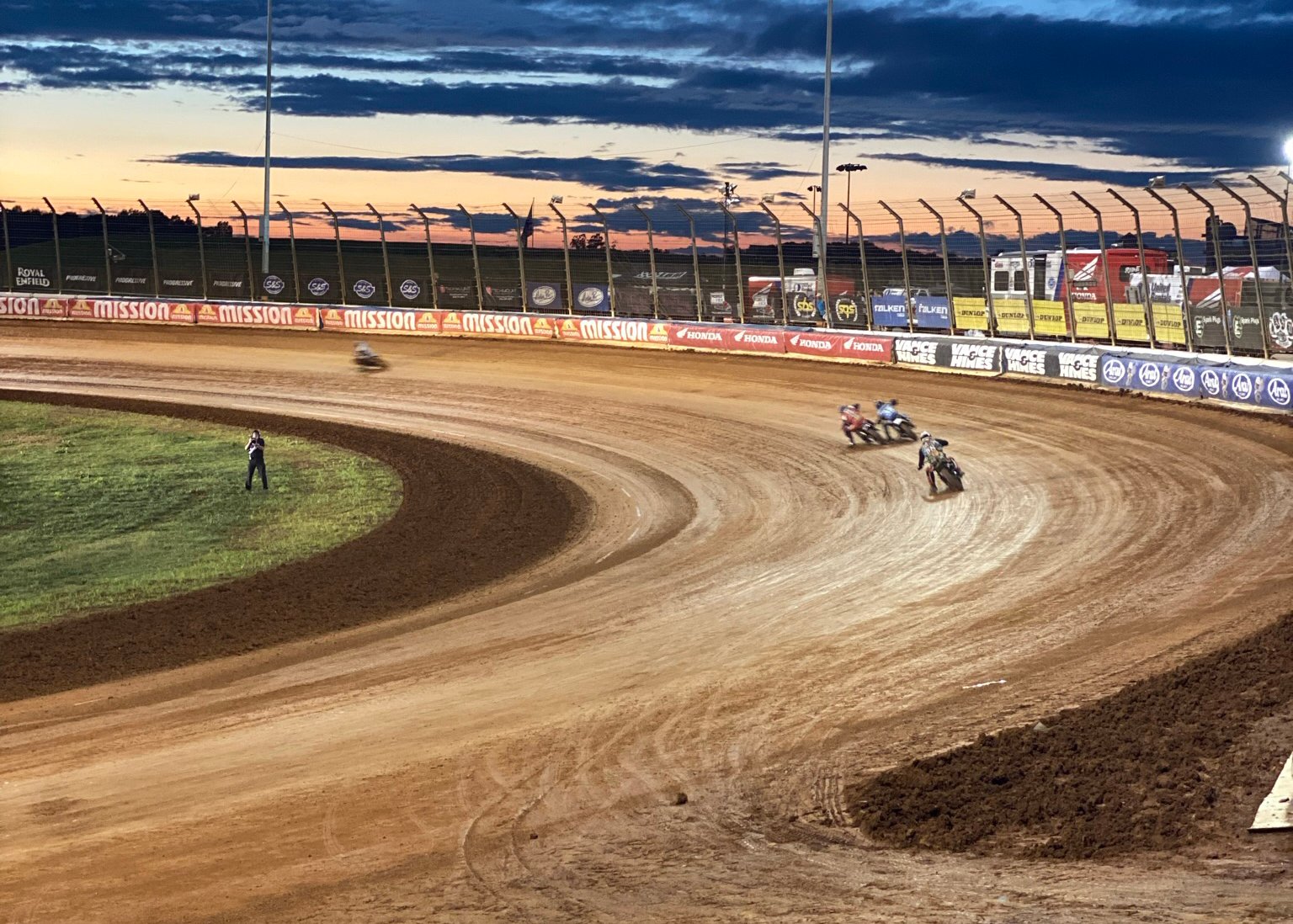 Sammy Halbert was charging hard through the same corner and was not as lucky, slamming into the downed bike at full speed, separating him from his machine and sending Halbert cartwheeling down the track. Both Sammy and Briar were conscious and talking after the horrific crash, but this race was not going to be the same without them. Both riders left in ambulances, and the mood in the paddock soured. The second shout-out of the season goes to Alpinestars and their revolutionary air suites for keeping our guys safe in even the gnarliest of crashes!

The SuperTwins would line up for a third time with a surprise return from Briar now on his backup bike and starting with nine riders in front of him. He seemed to be working through some pain in his shoulder but showed no hesitation to grid up.

Could this get more dramatic?

Mees jumped into the lead as Briar tried to get around slower riders. JD Beach and Davis Fisher never let Mees out of their sight. Then it happened, lap one would see Briar roll off the track, the pain from his get off clearly too much to keep going. Not the way any of us wanted to see the season end for this young racer.

Beach and Fisher would battle with Mees for the remainder of the race. Ending with a bold last-second pass by Fisher to take his first SuperTwins win! This put Mees in second place for this race but clinched the Number 1 Plate for the season. 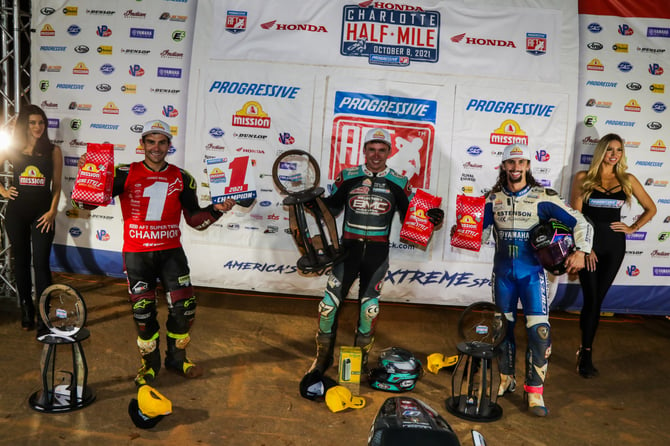 Hit your way back machine to racing commercials of yesteryear, and you may recall the line: "You pay for the whole seat, but you'll only need the edge." What a fitting description of the 2021 American Flat Track season! We're all headed back to the shop now, and the team already has plans for next year, with a few surprises you may like!

Kolby has some new hardware in his leg but is in good spirits. Briar is bruised but seems to be solid. Sammy got the worst of it with a broken wrist and ankle and a nasty gash over his eye, but he and Briar made it to Sunday's awards banquet, and both are already planning their 2022 season.