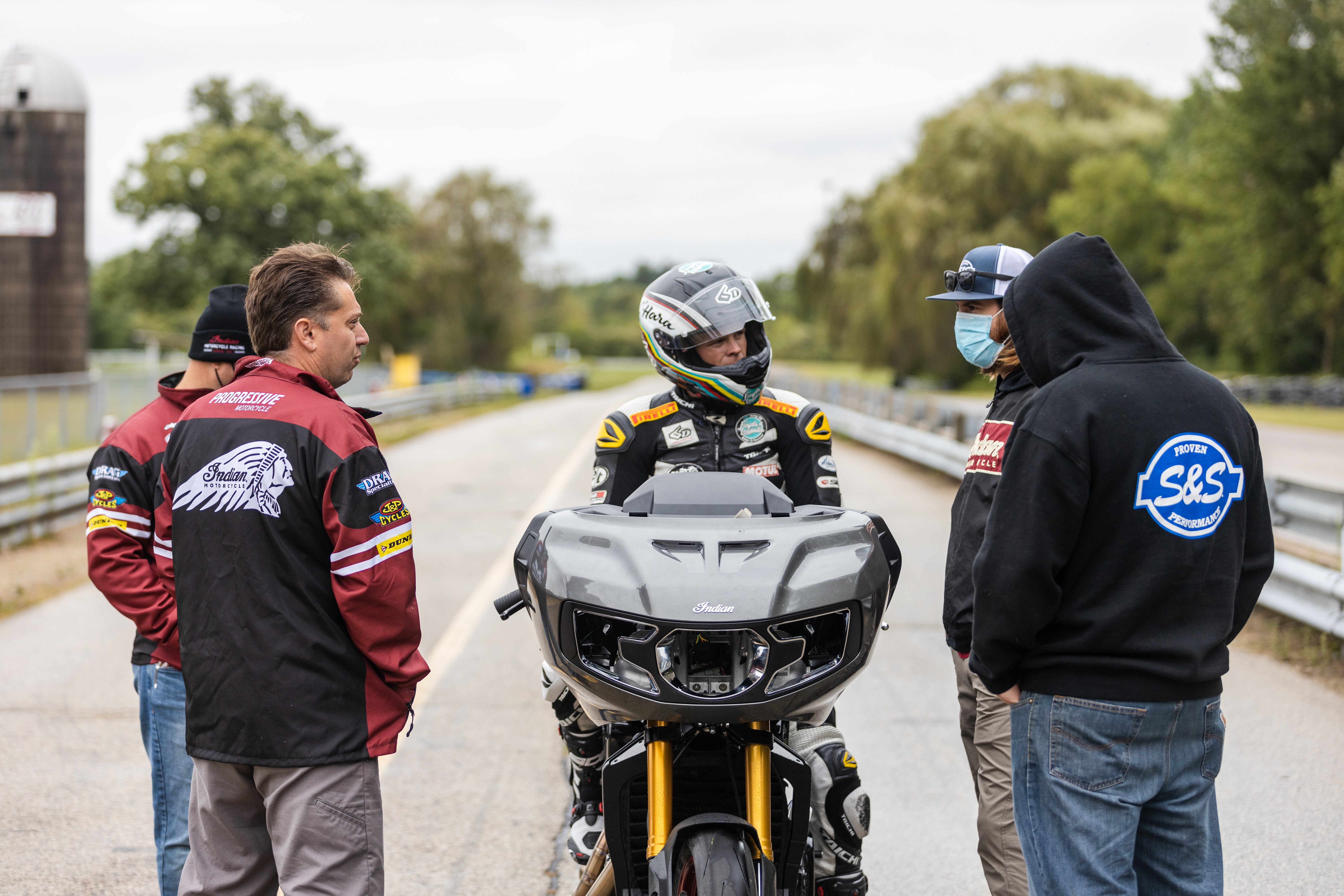 Our first track day was now scheduled for early September at the Blackhawk Farms in Beloit Illinois and we had chosen Tyler O’Hara as our rider for his experience with the XR series as well as an incredibly diverse racing resume. The pieces were coming together and flew Tyler into Wisconsin for the test. First day was spent fitting him to the bike and a quick jaunt around the local twisties. He immediately made friends with the machine (we could hear it echoing through the local hills) and came back with positive reviews and a big smile. The scheduled track day came and was unfortunately greeted with a deluge of rain, killing some of the fun and meaning we wouldn’t be getting the critical data we needed. Not a great outcome, but not a surprise for the midwest. At the very least, we did learn the aluminum fuel cell would need an alternative pickup point to keep the flow consistent and we had fitted Tyler to the machine, so that was at least a step in the right direction. 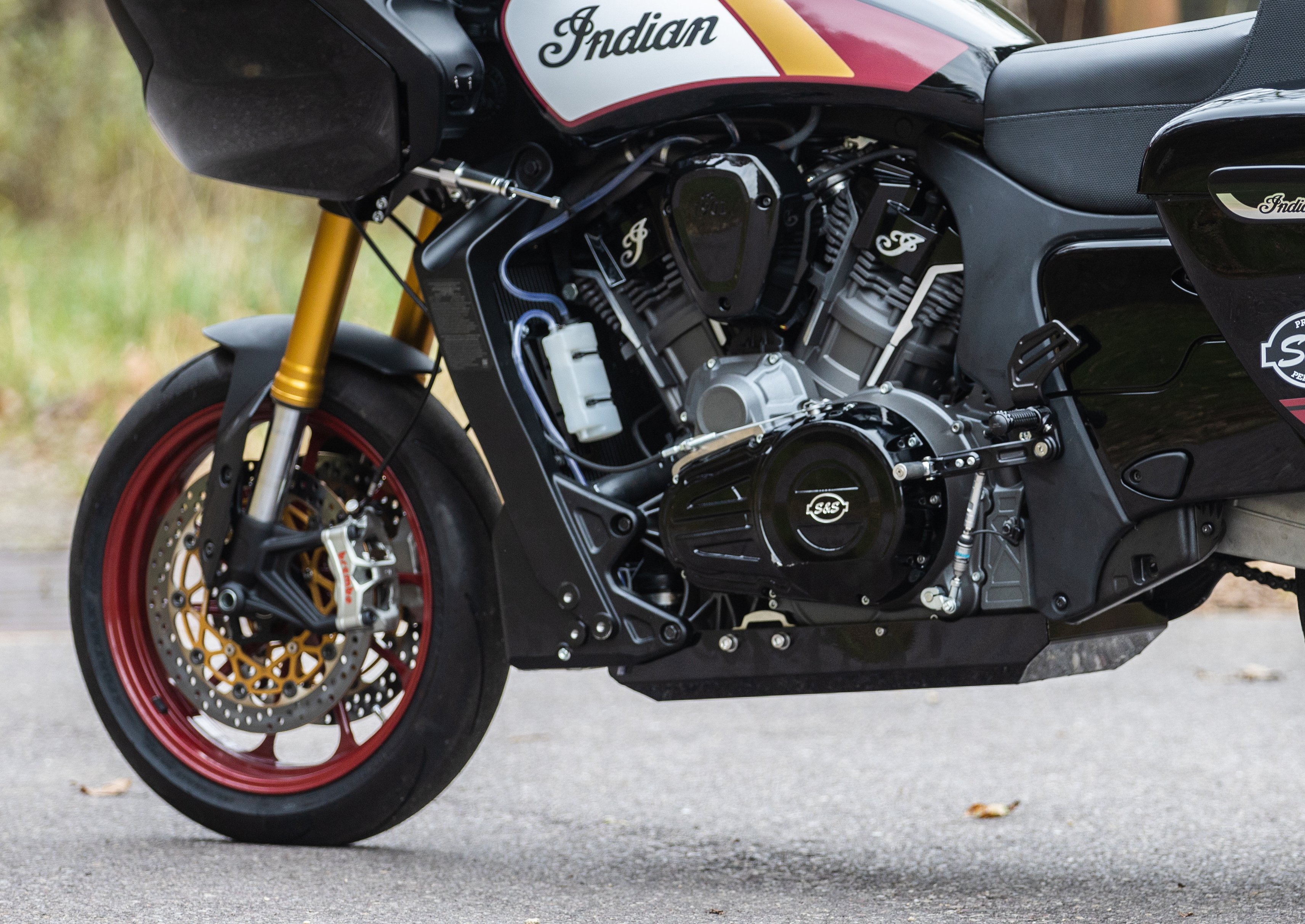 Carbon fiber bodywork from Air Tech in California had started coming in and was a true work of art. The tank would serve as a cover over the aluminum fuel cell, the rear fender stayed fairly true to the factory unit and the front fender was a hybrid that looked the bagger part, but mounted to FTR forks. The bags would come in later and the team at Indian were scheduled to handle paint work. The seat was mocked up and sent back to Sddleman for cover work as well. 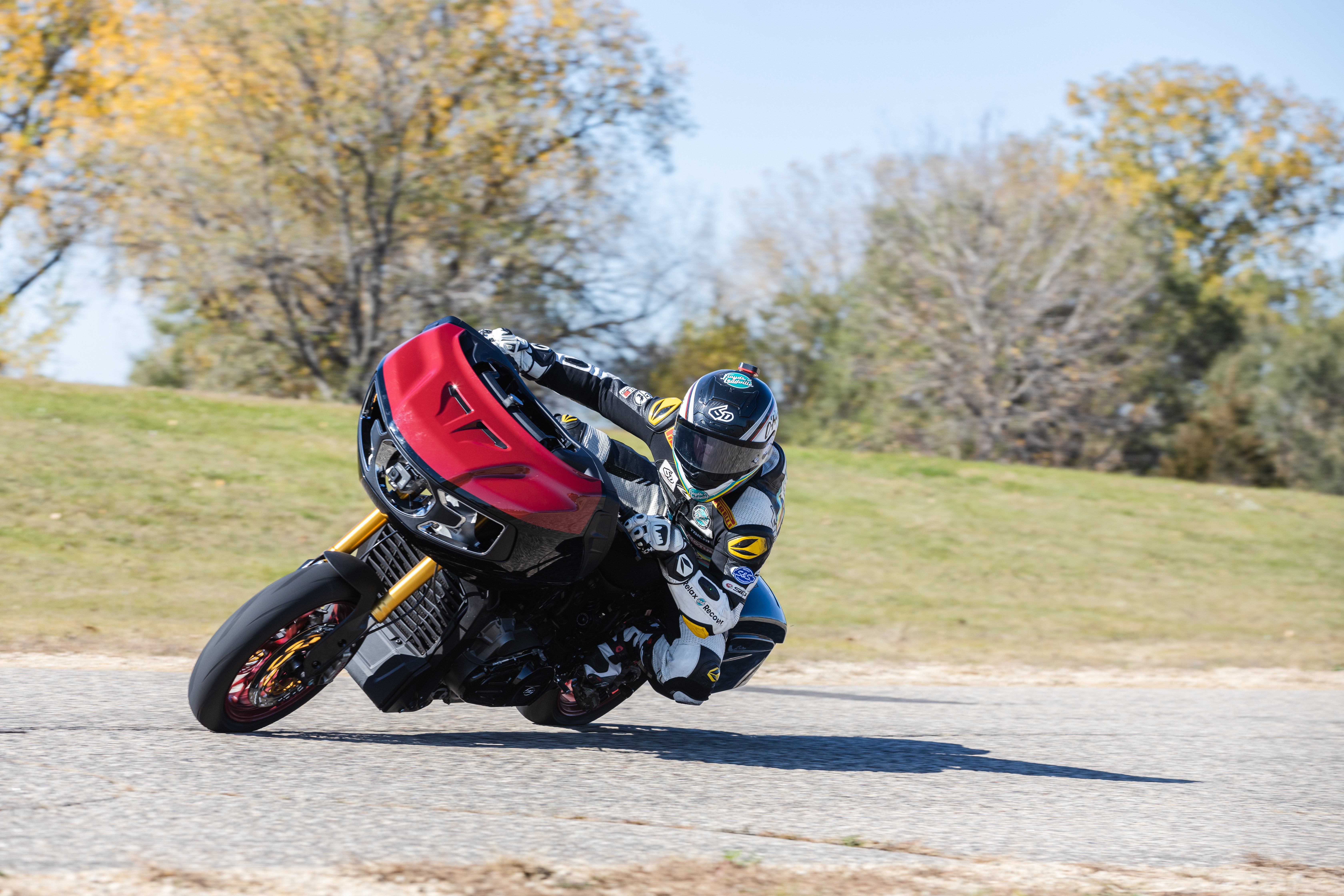 As we got closer to race day it became clear we needed to get more track time under our belts and the midwest weather was already working against us. Rolling into Laguna with testing would have put us at a serious disadvantage and the team was getting nervous. At the last possible minute, fate would smile upon us in the form of a secret test track and we loaded up the bike and team and blasted North for the day. We would have the track to ourselves, but it was near the facility that owned it, so a few onlookers had gathered to see where all the noise was coming from. Tyler circulated the track and the crowd seemed to be growing. “Is that really a touring bike?” “Did you see how low he is in the corner?” were heard over and over. With each lap Tyler saw better times, gained confidence and seemed to better understand what the bike could do. After a handful of bar and suspension tweaks the times dropped even more and it became clear to the team all the after hours and weekend effort may actually pay off. First thing we learned is Tyler had zero fear of dropping it into a corner, braking hard and twisting the throttle like it was a sportbike. The second lesson was we’d need to build another exhaust system after he dragged it all over the track! Most of the other tweaks were minor and the team left the test day happy with the build. The final bodywork was on its way and a few other parts would arrive in the nick of time. Five days before the race, we did a quick photoshoot and the Challenger was loaded into one of the S&S Sprinter vans. Two of our guys hightailed it West where we’d meet up with Tyler at the track for practice and a late Saturday race. Although we were really happy with the last test, we also knew several of the other bikes had come in lighter and most would have more horsepower (Rules let the HD’s go to 131” while the Indian was limited to 108”). That weighed heavily on the team, although our rider did not seem to share their concern. Stay tuned for part 3 where bagger racing upsets the purists and melts down the moto end of the internet 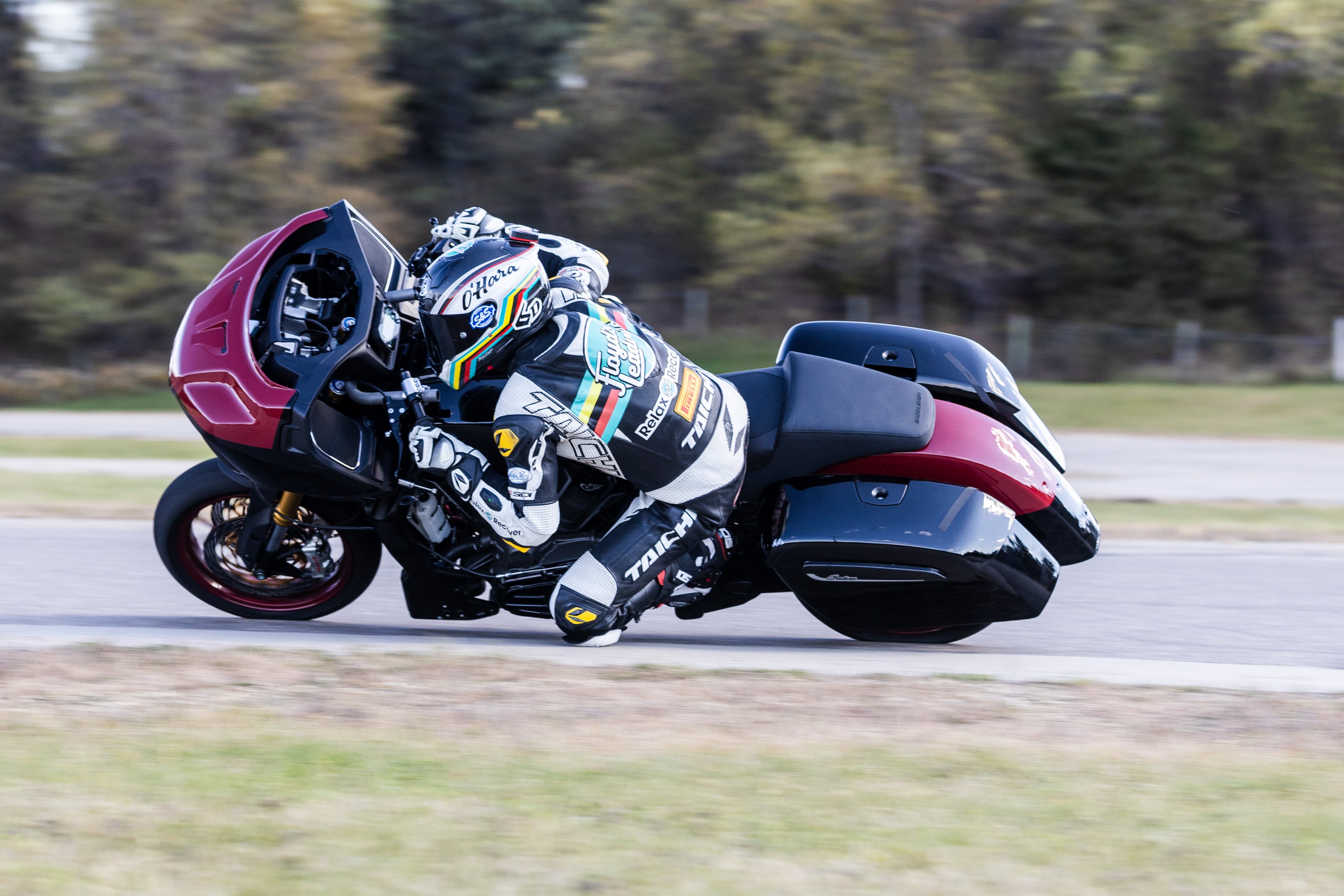 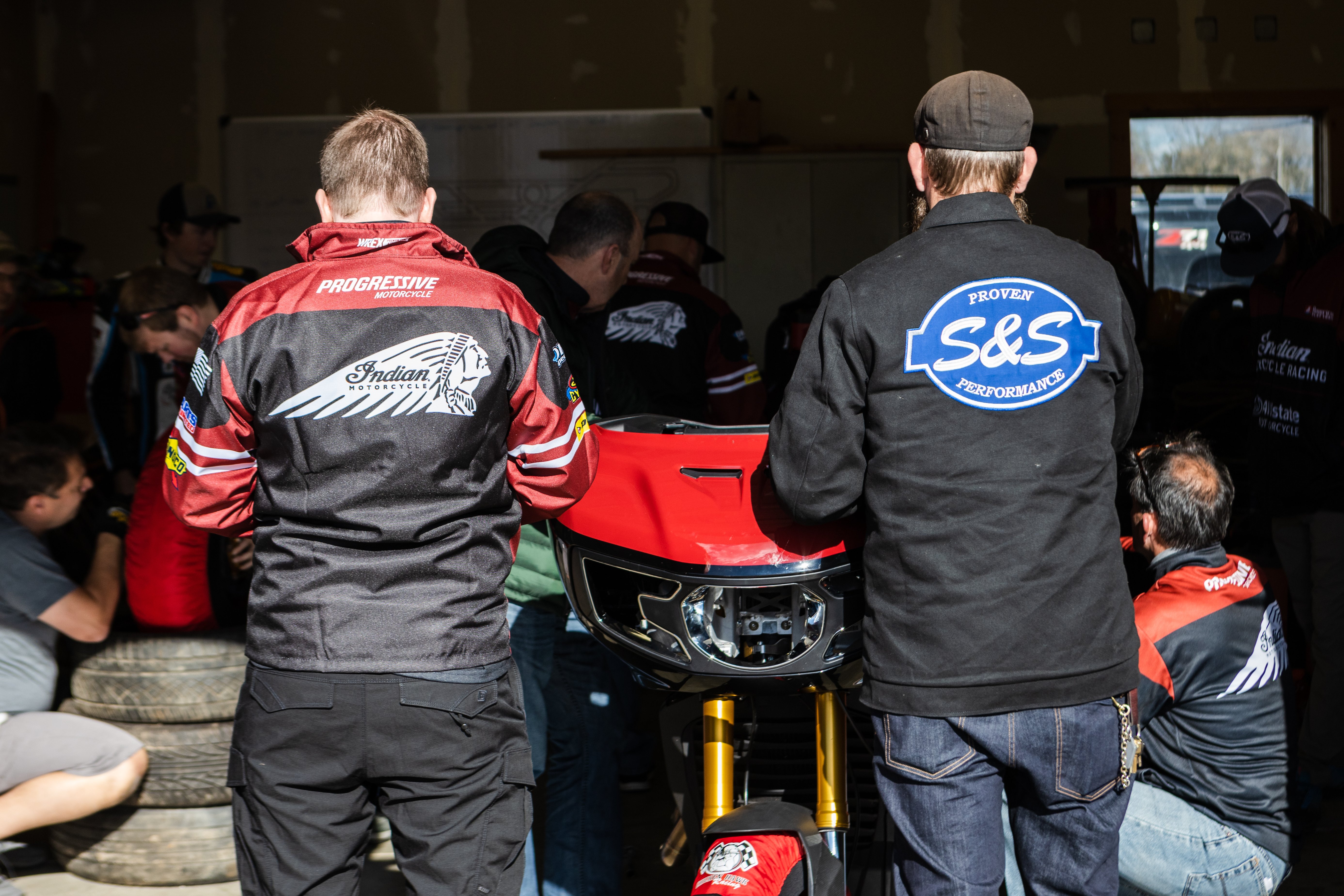