Hector Arana Jr. finished the Pro Stock Motorcycle season on a high note, going from the number one qualifying position to the winner’s circle at the Auto Club Finals at Pomona CA.

While the attention was on Hines and his quest for the championship, Arana Jr. was the star of the event.  He qualified his Lucas Oil S&S-powered Buell number one at 6.832 seconds, recorded the low e.t. (6.808) and top speed (198.17 mph) of the event, and took the second win of the year and ninth of his career.

“We are happy we were able to seal the deal and win the event,” said Arana, Jr. “Sometimes when you qualify number one it jinxes you. I am glad we were able to get the win for the team. It is a real confidence booster for us and a great way to go into the off-season.”

Arana Jr. led qualifying from the onset, recording the 6.832 during the second session on Friday.

Following Arana Jr. on the qualifying sheet were the Harleys of Hines and teammate Eddie Krawiec, the Nitro Fish Buell of Matt Smith and the Bad Boy Buggies Suzuki of Jim Underdahl.

The field was anchored by the popular local rider Freddie Camarena on his Danny Griego Suzuki.  Camarena recorded his first career six-second run at the event and was congratulated by what seemed like the entire PSM pits.  His best of 6.974 held the 16th spot.

A notable non-qualifier was Michael Ray.  After leaving the Star Racing team, Ray made a splash in Las Vegas qualifying third on his independent Gruene Harley-Davidson Buell with tuning my Matt Smith.  Mechanical problems kept Ray from making a full pass at Pomona and he did not make the field.

Notable off the entry sheet was John Hall, the number 8 ranked rider of the Nitro Fish Buell running out of Matt Smith Racing.  Reportedly, a dispute developed between Smith and Hall’s chief mechanic Bobby Webb and Hall decided not to run without Webb.

Hines, who came into the event with a 92 point lead in the Mello Yello points chase, sealed the championship with a first round win over Katie Sullivan.

Arana Jr. held a torrid pace during eliminations.  He ran a 6.83 in round one to oust Camarena, “slowed” to a 6.88 in round two to dispatch the Suzuki of Steve Johnson, and then ran the quick lap of the event at 6.808 to get by the Star Racing Buell of Chaz Kennedy and earn lane choice against Krawiec in the final.

Arana Jr. cut a sharp, .010 light in the final and led the whole way as Krawiec struggled in the suspect right hand lane. Krawiec was out of power just before the finish line as Arana Jr. took the win, 6.832 to 6.977. 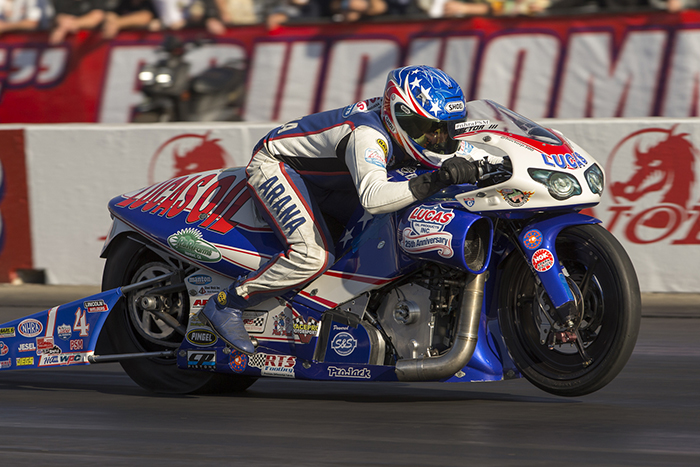 “We’ve been making the right adjustments to stay consistent,” said Arana Jr. “I feel good, the bike is running good that brings all the confidence back. When it is running smooth it is easy to ride.”

Arana Jr. dedicated the win to his brother Adam who will leave the drag racing scene to join the Coast Guard next year.  We wish him well.