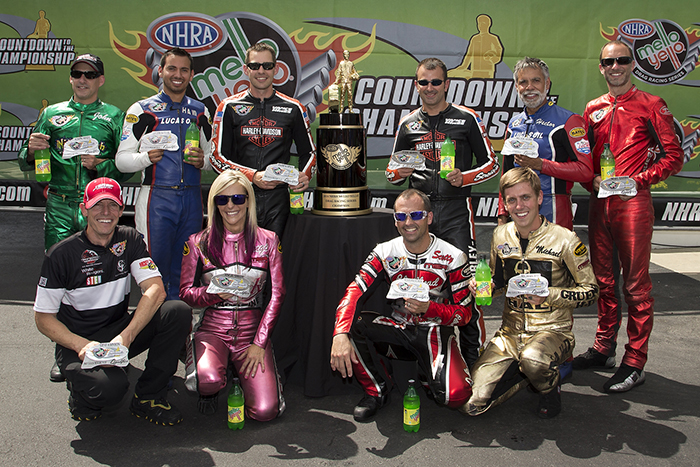 The NHRA Mello Yello Countdown to the Championship kicked off at the Pep Boys Carolina Nationals in Charlotte but the event was over before it began.  Rain postponed Pro Stock Motorcycle eliminations before the first pair of bikes took to the track for round one on Sunday.  Eliminations will be run during the qualifying sessions at the next event on the schedule, Dallas.

There was big news coming into the event when Michael Ray announced he was leaving the Star Racing team following a first round loss in Indy.  Sources stated that sponsor Gottspeed Racing was disappointed that the under-performance of Ray’s bike resulted in first-round losses in four of the last five events.  Gottspeed Racing will back Ray on the Suzuki of Joey Desantis for the remainder of the season. 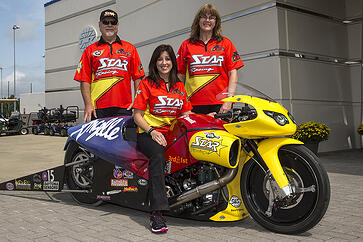 Star Racing’s George Bryce responded with the blockbuster announcement that 3-time series champ Angelle Sampey-Drago will come out of retirement to run the team’s Buell starting either in Dallas or St Louis.

With only 16 bikes entering the Charlotte event qualifying would determine not who would race on Sunday but what the first round matchups would be.

Hector Arana Jr. led the field after the first day of qualifying on his Lucas Oil S&S Buell, running a 6.876 elapsed time at the top speed of the meet, 195.48 mph.

“This means a lot as far as my confidence goes,” said Arana, who qualified number one in Denver this season. “It’s all about confidence. I know I have the equipment to take me to the winner’s circle, but confidence is the key.”

Eddie Krawiec spoiled Arana’s party, edging him out for the number one spot at 6.849 seconds on Saturday to take the pole for the second race in a row.

While qualifying was run under two days of hot and humid conditions, Sunday dawned cool and overcast.  The forecast was for fast.  But there was an underlining issue: with the surrounding Charlotte area getting recent heavy rains, the resultant saturation had caused the rubber on the racing surface to peel. The nitro cars, with their massive amounts of aerodynamic down force, had run their first round of eliminations without incident.

The Pro Stock car class began eliminations with the vehicles skating around on the top end.  NHRA officials halted the action to apply more traction compound but it did not resolve the issue as the cars continued to overpower the available traction until V. Gaines suffered a nasty, high-speed wreck.

The remaining Pro Stock Car competitors immediately began discussions of refusing to race on what they felt were unsafe conditions.  As NHRA officials were surveying the situation the Pro Stock Motorcycle riders gathered to discuss their options.

At around 3:00 rain came into the area and settled the issue.

With three races in a row and the next available date to run the event at Charlotte being in conflict with a NASCAR event, NHRA officials felt their best option was to run the event in Dallas.