STAMPEDE! Of hooligans, that is.. The Born Free Stampede Race

Born Free Motorcycle Show has grown to epic proportions - from a simple chopper show in a parking lot in sunny Southern California, to a big bash in the hills of Trabuco Canyon. 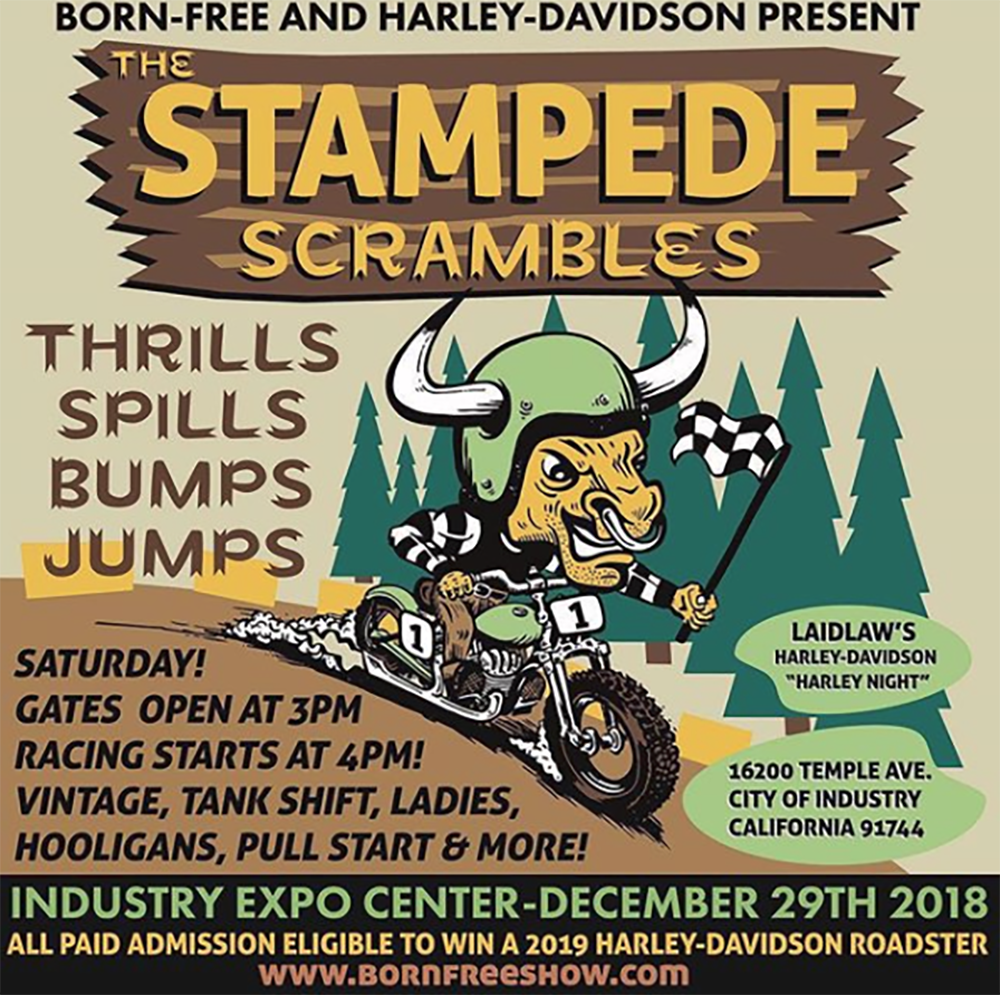 Some of the things the show itself is known for - beautiful choppers, a section devoted to FXRs and Dynas, killer vendors ranging from parts, vintage apparel and helmets, and anything you can think of. Limited cell phone service makes everyone put their phones down and really gives you a chance to enjoy the show, your friends, and all the fun of the weekend-long event. Live music, cold refreshments, and even a dunk tank round out an incredible weekend every year. 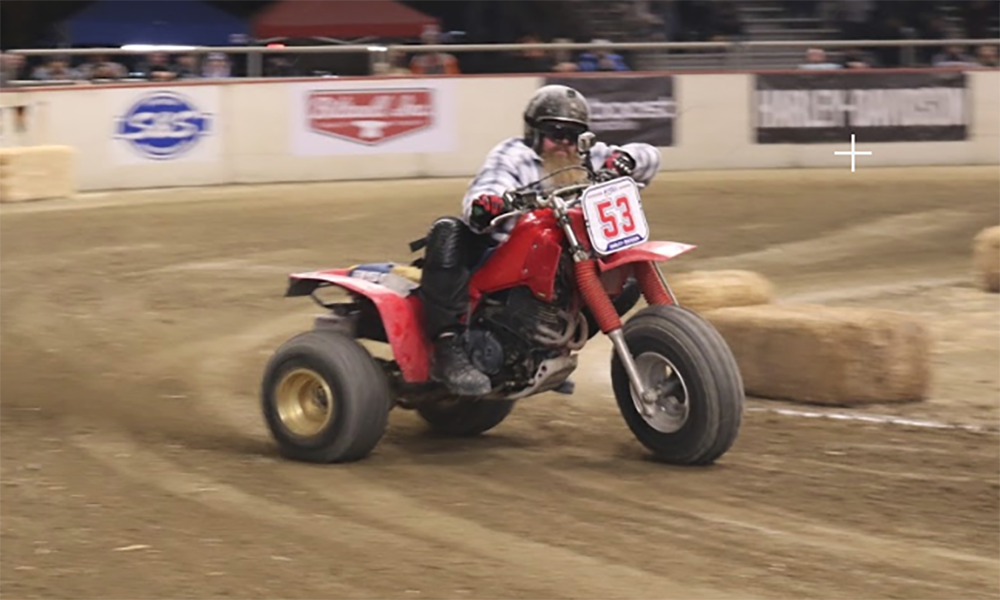 Even some 3 wheelers came sliding around corner 1.

Recently, the BFMS crew added on a racing element - the Born Free Stampede. Taking place at the Industry Raceway, a short jaunt from the canyon where the show takes place. This year, they stepped it up with an off-season race - in December!

A willing break from the snowy winter season here in Wisconsin, we headed out to get in on the action. We met up with some of our favorite hooligans, vintage racers, and even mini bike riders. Everyone from the Biltwell crew, BratStyle, SMCO, Noise Cycles, Rusty Butcher and more brought out their race bikes to end the year off properly - kickin up some dirt and winning some trophies! 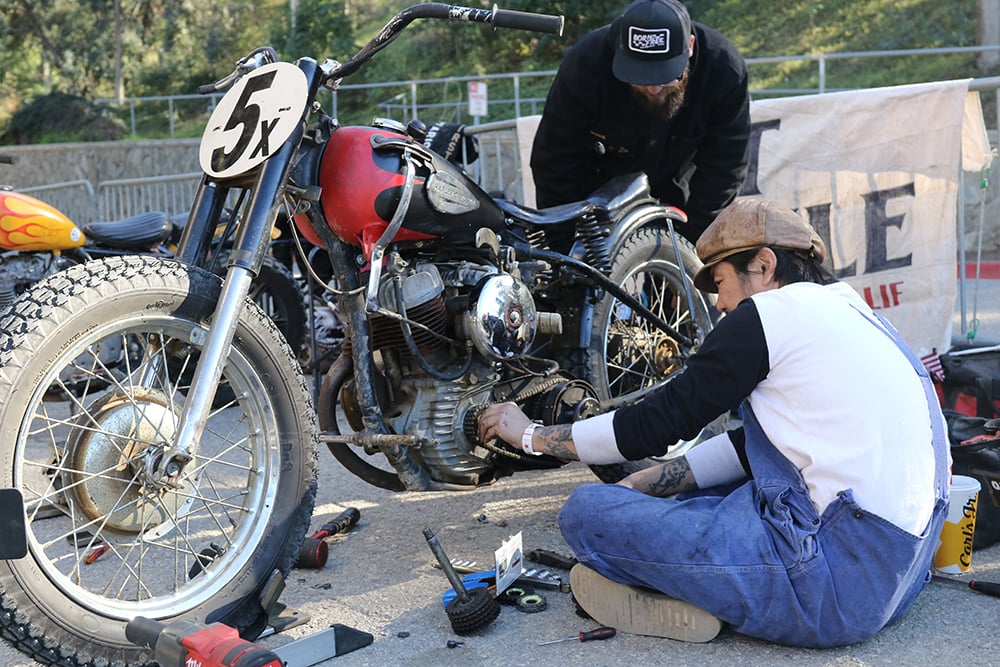 Brat Style's Go Takamine tuning up his tank shift before the race.

The races began like any other - a sight lap for the racers to check out the track prior to the green flag dropping. The crew mixed it up this time, and instead of the standard oval, the track made a large kidney bean shape, throwing a right turn in there - which, surprisingly, tends to throw off a lot of flat track racers who spend the majority of their time turning left.  To shake things up even more, there was not one, but two small jumps - one on the long straightaway, and one just after the right turn. 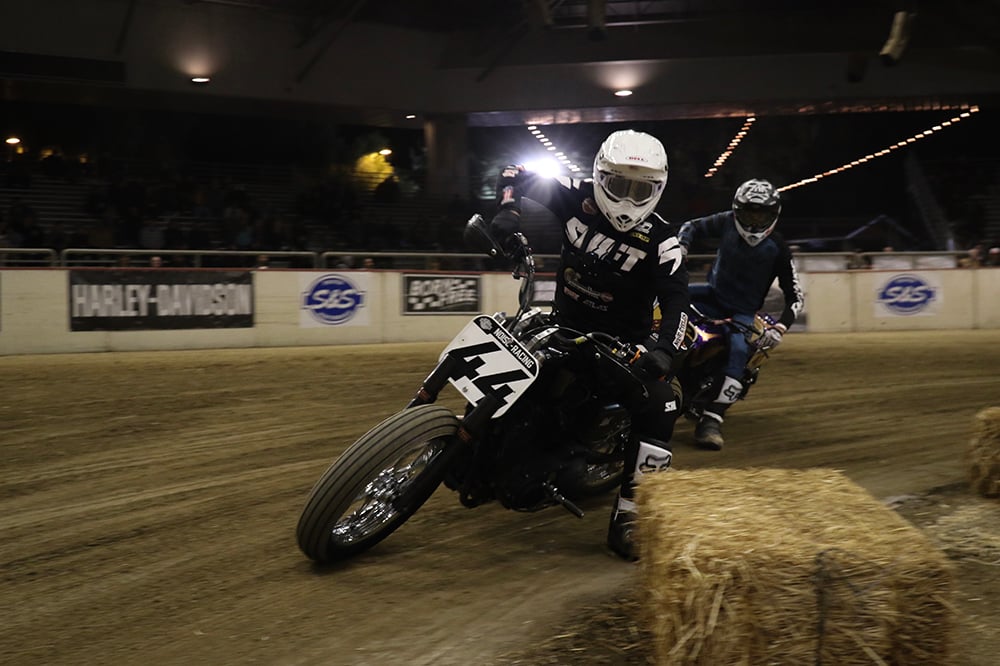 Gonz leaning into turn one.

As the green flag dropped, clutches popped and wheelies were had by some, others spun tires before grabbing traction on the loose track dirt. Generally, on short tracks, the rider who takes the "hole shot" - (getting off the line quickest)  is usually the one who takes the checkered flag. But with the addition of the right turn, and the jumps, a small mistake can let the secondary rider take the win. Add in the risk of taking a soil sample - as in, hitting the dirt, and the chances increase. 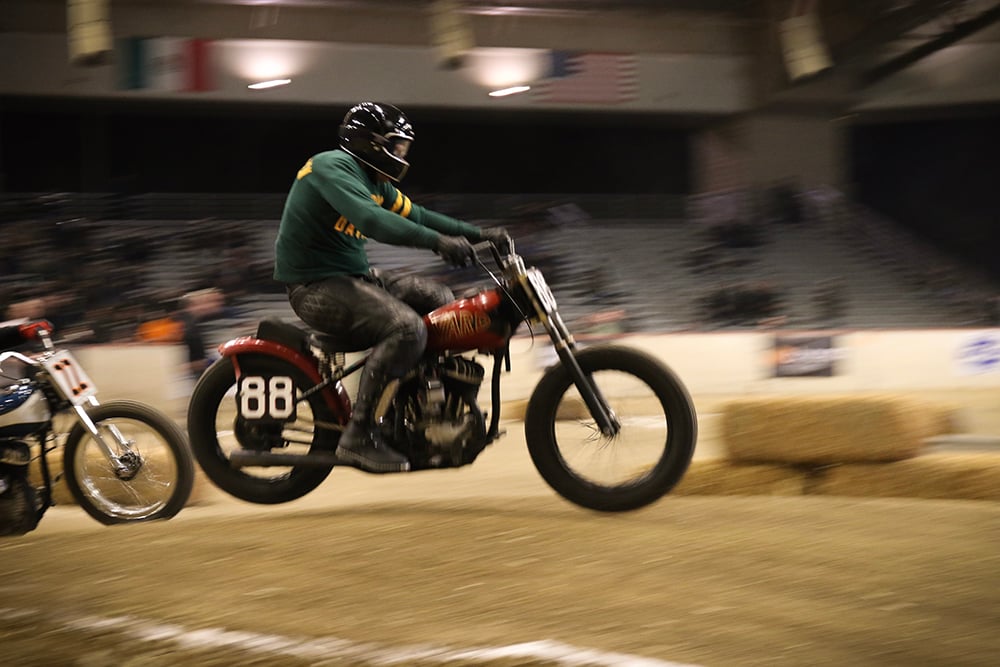 Jeff Leighton takes the jump on the straight

Each class lined up - pull-start mini bikes, some of whom were stock Briggs & Stratton vintage style, some of whom had high bars and chopper styled frames. Vintage singles, from Bultaco's to XT550's. Vintage tank shift bikes, some of which are ridden by the Born Free guys themselves. Women's class, with a variance of bikes, making for a fun class to watch.  And of course, the Hooligans, aboard 750cc+ street bikes, often a difficult task to maneuver on a dirt short track. 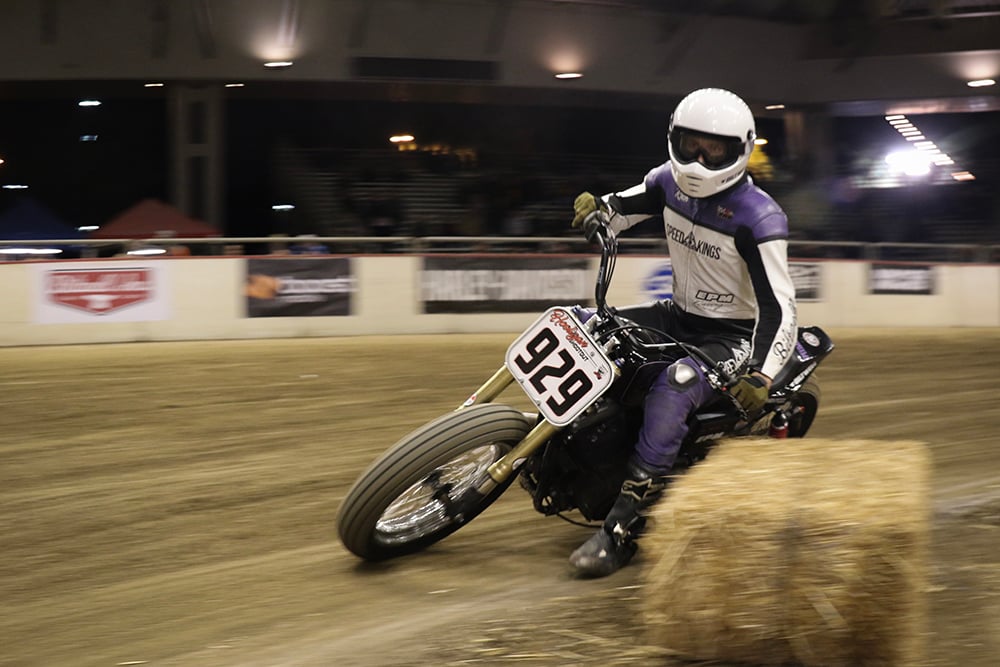 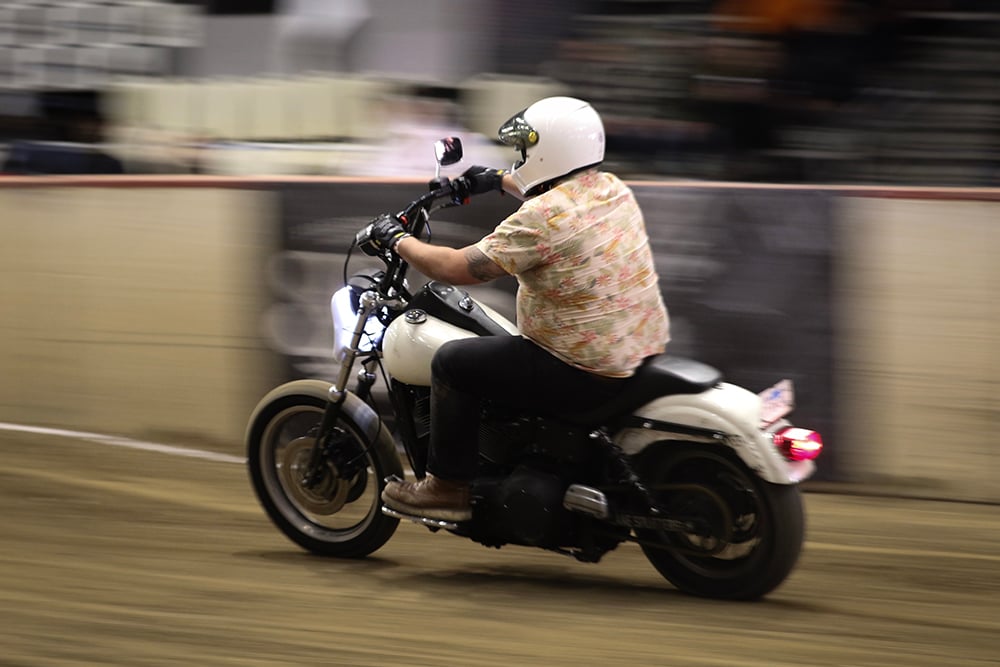 Even an H-D® Dyna® raced the Hooligan class

A good portion of the Hooligans run our S&S Hooligan big bore kits. A couple, like Brandon "Gonz" G. run S&S exhaust, he's got a custom low-pipe setup (he has a personal preference on low pipes as opposed to the often seen high-pipe setup). SMCO's Shaun G. rode his Sporty, also S&S powered, along with Mikey Virus from Rusty Butcher. Lifestyle Cycles brought out their bike, piloted by Mad Dog McConnell.

If you haven't caught a flat track race in person - don't miss it. Even watching a live feed can't come close, because the sights and sounds and smells tie it all together. The smell of two-stroke exhaust, the smell of the dirt, the sounds of the bikes, from the small 50cc pull starts to the rumbling of the Hooligans 1250cc's, the ice cold beers and watching intently as the motorcycles leave the starting line.

Whether you catch a hooligan race, or a professional AFT half-mile race, go to one. You won't regret it! 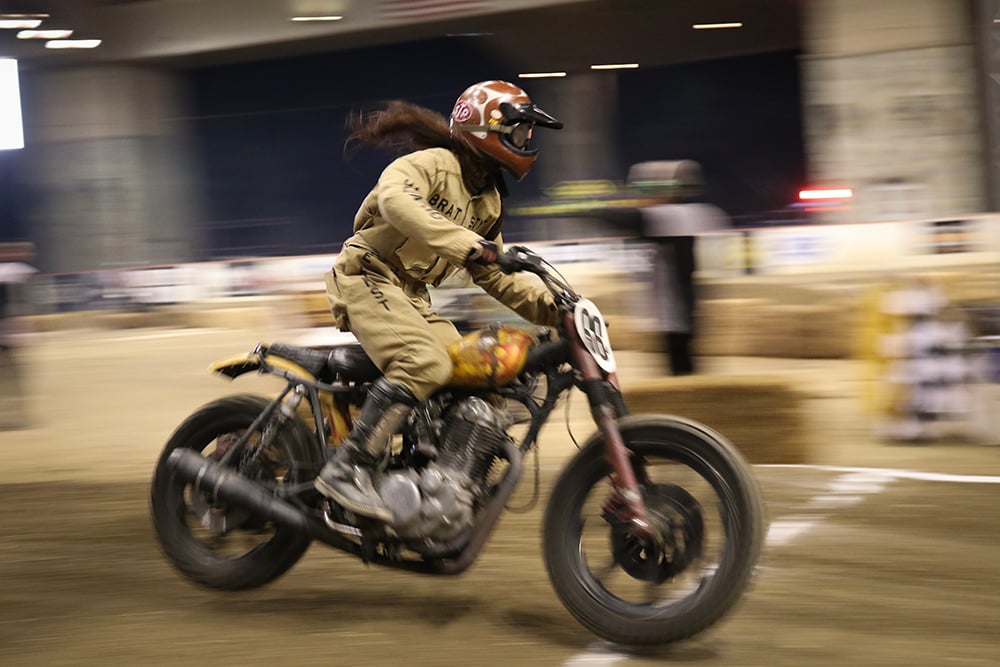 Masumi Tamakine of Brat Style in the Women's class 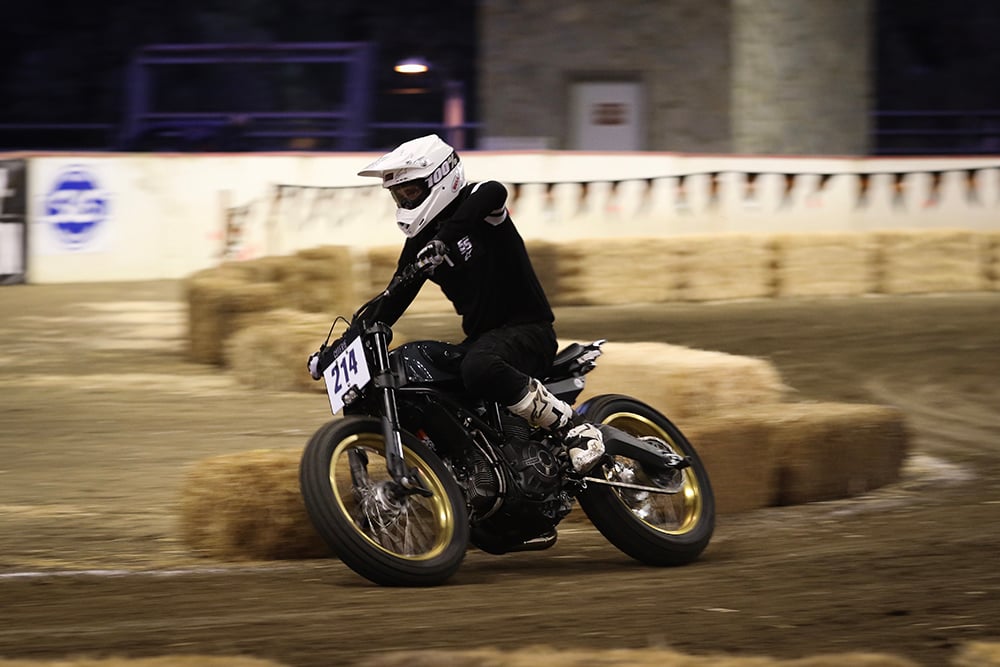 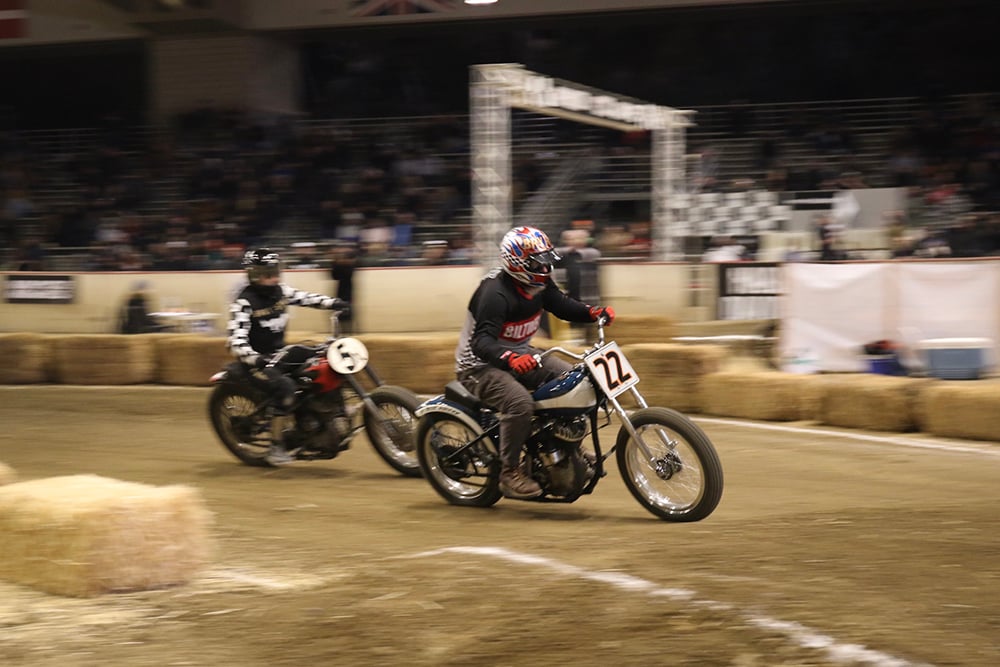 Biltwell's Bill coming around the right turn into the jump 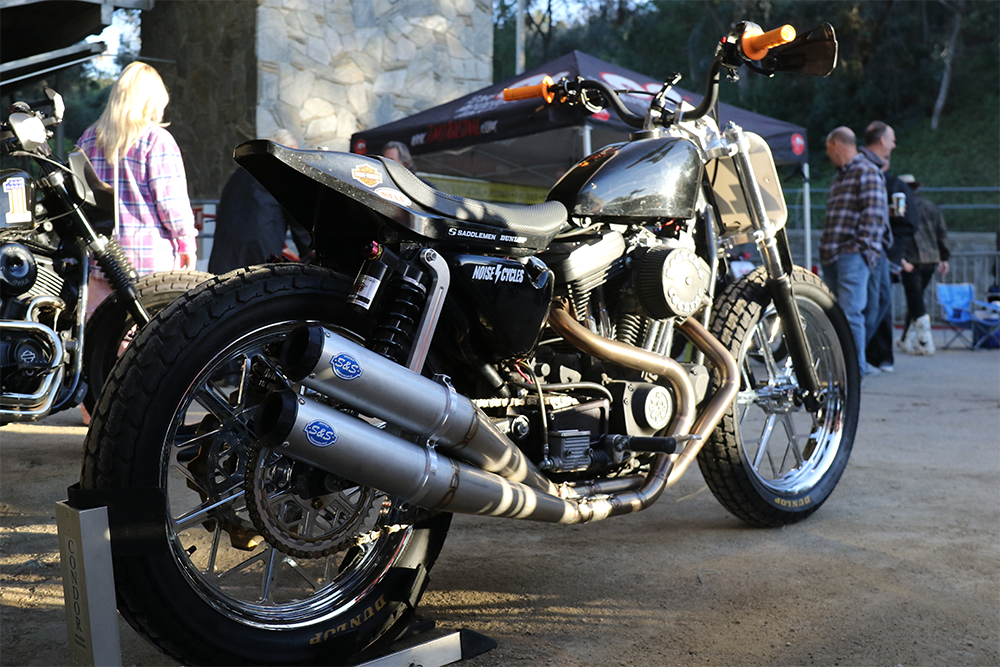 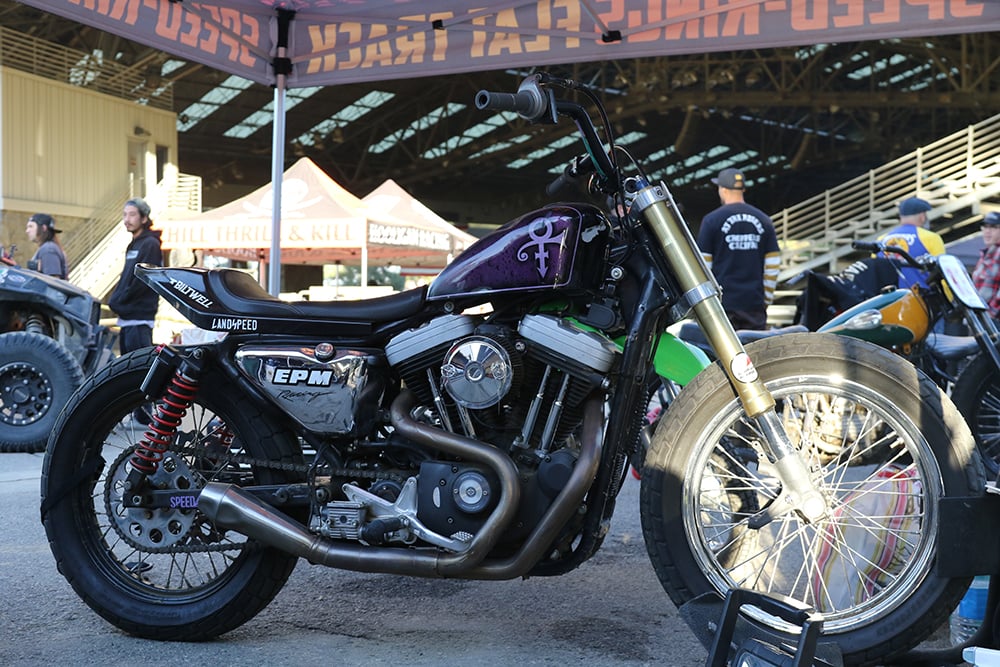 Now, check out the recap video: