By Ken Smith
In 1958 my dad and Stan Stankos had just went into partnership calling the new business S&S Cycle Equipment.

They both had Harley dressers and wanted to use them to showcase some of the parts and new ideas they had been working on and planned to sell. Dad wasn’t interested in using a nice, expensive dresser since he planned to modify it and mold it to his needs. He wanted something light, and a stripped down big twin with chopped rear fender (“chopper” in the Midwest) was just the ticket. A local Harley dealer had bought some police bikes at an auction and was selling them. A non-descript 1953 ex-police bike was perfect, and cheap. 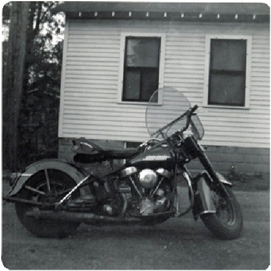 That summer was spent riding the stock ’53 and working at nights and weekends on the new business. There was no time to build the motorcycle he had in mind. Putting product ideas on paper and developing them was his main focus. He and Stanley had made big bore steel cylinders for the Knucklehead they raced at Bonneville in 1954 and they intended to make and sell them along with solid lifter aluminum pushrods, big valve, two carburetor heads and stroker flywheels. A series of accessories they had made and used before was also in the works.

That first year was a losing proposition, all work with little return. Stan’s auto upholstering business was suffering and he decided he wanted out. He needed the security of his business and didn’t have the time it would take to develop S&S.

By early 1959 my ma and dad made the decision to buy him out and make a go of it on their own. They couldn’t quit with some of the new products so close and ready for testing. It was time to start working on the ’53.

The engine was rebuilt using an S&S 4-1/2” stroker kit that included flywheels, cylinder base plates, longer pushrod cover keepers and base studs. Stock cylinders and modified stock pistons made a displacement of 84 cubic inches, 10 more than stock. The heads were modified stock castings with the intake ports welded up and redirected to the left side of the engine. Customers could pick the type of carb they would use and my dad would make the proper mounting bolt pattern. He chose late Linkert carbs for the ’53. In addition to dual carbs, he modified the heads for 2-1/16” intake valves by machining out the old valve seats and threading in new custom made aluminum bronze seats. He tried several aftermarket cams settling on an Isky HH20 with S&S solid lifter pushrods.

Next came the chassis. The rear fender was chopped behind the vertical fender bracket and an aftermarket taillight/license plate bracket assembly was added. The front fender was sectioned down the length and stylized by his brother-in-law, Sid Smith to accommodate an 18” narrower front wheel. The gas tanks and fenders were refinished in his favorite color, red, by his other brother-in-law, Merle Smith. The stock oil tank was modified so it could be filled from the right side and chromed (a service that S&S did on an exchange basis early on). Six inch rise buckhorn style handlebars from Flanders topped off the stock Hydra-Glide fork. With chrome primary chain covers, a few other do-dads and a solo seat, it was ready to roll.

The bike was to be the test bed for products while serving as his “rider”. Early on it was equipped with a prototype dual point, dual coil ignition system with no manual spark retarding mechanism. He had to be on his toes when starting the thing, because if he didn’t have the engine cycled right, it could kick back and launch him over the handlebars. The dual carburetors also presented some problems. To prime the engine with no choke, he would kick the engine over with the switch off and lean the bike to the right to let raw gas run into the cylinders. Needless to say, fires were a constant threat and he had to be ready. He could usually put them out by kicking the engine through with the switch off and sucking the flames back into the engine. Sounds exciting? It was more exciting to watch when it happened. 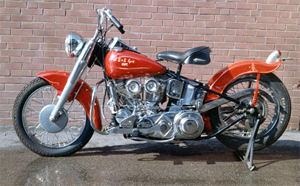 Over the next several years the ’53 red chopper graced the cover of early S&S literature and was ridden all over the South side of the Chicagoland area. During that time it was ridden annually to the Illinois State Fair to watch the Springfield Mile motorcycle races. For longer distances when riding two up where a little more comfort was required, a 1961 H-D FLH was purchased.

In December of 1963, my ma and dad bought the farm where S&S is located now. His dream of farming and moving from the city had finally begun to materialize. In five years when the last child graduated from high school, they planned to sell the house in Blue Island, quit his job and move the business to Wisconsin. They were committed to the move and their plan and some of the summertime activities took a back seat including riding the motorcycles.

By 1966 the farmhouse in Wisconsin had a new basement built under it and needed a modern heating system to make it livable. The job went to Ma’s brother, Sid, who was a journeyman heating and sheetmetal worker. During the summer he got a good used oil furnace from a job and installed it along with all the required ductwork over a weekend. Earlier that year Dad bought a new ’66 Harley dresser so he could study the new cylinder head design. Ironically, Sid had sold his ’56 chopper and was without a bike. Not needing the red ’53 anymore, Dad gave it to Sid for doing the furnace work. It couldn’t have gone to a better home.

In January of 1967 I quit college and started working at an apprenticeship in the printing industry in Chicago. That month a big blizzard hit the Midwest, and Chicago received about 27” of snow over a 24 hour period. The “Big Snow”, as it’s referred to now, paralyzed the city and surrounding area for almost a week. Nothing was moving. Cars were stranded where they got stuck and slowly the snowplows opened one lane areas for only blocks at first. We had a1961 Chevy ½ ton pickup that Dad drove to work. To make it mobile in the deep snow, he tried to find some tire chains. Sid found some near where he lived in Dolton, Illinois about 10-12 miles from Blue Island. Two days after the snow stopped falling I set out walking to Sid’s house to retrieve the chains. When I got there around 1pm, my feet were wet and my uncle said he’d take me home on the ‘53. Sid put a battery in it, a knobby tire on the rear and around about 4pm we were ready to go. With the solo seat Sid had to sit way up on the gas tank which was customary for the driver if you didn’t have a buddy seat in those days. I sat on the back with the box tire chains that weighed about 20 pounds. We took off plowing through the deep snow and drifts. Some of the main roads had been somewhat plowed to clear stalled cars so there were sections with parts of a single lane open. Each time it was the same thing. We‘d have to break through big drifts to get to the ne

xt road. We’d get off and Sid would stand alongside the bike and throttle it through the drift. Often, I’d have to put the chains down and push whenever he needed help. Once we were clear, I’d hop on and off we went. We had to go through many unplowed sections to get to a cleared area. I can still see him seated way up on that tank, elbows sticking out throttling the engine, and snow flying off to the sides like a speed boat as we went along. Sid was amazing! The strength it took to control that bike with me on the back drained him. When we got back to Elm St., it was dark and around 6 o’clock. My ma and dad talked him into staying over and waiting until the next day to return home. What a ride! (see picture – Sid is 6’4”, Ken is 6’1”)

Over the next 3 decades the ’53 went through some changes. The fenders and various other parts were used during the chopper craze of the ‘70s and the bike became a 92” full fendered motorcycle painted black. It became another motorcycle in Sid’s collection and took a backseat there as well to a number of other bikes he preferred to ride. Shortly after Sid retired from S&S in 1994 I asked him what he planned to do with it. Eventually he planned to sell it along with all of the other parts and motorcycles he’s accumulated. I said it would be fitting if it could return to S&S and made a deal for him to restore it. The rest, as they say, is history. It can be seen in the S&S museum outside Viola, Wisconsin and while it’s not identical to the way it was originally built, it’s still the same ’53 red chopper.