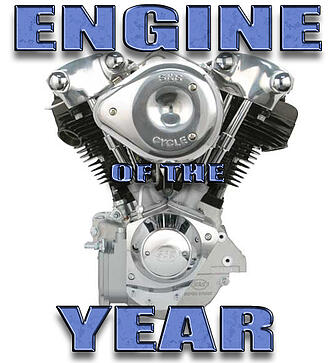 High performance v-twin engine manufacturer, S&S Cycle Inc. announced that they have received the coveted "Engine of the Year" award for the new KN-Kone engine, at a ceremony held during the V-Twin Expo in Cincinnati, Ohio.  The award was given at a ceremony on Saturday evening February 6, at the Duke Energy Center in Cincinnati.  The KN-Kone engine is a new product sold under S&S' Flathead Power® brand of vintage engine parts.

Accepting the award for S&S and Flathead Power were S&S VP of Product Development Scott Sjovall, and Flathead Power product line manager Eric Wangen.  Eric was the driving force behind designing the KN-Kone and getting it into production.  When asked where the KN-Kone rated on a coolness scale of 1 to 10, Eric immediately replied, "It would at least be an 11!" 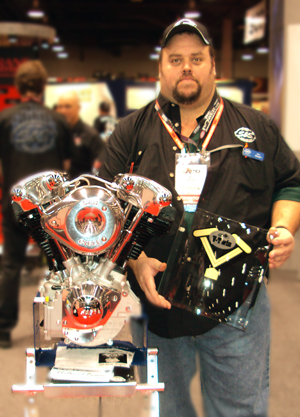 The V-Twin Expo is a three-day dealer-only show, which is presented by Paisano publications, the home of both V-Twin and Easy Riders Magazines.  This is one of the largest, most important, and certainly the most historic shows in the v-twin industry.

The KN-Kone is a cool combination that looks like a knucklehead top end grafted to an alternator style shovelhead crankcase.  The result is a very unique retro looking engine that will drop into any 1970-'99 big twin chassis.  It can be used in an earlier chassis if the longer late style transmission shaft is used.  Klassic knuckle kool has the bright lights of an alternator charging system and the compatibility with the modern primary, clutch, and transmission goodies. The joins an extensive selection of high quality vintage engines and components in the Flathead Power product line.