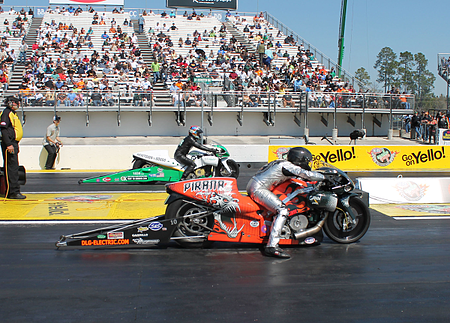 The rare air of Denver bedeviled the Pro Stock Motorcycle competitors at the NHRA Mopar Mile-High Nationals at Bandimere Raceway with surprise performances and outcomes throughout the event.

In the end Shaw Gann – who hasn’t won a race in nearly a decade and was not even ranked in the top ten this season – broke through for the win on the PiranaZ S&S-Powered Buell.

Gann took out points leader Hector Arana Jr. in the final, making this the sixth race in a row that featured an all-S&S final round.

The high altitude at Denver stifles the finely-tuned race machines, which are typically slowed three tenths of a second from what they would run at a track closer to sea level. Some racers adapt to the changes better than others and the Mile-High Nationals frequently sees back-half racers step up and make their mark.

At this year’s event rookie Adam Arana took the pole for the first time in his career, leading both days of qualifying on the MAVTV/ProtectTheHarvest.com Buell. Arana, who had previously qualified no better than fifth, held the provisional pole on Friday with a lap of 7.267 and then lowered the mark to a 7.242 on Saturday.

Following Adam in qualifying was his brother Hector Jr. at 7.279 and local favorite Mike Berry on the Vroom/LAT Racing Oils Buell at 7.281. Race winner Gann qualified fifth at 7.289.

S&S-powered Buells accounted for the top seven qualifiers and 10 of the field of 16.

Five of the top ten-ranked riders were out in round one of eliminations, including recent winners John Hall and Michael Ray. Local racer Berry had his best race of the season, going to the semifinal for the first time since 2010.Hector Arana Jr., who would be appearing in his first final since he opened the season with three straight wins, beat Berry in the semis.

On the other side of the ladder Gann took out Angie Smith and then won a holeshot victory over the Suzuki of Steve Johnson before advancing to the final with a semifinal win over the Harley-Davidson of Andrew Hines. The former champion Hines was appearing in only his first semifinal of the season.

In the final Gann got the holeshot, as Arana Jr. was severely late with a .197 reaction time. Gann had the quicker lap 7.35 to 7.37 to gain his fourth career Wally.

After his last NHRA event title – ironically at Denver in 2004 – Gann has entered 131 races without winning.

“It was a long drought, but if you give up the fight you’re never gonna get out of that drought,” said Gann after final. “This is a big win. My bike has always been fast but I’ve had problems that have plagued me.”

With his final round appearance Arana Jr. was able to pad his points lead and became the first Pro Stock Motorcycle rider to lock into a position in the top 10 for the championship “countdown”. Gann cracked into the top 10 and currently holds the ninth position. S&S-powered Buells hold the top seven spots in the champion chase and eight of the top ten.

The NHRA “Western Swing” continues with the Sonoma Nationals in Sonoma, CA.