My 2012 Bonneville Adventure - by Jeff Bailey

The goal was simple, set a Bonneville land speed record over 200 mph. We had two meets to do it at, the BUB Motorcycle Speed Trials (Aug. 26-30) and World of Speed (Sept 8-11), giving me eight days of racing to work with. The bike had the power to do it and it had proven reliable in the past. The biggest unknown was the new bodywork. Would it go straight? Would it try to fly? Only one way to find out...

This was my first trip to BUB, so the first thing we had to do was understand how they run the event. I started in the MPS-PG 3000 class. This means I had a modified (M), partially streamlined (PS) chassis with a pushrod (P), gas (G) 3000 cc engine. Because this was the first time running the full fairing, I had planned on taking it easy the first run. Even that didn’t go exactly to plan. With a 10-13 mph cross wind, I wasn’t able to even make it through the timing lights after being blown off the course. Not the start I had planned on.

We made sure the alignment was correct, which it was, did a quick 95 mph test run down the return road and headed back out to see if it would go straight. The next run was 201 mph in little to no wind. The bike felt light and not as planted as I would have liked. The 201 did qualify for a record. On the return run the other direction, the wind had picked up, and again I struggled with handling. I wasn’t able to go full throttle and only mustered a 189. This resulted in a 195.732 record. Not 200, but close.

We spent the next two days struggling with handling and traction. I ran a 195.6 and 192 before giving up on the bodywork and switching to a naked (no fairing) class. I hadn’t planned on running the bike naked, so there were plenty of things on the bike that stuck out and made it aerodynamically dirty. We also fabbed up a seat with 2 x 4’s, cardboard and duct tape. Dan Kinsey also went into town looking for any steel or lead weights. The best he could come up with were two 12 lb sledge hammers. We cut the handles off and attached them to the bike with hose clamps and scraps of welded metal.

Now in the M-PG 3000 class, I set off in hopes to set another record. The first run netted a 192.914 mph. The bike felt more planted and hooked up although still not great. The return run started from the other end of the course where the salt was worse and bumpier. I was only able to go 185.235, but that was good for a 189.075 record.

That was the end of the BUB meet, but not an end for this year’s racing. I was happy with the records, but not happy to leave without a 200 mph record.

For the World of Speed (WOS) meet we built a steel skeleton to replace the flat aluminum belly pan used at BUB. Dan also built some brackets that would allow about 60 lbs to be added to the bike. We also went over everything else including pulling the heads and cylinders for inspection. Everything looked great, so with a fresh set of rings, it went back together.

After completing the third 1500 mile trip in a few days, we were back on the salt to take another crack at a 200 mph record. This time it was at the USFRA World of Speed. The salt was good and the wind was calm, so I set off on a test run on Saturday morning. Now in the APS-PF class, I ran 197.7 to qualify on a 184.6 record. The bike really hooked up and felt stable. I knew it had more in it, but I took it as a qualifying pass which meant that I was off to impound for the rest of the day. The next morning we made a return run of 203.4 and it was on the rev limiter the whole mile. We finally had something we could tune on and I could ride. With the PF record in the books at 200.577 mph, I changed to the PG class to go after Chris Rivas’ 201.5 record.

In the afternoon on Monday, the bike made a nearly perfect run of 207.74 mph. It was slightly hitting the rev limiter, but more importantly, it continued to handle well and felt very solid. We decided that raising the rev limiter would be better than pulling another tooth off the rear. I thought for sure the next morning (final day of racing) would yield a solid record over 200.

But the following morning, the weather had changed. It had rained over night and it was cool and windy. We held back in the line of qualifiers hoping the weather would change by the time it was our turn. Luckily it seemed to. The wind died and the sun came out just as the guy ahead of me took off. I was feeling good and took off down the course. At about the 1.75 mile mark, a side wind came up and nearly blew me in to the “Q” that marks the 2.25 mile. I tried correcting the bike and getting back into it and actually ran a 196 through the second mile. I thought that would be enough for the record, but didn’t know about a rule that requires the return speed to be averaged with the speed in the same measured mile. By running it in the second mile, it didn’t count towards my average for a record. 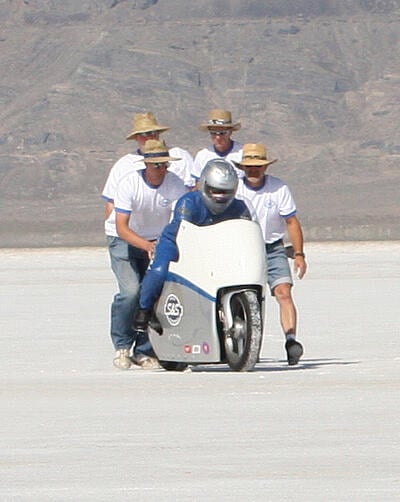 To make things a little more exciting, right before the 4 mile marker, the exhaust weakened the fiberglass on the tail section, causing it to break and flap in the wind at 196 mph. With the wind blowing 10 mph straight across the track, I decided to pull the bodywork and switch to the open A-PG 3000 class and tried to break my own record from 2010 of 180.350 mph. We made two quick runs of 191.84 and 192.151 for an average of 191.995 mph. All I can say about those runs is the wind pressure at that speed is amazing. It was really trying to pull me off the bike.

With two records in the books, it was time to head home. One more day of racing would have probably resulted in the APS-PG record that I really wanted, but it wasn’t meant to be.

We will see what next year brings, but for now I want to thank the many people who helped out. I couldn’t have done this without sponsors like S&S Cycle, AirTech, Jimmy John’s and Spectro Oil. Although many people helped out on the project a few guys were very involved. Dan Kinsey contributed his years of knowledge of Bonneville racing as well as machining and fabrication. Gene Dlask kept the bike in race ready condition and made sure I didn’t do anything dumb. Paul Olesen spent hours reworking the fairing and preparing the bike. Rob, Nevin and Jan took care of EFI, data acq and electronics.